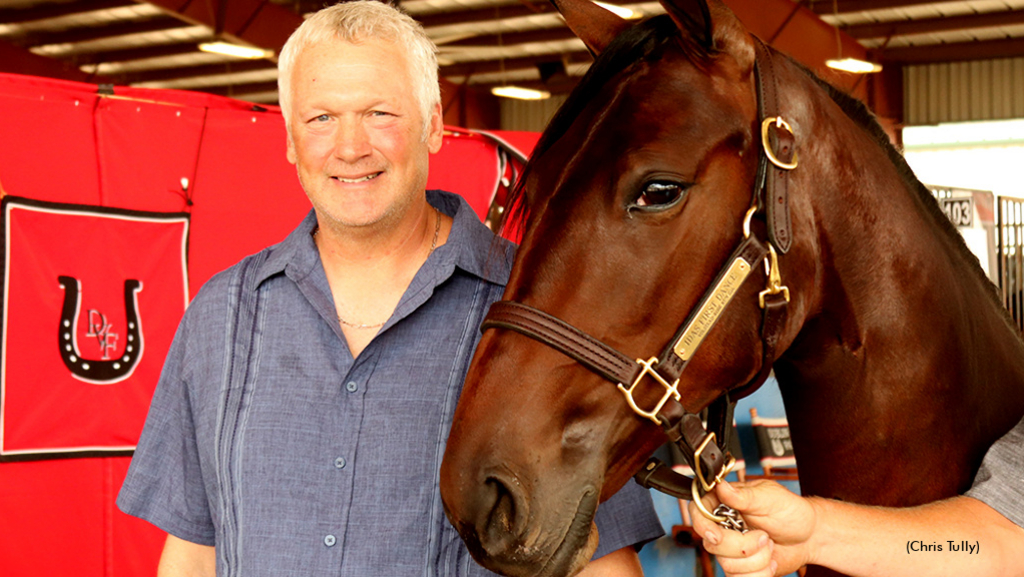 A record price of $170,000 for a trotting yearling sold in the state of was set on Friday at the Ohio Selected Jug Sale at the Pickaway Ag Center in .

The sale topper was hip # 103, Idas First Dance, who was a Volstead filly, first foal from a full sister to 2017 three-year-year-old Trotting Filly of the Year, Rose Run Sydney 4,1:54.1 ($597,703).  Purchased by Thomas Svensen, Agent for Swedish interests, she was consigned and sold by Dublin Valley Farms, Agent, .  She will be trained by Ohio-based trotting master Chris Beaver.

Robert Hershberger, owner of Dublin Valley Farms and one of a dozen breeders that own the sale, was not surprised by the high price.

“We had every confidence in Volstead, and clearly the astute buyers were willing to take a shot on a European champion son of Cantab Hall.  We had a lot of interest in him as a sire earlier in the year, as well as his yearlings this fall.”

Swedish Cup winner and European Champion Volstead 1:51.3f ($773,903), whose record is not indicated on the USTA pedigree pages, was able to overcome the missing data and top the sale in both highest priced yearling, as well as overall average.

“We are very proud that Volstead’s yearlings averaged $67,333,” noted Mr. Hershberger.  “His yearlings looked the part and were well received by the trainers and the buyers.”

The gross sales for 266 yearlings sold was $7,478,500, with this year’s Ohio Selected Jug Yearling Sale enjoying an 2% increase in overall average ($28,115) and a relatively flat gross for seven less horses sold over last year.  The sale was conducted by the Lexington Selected Yearling Sales Co., on behalf of the Ohio Harness Horse Breeders Association, a consortium of nurseries that collectively own the enterprise.

On the pacing side, it was another banner year by Diamond Creek/Sugar Valley Farm’s pacing sire Downbytheseaside, who continued to lead the way with 41 sold for a gross of $1.8 million and an average of $45,780.

The highest priced pacer sold was hip # 102 Cowboy By The Sea, a Downbytheseaside half-brother to Captain Cowgirl p,3,1:49.3f-’22 ($542,038), who brought $127,000 from TheStable.ca's Anthony MacDonald.  Owned and consigned by Jeff and Senena Esty’s Spring Haven Farm, the colt was one of four yearlings by Downbytheseaside that fetched six figure prices.

The Burke brigade was out in force at the Ohio Select Sale, and captured the first six figure yearling of the day, (hip # 87) from the LMN Bred consignment.  Bringing $120,000, the son of Downbytheseaside was the highest priced yearling Mitch and Laura Nault had ever bred and sold.  “We bred and sold this colt’s dam, Graceful Vision,” noted Laura Nault.  “So this was a very special day for us.  We are thrilled he is going to the Burke Stable.”

Ryan Miller, , signed the $115,000 ticket for the highest priced pacing filly sold.  Also by Downbytheseaside, (hip # 275) she from a multiple stakes-winning half-sister to Sectionline Bigry p,1:48-’22 ($896,337).  Consigned by Cool Winds Farm, it was the first six figure yearling ever sold by Randy and Kim Haines.

Racing Hill had the second highest average of pacing sires with 10 or more sold, getting $28,182 each.  Of the first-crop pacing sires, Dancin Yankee led the way with an average of $24,167.