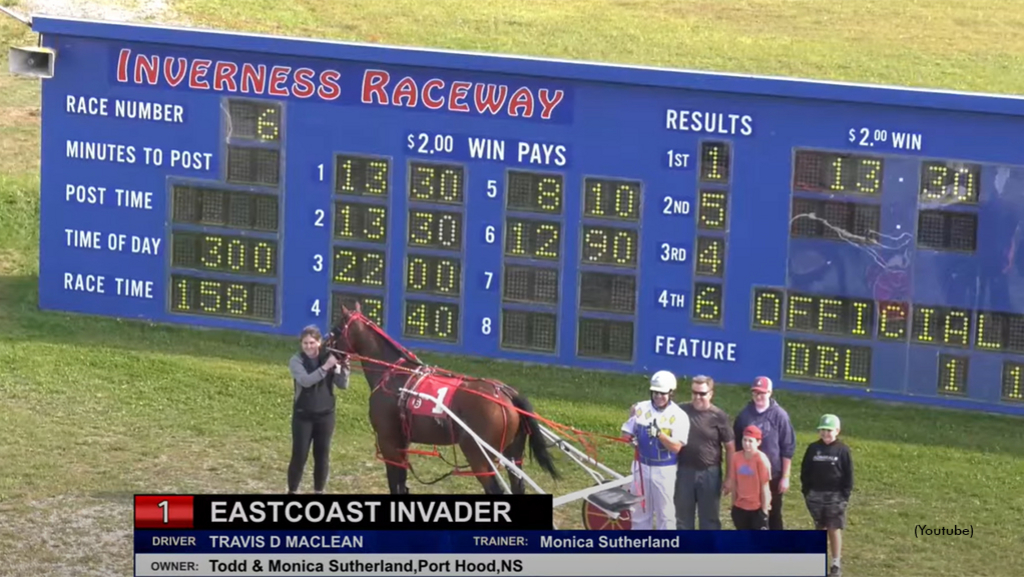 Driver Travis MacLean and Eastcoast Invader capitalized off a front-end duel that left the favourite parked out for most of the mile and snatched the victory in Sunday afternoon's featured Winners Over Pace at Inverness Raceway.

Eastcoast Invader got the first call from the inside heading into the opening turn with Windemere Best Man (Doug MacQuarrie) leaving to his outside and 3-5 favourite Euchred (Redmond Doucet) gaining a short lead as that one fired three-wide.

As they reached the quarter pole in :28.2, Windemere Best Man emerged between rivals with the lead. He cleared to command ahead of Eastcoast Invader and issued the parking ticket to Euchred, leaving the favourite hung out through a :57 half.

Euchred forged on and eventually took over down the backstretch but faced immediate pressure with Eastcoast Invader hot on his heels as they passed three-quarters in 1:27.1. The latter pulled ahead with an eighth of a mile to go and won the $1,950 featured finale by 1-3/4 lengths in 1:58 flat. Rockemsockem Scott (Gerard Kennedy), the 3-1 second choice, followed Eastcoast Invader's winning move on the backside and got up at the finish line to steal the runner-up honours from Euchred.

Sent postward at odds of 5-1, Eastcoast Invader returned $13.30 to win. The victory followed up a dead-heat second-place finish with Rockemsockem Scott behind Euchred in their last match-up on Aug. 31.

The five-year-old homebred gelding by Rollwithitharry earned his second win of the season from 14 starts and his 12th victory lifetime for Todd and Monica Sutherland.