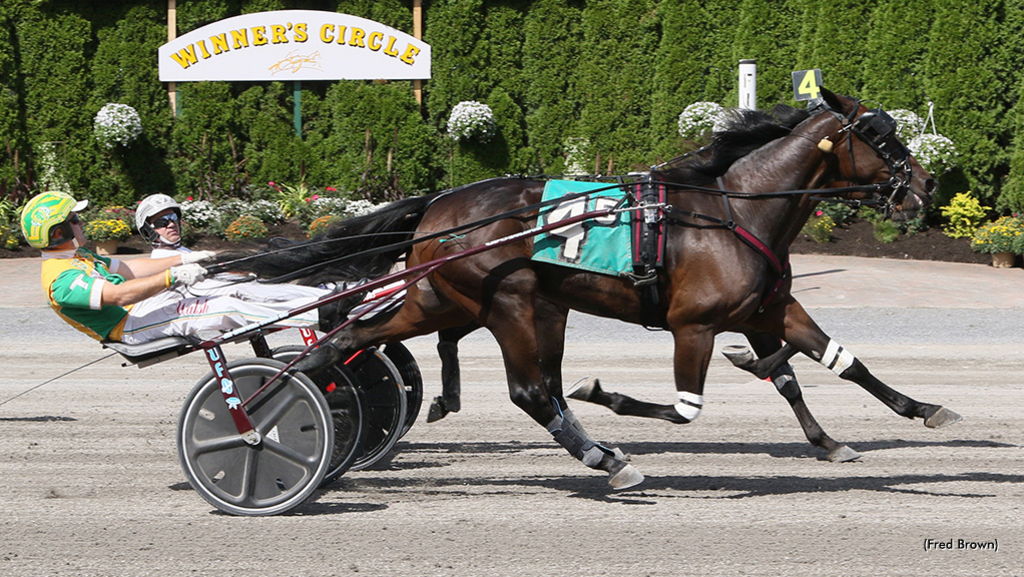 Hambletonian winner Cool Papa Bell (driven by Tim Tetrick) continued his and trainer Jim Campbell's remarkable form spree with a last-step win over Molotov Cocktail in a track-record 1:51.4 in the sophomore colt trot. The Chapter Seven gelding was relentless in his first-over advance and arrived in the nick of time to collect the winner's share, which put him just shy of $900,000 in career earnings for owner Scott Farber as Runthetable Stable. Belmar Racing and Breeding bred the winner.

"I'm very proud of the horse. He's stepped up for the right races and at the right time," said "Papa's" beaming conditioner Campbell in a post-race interview.

Joviality S (Brian Sears) continued her fantastic season with a clean sweep of the NYSS events, completing this season with a dominant 7-3/4-length romp over a game Valentina Blu while reducing the track record she set only a week ago by another fifth to 1:51.2. The remarkably talented and consistent filly was paid the ultimate compliment by her Hall of Fame driver when her recognized her as being the best of the many great trotting fillies he has driven.

Saturday was a very good day for Anders Strom, the owner (as Courant, Inc.) and breeder (as AM Bloodstock, Inc.) of the great Joviality S and her two-year-old sister Kayleigh S, who won the freshman trotting filly championship by getting up in the final step for Sears to nip Ruth Honig in 1:55.4. The sisters are by New York's leading trotting sire Chapter Seven from the imported Muscle Hill dam Pasithea Face S and Marcus Melander is the trainer for both state champions.

Icing on the Chapter Seven cake sweep of the trotting championships came in the first race of the day when The Gruffalo (Dexter Dunn) came from far back early to snap Kierkegaard K in the shadow of the wire in a track-record 1:53.3. Mark Harder trains and owns the colt with Racing Team of America, Deena Frost and Emma Pettersson while Concord Stud Farm is the breeder.

On the pacing side, Fiddler Creek's homebred Messenger Pace champ Pleaseletmeknow (Matt Kakaley) collected his eighth win of 12 starts this season with the three-year-old pacing colt crown. It was an easy ride for Kakaley as he rolled first up to the lead just past the half and had nary an anxious moment from there. Seven Hundred held well for second. Travis Alexander conditions the American Ideal gelding, who eclipsed a half million dollars in career earnings with the score.

The sophomore pacing filly winner was Just Divine (Jordan Stratton), who benefitted from a knock-down drag-out between favourite Gotthegreenlight and Valar Dohaeris (who held for the place). She then tipped off her cover and marched home on her own. The daughter of Huntsville was bred by Steve Jones and races out of the Ron Burke stable for owners Bill Donovan, Craig Henderson, Joe Sbrocco and Purnell & Libby.

Freshman pacing filly Twin B Joe Fresh (Dexter Dunn) clipped a second off the track standard for her division with an effortless two length 1:50.4 score over Earthwindandfire. The daughter of Roll With Joe is right at the top of the division nationally and was winning her fifth of seven for owners, trainer Chris Ryder, his long time assistant Pete Trebotica, driver Dunn and Barry Spak. That group plucked her from breeder Brittany Farms last fall in Kentucky.

"Full of confidence in her," was Dunn's post-race remarks on the fast filly.

American Fling (Jason Bartlett) reverted to his early season form just in time for trainer Ed Hart as he copped the freshman colt pacing crown and reduced the two-year-old gelding Tioga record by two seconds with a first-over grind to wear down Huntinthelastdolar late. It was his fifth win on the season for owners Randy Bendis, Reed Broadway and Tom Pollack as Pollack Racing. White Birch Farm bred the American Ideal gelding.

With many supporting events and perfect weather, the "Day of Champions" was a smashing success in its first appearance at Tioga Downs.

But after a great afternoon of racing, Tioga had to cancel its evening performance after five races due to a power outage affecting track lighting.