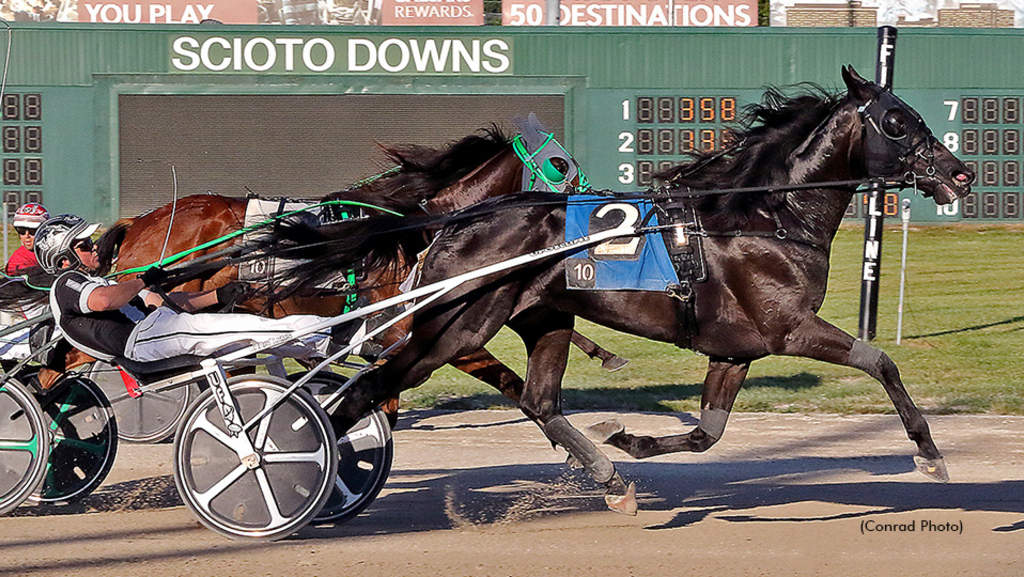 Black Magic sat patiently through the first three-quarters before making a charge down the stretch to win the $75,000 Ohio Sires Stakes fourth leg for two-year-old colt trotters at Eldorado Scioto Downs on Friday, Sept. 9.

Nine freshman trotting colts went to the gate with A Real Legend the 4-5 favourite.

Off the gate, Jet Hill shot to the lead, but Rumble Strips roared past to take the lead at the quarter in :27.4. A Real Legend, with Don Irvine Jr., did not wait and immediately took over the lead, covering the half in :55.2 and three-quarters in 1:24.1.

Black Magic and Chris Lems sat fourth, six lengths back, as the field moved up the backstretch. Around the final turn, Lems looked for racing room but had to wait for the top of the stretch before it opened up.  He guided Black Magic to the middle of the racetrack, where the son of Full Count dug in and set his sights on the leaders.

Black Magic blew past A Real Legend and caught Jet Hill and Rumble Strips at the wire to win by a head in a track record 1:55.1. Jet Hill finished second with Rumble Strips third.

Trained by Steve Cross, Black Magic earned his second win in the Sires Stakes and sixth in eight starts.  He has now earned $179,850 for the ownership group of Richard Gutnick, Thomas Pontone and Joseph Lozito Jr.