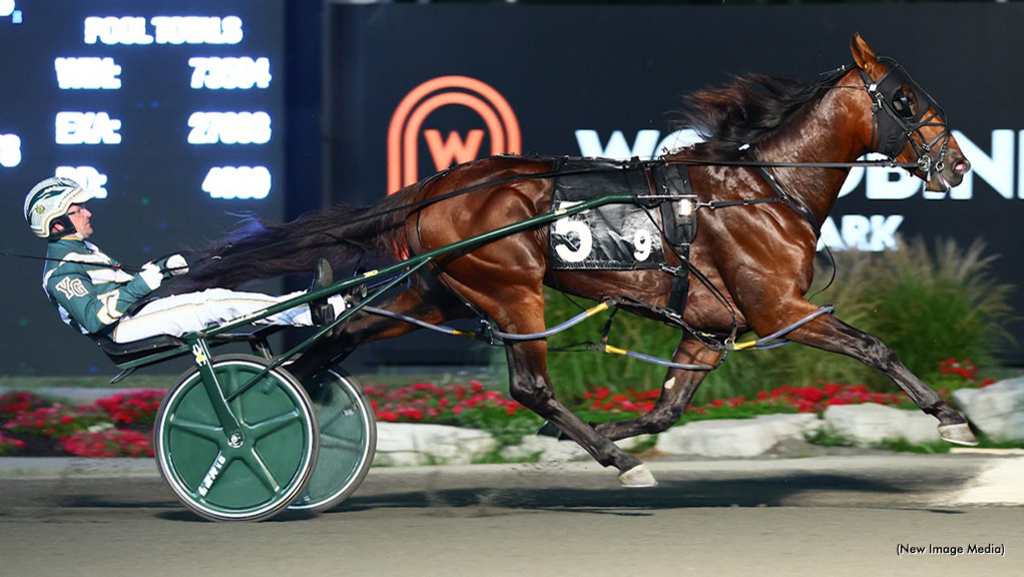 Both Simcoe divisions had a half dozen colts entered, however the second was reduced to four starters with the scratches of Stonebridge Helios and Greatest Ending. Beach Glass, one of the top colts in this division and this year’s Meadowlands Pace champ, made it look easy.

Yannick Gingras took his time before committing Beach Glass to the front and they reached the quarter in a very leisurely ​:29.1. ​The half was passed in :58 and three-quarters was tripped in 1:25.4. Beach Glass opened his lead down the lane, winning by more than five lengths in 1:51.1 with track announcer Ken Middleton calling ​it a "$40,000 training mile." Frozen Hanover was second followed by Betterhavemymoney and Macho Phil.

Beach Glass’s 2022 summary now reads 7-3-0 in 10 starts for owner-breeder Schooner II Stable of Truro, N.S., and trainer Brent MacGrath. He is the first foal from their mare Im With Her.

“It was a good mile for him, he was strong getting home in :25 and a piece. A good stretch out for him. He’s off to Lexington next so he needed that. He’ll then have a week off then the Breeders Crown and then off to Dover (Progress Pace),” said McGrath.

“I would say he’s better, he’s stronger, he’s gotten taller. Luc Blais said that to me in the paddock tonight, usually they don’t do that at three. ​These three weeks off that he’s had really, really worked out well for him. He put on some weight, he picked himself back up. I didn’t train him very tough and I was a little bit concerned he might be a little short in this race. Obviously he wasn’t.”

Beach Glass came into tonight’s contest with $991,025 earned in his career, so the effort made him the sport’s newest millionaire and McGrath’s second following the colt’s sire — the late, great Somebeachsomewhere.

When asked how it feels to have two millionaires come from his small stable he responded: ​“It’s unbelievable, I don’t know how they fell into our hands. We got lucky to get Beach and to get this colt out of that mare, we’ve been very fortunate.”

Fourever Boy’s impressive victory in the first $85,112 split was a special one for his trainer and co-owner Tim Twaddle, who raced on this circuit for many years before settling at The Meadows in Pennsylvania.

“It’s a real special night. It was a real treat to get my family out here, my dad is 95 and was able to join us,” said a smiling Twaddle after the winners’ circle presentations. Twaddle and Micki Rae Stables purchased the colt as a yearling for $50,000.

Fourever Boy was sent the favourite and he didn’t disappoint, winning easily in 1:49.

As that race got underway, Sport Secret left from the far outside to take the lead from the simply named Ron as the field went into the first turn. Sports Secret paced by the opening panel in :26.4. The colts were content to sit single final until just before the half when Dexter Dunn pulled Fourever Boy from third and took over the lead at the half in :55.1. He cruised then cruised to three-quarters in 1:22.2. He could not be caught down the lane as he was a comfortable winner with his ear plugs still in place. Ron took second and it was a close call between Sport Secret and Dreamfair Arnie in third and fourth respectively.

“We paid him into [the Simcoe] early and we always had this as a target and I’m just happy he was good enough and sharp enough to be effective. He’s just getting better and better,” said Twaddle. “He fools you, he’s very good to himself I can go a mile in three minutes or I can go a mile in 1:52, he just waits for me to ask him. He lies down a lot and is just a pleasure to be around.”

Twaddle was quick to give praise to driver Mike Wilder for giving the colt his good foundation and education. “My good friend Mike Wilder raced him the last year and a half and I don’t think we would be where we are right now if it wasn’t for the way he took care of him and got him to where he could race hard.”

When asked why it’s special to come home and win a Grand Circuit race the St. Catharines, Ontario native said: “Most of my fondest memories are right here. I won the Metro here (with Shipps Saint in 1991) and that was a big deal as it was the first really big race I won.

“I remember speaking to Paul MacDonell because I used to get so nervous racing for Ontario Sires Stakes money and he was driving big, big horses and I said ‘how do you do it?’ And he said ‘once you win that one big one you’re going to be okay’ and he was right. We weren’t expected to win that night, we were 50-1, but after that it was a piece of cake. It didn’t matter how much we were going for it was normal. That was a big memory, winning that race here.”

They could have another big memory coming up soon as Tim said the colt’s next start will be in the coveted Little Brown Jug: “We’re going to the Jug, I can’t wait.”

A son of Sweet Lou, Fourever Boy notched his third win in 15 starts this year and upped his seasonal bankroll to over $300,000. He is the fourth foal from the Mach Three mare Macharoundtheclock, a mare Twaddle trained during her last three years of racing.

Not many trainers want a dead heat, but that’s what Nick Gallucci was hoping for at the conclusion of the single Simcoe Stakes division for three-year-old pacing fillies on Saturday at Woodbine Mohawk Park. His pupils, Silver Label and Velvet Stinger, finished inches apart at the wire.

Silver Label came into the $163,734 contest riding a three-race winning streak and was sent the favourite, and James MacDonald raced her accordingly. After Shanghai Seelster paced by the opener in :27.2, Silver Label came calling and settled on top well before the :56 half.​ She opened three lengths by the 1:24.1 third panel, but her stablemate Velvet Stinger and driver Louis-Philippe Roy came closing hard in the last eighth to prevail in a photo finish at the end of a 1:51 mile. In The Mood was right there for third with Got The Gold and Shanghai Seelster earning the final cheques.

“I’m pretty surprised actually,” Gallucci said of the result. “Especially when Silver Label got loose on them at the head of the lane I didn’t think she’d get caught but give this filly a target and she’s going to hunt them.

“I’m very proud of both fillies. Just because of the streak Silver was on I was kind of cheering for her but at the wire I was hoping for a dead heat.”

It was the seventh win in a dozen starts this year for the Bettors Delight daughter, who upped her 2022 bankroll over $200,000. Both fillies are homebreds owned by Millar Farms of Stouffville, Ont. She is the first foal of the $258,000 winning mare Our Hot Majorette who was a fixture on the WEG circuit during her career.

Velvet Stinger started out this year in the Ontario Sires Stakes Grassroots program but has moved up into the Gold lately and earned a win in that exclusive club at Rideau Carleton in late August.

“Initially I was just hoping she’d be a decent Grassrooter but every week she just gets better and better. If she gets a target she’s going to keep digging. Silver sometimes on a lead, she can get a little bit weak like that. She did look a little vulnerable before the wire.”

The two fillies are now scheduled to start in the next Gold event, Sept. 26 at Mohawk, and Gallucci hopes to have their O’Brien Award winning stablemate Prohibition Legal, who has been off since early July, entered as well.