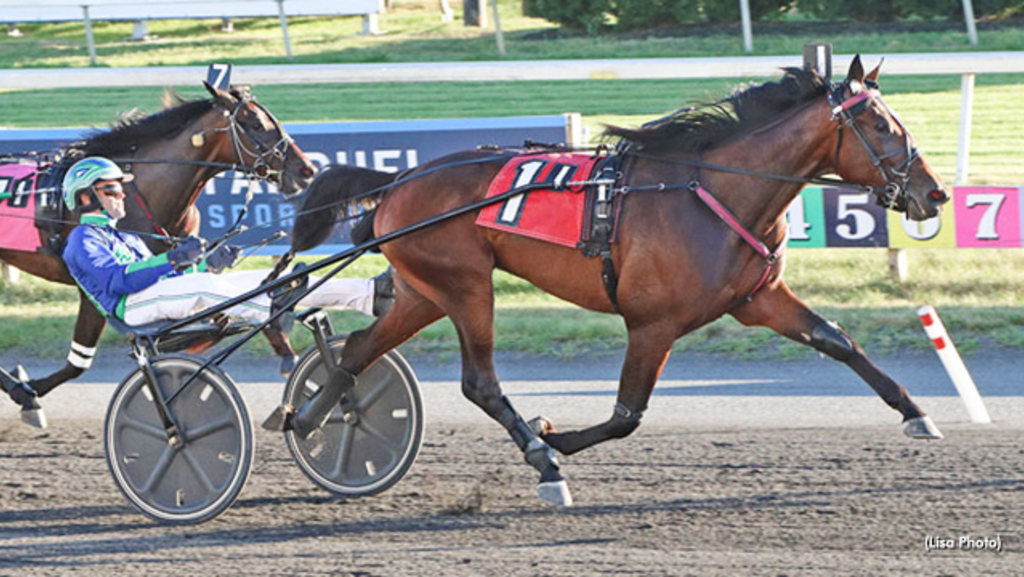 It was three weeks ago on Hambletonian Day that Instagram Model came from off the pace to take the $355,000 Jim Doherty Memorial in a lifetime-best 1:53, so it came as no surprise when the daughter of Chapter Seven-Check Out Trixie won a $20,000 division of the Kindergarten Series for two-year-old trotting fillies at The Meadowlands Thursday night (Sept. 1) as the mile oval kicked off an eight-card September “mini meet”.

The Annie Stoebe trainee, whose last start resulted in a dominant four-length score in New York Sire Stakes action on Aug. 19 at Vernon Downs, scored for the fourth time from just five starts after sitting a pocket trip behind Grand Fashion.

After grabbing the lead at the head of the stretch, Instagram Model went to a 1-3/4-length win in 1:56 to up her win streak to three. She returned $2.40 to her backers with Andy McCarthy driving as the 1-5 public choice, and in the process, upped her lifetime bankroll to $206,575. Grand Fashion held second with Defacement third.

After the Doherty, Stoebe told DRF Harness: “When it comes to staking any horse, I like to pick two major races that I want to win. I went with the Doherty and the [Oct. 28] Breeders Crown [at Woodbine Mohawk Park]. Her entire schedule revolves around those two races. I amazingly accomplished my first goal and the next goal is to have her ready for the Breeders Crown.”

IT TAKES TWO: Trainer Chris Ryder had a pair of winners on the night, scoring with Lisa Lane (Lazarus N-Special Kay Deo) in a Kindergarten division for two-year-old pacing fillies, and with Goldin Greatness (Huntsville-Bet On Hill) in a split for two-year-old pacing males. Chris’ son Patrick drove Lisa Lane, giving him his first win at The Meadowlands. Three-time defending Dan Patch Driver of the Year Dexter Dunn was in the bike behind Goldin Greatness.

TIM TERRIFIC: Reflecting on winning his 13,000th career race at Harrah’s Philadelphia with Sir Isaac Newton on Wednesday, Tim Tetrick told the Big M’s Jessica Otten: “It’s pretty special for a kid who thought he’d be a groom.” Tetrick, who was inducted into the Hall of Fame two years ago, won his first race with Travelin Legacy for a purse of $1,168. Since then, he’s won five Meadowlands Paces, four Driver of the Year Awards and has amassed lifetime earnings of almost $250 million.