A fourth-place finish in his last start would appear to be just an aberration for Tall Dark Stranger, who manhandled his rivals in the 2020 Cane Pace -- the first leg of pacing's Triple Crown -- during the Hambletonian Day card at The Meadowlands on Saturday (August 8). 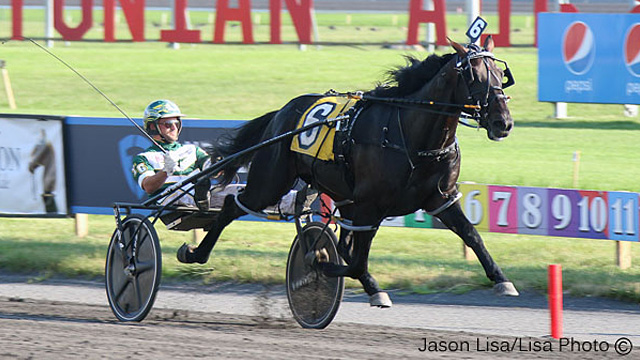 With regular pilot Yannick Gingras at the controls, 3/5 choice Tall Dark Stranger was fifth and overland early as Manticore (Jordan Stratton) and Captain Kirk (Joe Bongiorno) took turns on the early lead through a :26.2 first quarter. Gingras hustled Tall Dark Stranger to the front and cleared to the top around the three-eighths mark. After middle fractions of :53.1 and 1:21, Tall Dark Stranger turned on the jets through a :26.1 final panel to pull away and trip the timer in a stakes record 1:47.1. Capt Midnight (Andy McCarthy) and Captain Kirk completed the triactor.

The win for Tall Dark Stranger was the fourth on the card for Gingras and third for Takter, who added Lasix to the colt's routine after his fourth-place finish in the Geers.

"He was better today...he bled a little bit last week. It was just one of those things: horses get beat, you can't get all worked up about it, you just have to fix the problem.

"Yannick said that if he would have known that he was that close [to the world record of 1:46.4] he would have let him go a little bit in that third quarter, but he raced super and we're just thrilled with him."