Is it safe to say he's back? After an inconsistent start to his four-year-old campaign, Bettors Wish was an absolute beast in his best race this season to prevail in the $229,660 Sam McKee Memorial for older pacers on Hambletonian Day at The Meadowlands. 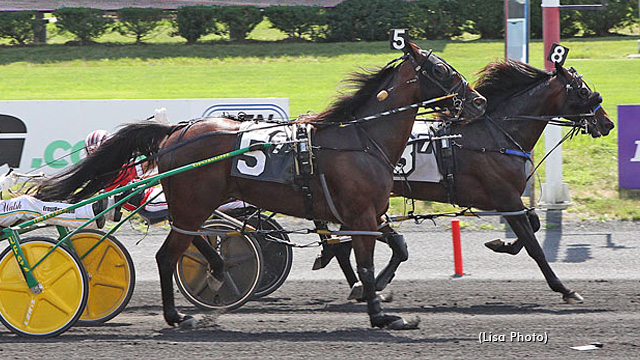 Driver Dexter Dunn was intent on a forward placement with Bettors Wish, leaving strongly from post eight and clearing to the front after Backstreet Shadow (Tim Tetrick) clicked off the opening panel in :25.3. Favoured Dancin Lou (Brian Sears) was also looking for a spot on the front end, and the two four-year-old rekindled their rivalry from 2019 through a sizzling :52.1 half. Bettors Wish disposed of Dancin Lou through a dazzling 1:19.4 third station but had to deal with a fresh threat in pocket-sitter Backstreet Shadow. Tetrick angled Backstreet Shadow for a shot at the leader but Bettors Wish dug deep for the lifetime best 1:47.3 victory. Canadian-based hopeful Century Farroh (David Miller) came flying late to finish third just two lengths back of the leaders.

“We were going pretty hard, but he’s just such a tough horse and he never gives in,” Dunn said. “He got a little tired at the end off those fractions, but he stuck his head out.

“He’s done that his whole career. He’s given 110 percent every time and put up some amazing performances. It’s a pleasure to drive him.”

“It’s a great race to win,” Ryder said. “It’s hard to describe. It’s an honour to win it for Sam. I hope he’s looking down on us today.”