The thrilling 2020 Hambletonian Day program has concluded with a number of impressive performances coming during the stakes-packed card of harness racing at The Meadowlands Racetrack in East Rutherford. N.J. 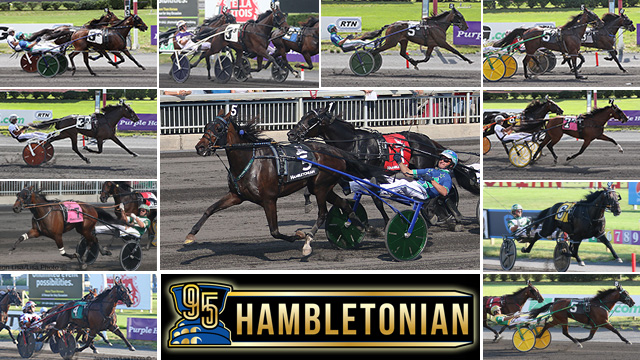 All-source North American wagering on the 16-race Hambo Day card totaled $5,730,615, by far the highest total in the industry in 2020. It marked the second time during the 41-program meeting where wagering topped the $5-million plateau.

On 33 occasions, wagering went past the $2.5-million mark, while the $3-million barrier was busted 10 times.

Wagering totals from international outlets will not be known for several days.

Andy McCarthy not only won his first Hambletonian, but was the top driver on Hambo Day, winning five times. Tony Alagna trained three to victory lane, all were driven by McCarthy.

Trot Insider recapped the action, and those recaps are available below.

No driver has had more 21st century success in the Hambletonian Oaks than Yannick Gingras, and he added another Oaks title with 2020 champ Sorella during the Saturday (August 8) card of harness racing at The Meadowlands...read on

Gimpanzee Mows Them Down In Cashman Memorial

Driver Brian Sears showed an incredible amount of patience and trust in piloting Gimpanzee to a stakes record-equalling performance in the $291,350 John Cashman Memorial...read on

A fourth-place finish in his last start would appear to be just an aberration for Tall Dark Stranger, who manhandled his rivals in the 2020 Cane Pace -- the first leg of pacing's Triple Crown -- during the Hambletonian Day card at The Meadowlands on Saturday (August 8)...read on

Is it safe to say he's back? After an inconsistent start to his four-year-old campaign, Bettors Wish was an absolute beast in his best race this season to prevail in the $229,660 Sam McKee Memorial for older pacers on Hambletonian Day at The Meadowlands...read on

After pulling off a 12-1 upset in an elimination victory one week ago, Darlene Hanover was sent off as the even-money favourite in the $350,300 Jim Doherty Memorial and she didn’t disappoint her army of pari-mutuel supporters...read on

Driver Brian Sears has pulled off some amazing feats over the course of his career, but on Saturday afternoon he pulled a rabbit out of his hat – or helmet if you prefer – when he rallied Zenith Stride to a startling upset in the $319,000 Peter Haughton Memorial...read on

Shartin N made it three in a row in the Lady Liberty for pacing mares, winning Saturday’s (Aug. 8) $177,100 edition by one length over Major Occasion A in 1:48.2 at The Meadowlands...read on

When Dovescry Upsets In Steele Memorial

All eyes were on heavily-favoured Manchego in the $166,550 Dr. John R. Steele Memorial, but When Dovescry turned in a giant performance en route to pulling off the upset in the rich affair for trotting mares...read on

Reflect With Me Takes Shady Daisy

Reflect With Me would not be denied, emerging victorious in a fierce stretch battle with stablemate Lady Lou to capture the $90,525 Shady Daisy for three-year-old pacing fillies to kick off the stakes action on the 2020 Hambletonian Day card of harness racing at The Meadowlands...read on

Our Major Dan set all the speed in the $61,540 Sam McKee Memorial Consolation, but a late-driving longshot named Filibuster Hanover got all the glory thanks to his come-from-behind triumph...read on

The majority of the spotlight on the sophomore trotters during the Hambletonian Day card will fall on the 2020 Hambletonian and Hambletonian Oaks, but a number of three-year-old trotters not in those events were in action on the undercard...read on

Winning races is something that Mission Accepted struggled with on the season coming in Saturday’s $25,000 Vincennes Preferred, but he turned in a blowout score in come-from-behind fashion and in doing so got the monkey off his back...read on

For the results from the Hambletonian Day card of harness racing at The Meadowlands, click the following link: 2020 Hambletonian Card Results

(with files from the Meadowlands)