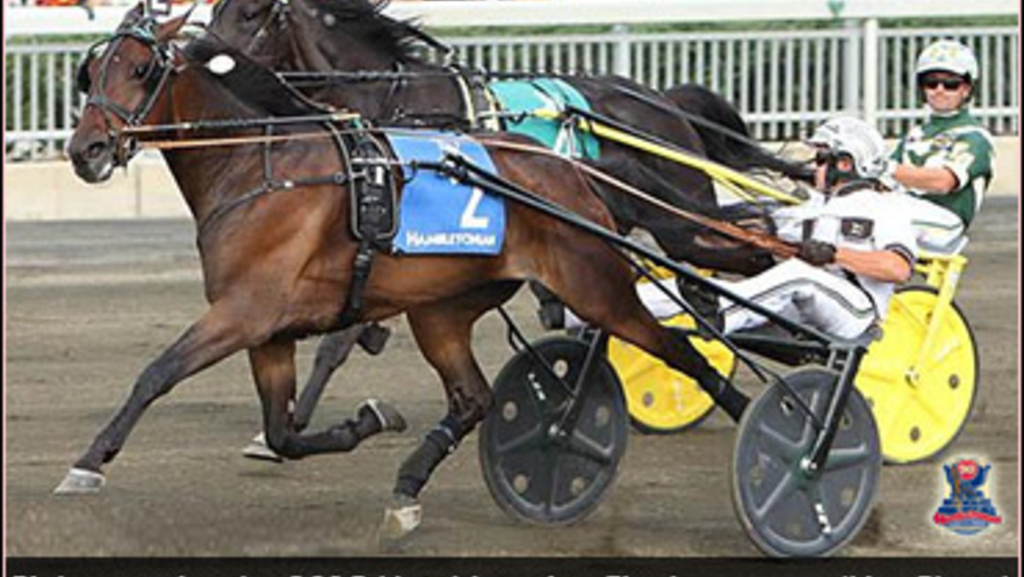 Pinkman picked up driver Brian Sears for the Final after Yannick Gingras chose the other elimination winner -- filly Mission Brief, who was favoured at 3-5 in the $1-million Final. Leaving from post 2, Sears settled Pinkman into third while fellow Takter trainees Uncle Lasse (David Miller) and The Bank (Johnny Takter) vied for early command.

The Bank quarter-pole moved around Uncle Lasse after the :27.1 opening quarter, followed by a move from Sears and Pinkman from third to the lead. The half was reached by Pinkman in :55.2, with Mission Brief gapping the flow in fourth before getting into gear and making the first over bid. Sears asked Pinkman for a bit more step heading into the final turn, causing The Bank to gap and the pocket through a 1:23.2 third panel and giving Mission Brief a chance to pop back to the pylons heading into the stretch.

With Sears urging Pinkman home, Mission Brief stalled in her stretch bid but eventually found another gear to close the gap on the leader. That stretch rally was in vain as Pinkman hit the wire first in 1:51. That mile time lowered his own three-year-old gelding world record over a mile track. Also of note, Pinkman trotted that mile barefoot as trainer Jimmy Takter pulled off all four of his shoes before the Final. 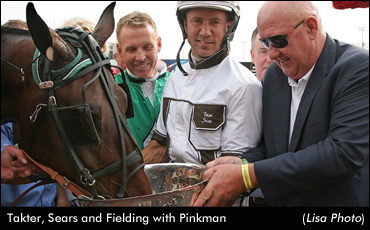 "It's very emotional, Sam, and I just want to thank all the connections that were involved," John Fielding noted after the race. "Brian Sears stepped in and did a great job, and of course my friend and partners Jimmy and Christina Takter have, again, done an amazing job.

"We've been at this for 30 years trying to win this trophy and I'll tell you, this is the greatest thrill you could ever want in this sport and I'm just blown away and very honoured and happy to be in this situation."

Fielding was asked about the driver dilemma that Pinkman faced, and had no concerns whatsoever with ultimate confidence in his connections.

"As always, we leave all these decisions up to Jimmy and he always seems to make the right decisions. We got Brian Sears who everybody knows is a great driver and one of the best there ever was when the money's on the line. I wasn't worried about it at all."

Trainer Jimmy Takter, who won his second straight Hambletonian final after taking the 2014 edition with Trixton, told Sam McKee that he tried to convince driver Yannick Gingras to stay with his horse.

"I understand the situation Yannick was in...my horse is a top horse and I tried to tell him 'I think you're doing a great mistake here, Yannick' and I was right.

"[Pinkman] is just such a fighter and you can do anything you want with him. He's not impressive, maybe but he's impressive in the winner's circle. He gets it done every time."

Driver Brian Sears came into the 2015 Hambletonian with a pair of solid horses but didn't predict winning his third Hambo with a horse he'd never sat behind before.

"I didn't hear much, I heard a little bit from Herb [Liverman], I talked to him a little bit about and I'm just very grateful for the opportunity. What a pleasure the horse was to drive...you're always a little nervous the first time you're driving a horse in a race like that but he was pretty much push button."

Sears also won the Hambletonian in 2009 with Muscle Hill and 2013 with Royalty For Life.

"I was looking forward to making the Final with the couple that I did have and I managed to do that...and then, opportunity knocked. It's just great that they gave me the call."

"It's wonderful, this is my second and my second Hambletonian Oaks but to do it in the same day with geat partners like this, it's wonderful."

Owned by Christina Takter of East Windsor, N.J., John And Jim Fielding of Scarborough, Ont., Joyce McClelland of Zanesville, Ohio and Herb Liverman of Miami Beach, Fl., Pinkman boasts an impressive 17-14-2-0 lifetime summary with $1,766,800 in lifetime purses with the two wins on the day. 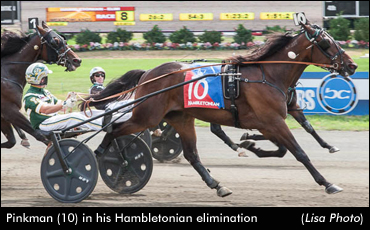 Jimmy Takter trainees claimed the top two spots in the first elimination of the Hambletonian as Pinkman edged out stablemate The Bank to win in a track record-setting and world record-equaling clocking of 1:51.2.

The three-year-old gelded son of Explosive Matter-Margie Seelster blasted from Post 10 for driver Yannick Gingras, who was parked by Donatomite (Trond Smedshammer) in :26.2. Pinkman muscled his way to the lead before coming under attack from stablemate The Bank (Johnny Takter). That foe led through middle splits of :54.3 and 1:23.2, but he couldn’t fend off Pinkman in the closing strides. Pinkman, who defeated The Bank, Donatomite, Habitat and Jacksons Minion in the first elim, will now go into a draw for Posts 1 thru 5 in the Hambletonian Final.

Christina Takter, John And Jim Fielding, Joyce McClelland and Herb Liverman share ownership on the 13-time winner who now boasts a 7-1-0 record from eight trips to the track this season. He’s banked in excess of $670,000 this season and more than $1.2 million to date. 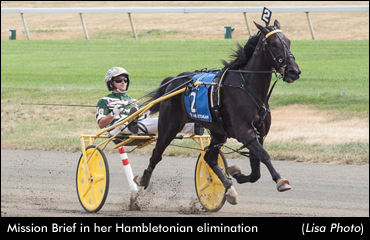 Mission Brief made the decision for driver Yannick Gingras more difficult as the filly seeking to become the 14th in harness racing history to win the Hambletonian easily won her elimination in 1:51.3.

Gingras timed the gate perfectly with her as she was eased into her race and settled into fifth. Uncle Lasse (David Miller) left stoutly for position along with Wings Of Royalty (Brian Sears) and Aldebaran Eagle (Corey Callahan).

French Laundry (Brett Miller) was parked and not content to sit, driving onto the front and clearing past the :26.3 first quarter. Mission Brief was on his back and was in command before the :54.2 half. The filly had no first-up challengers as no one was able to get to her wheel through a 1:23 third quarter and a five-length win margin over Aldebaran Eagle and French Laundry. Uncle Lasse and Wings Of Royalty also qualified for the final.

"The back is her only issue now, she can sit behind horses and her behaviour is awesome," trainer Ron Burke said after the win. "I always look for things that maybe weren't perfect but she was strong, she finished under wraps and we head onto the next heat."

"Around the first turn she got a little crowded there...she wasn't anxious, I was," noted Gingras. "There were a lot of horses there and she's not used to that but she handled it like a professional."

After the draw, Gingras chose Mission Brief in the Hambletonian Final. That gave the drive on Pinkman to Brian Sears. Habitat picks up Matt Kakaley and Wings Of Royalty will be driven by Tim Tetrick.

Congratulations to everyone. Great race.

What a amazing race. The look

What a amazing race. The look on Yannick's face in the picture is one of joy for the horse and owners you can just tell. I can see why he would take the filly to drive. To have the chance to win the hambo with a filly, you would have to be crazy not to give it a shot. She definitely gave a good showing of herself. Congrats to all the owners to all the finalists.

Good for you Herb Liverman, a

Good for you Herb Liverman, a deserving person.