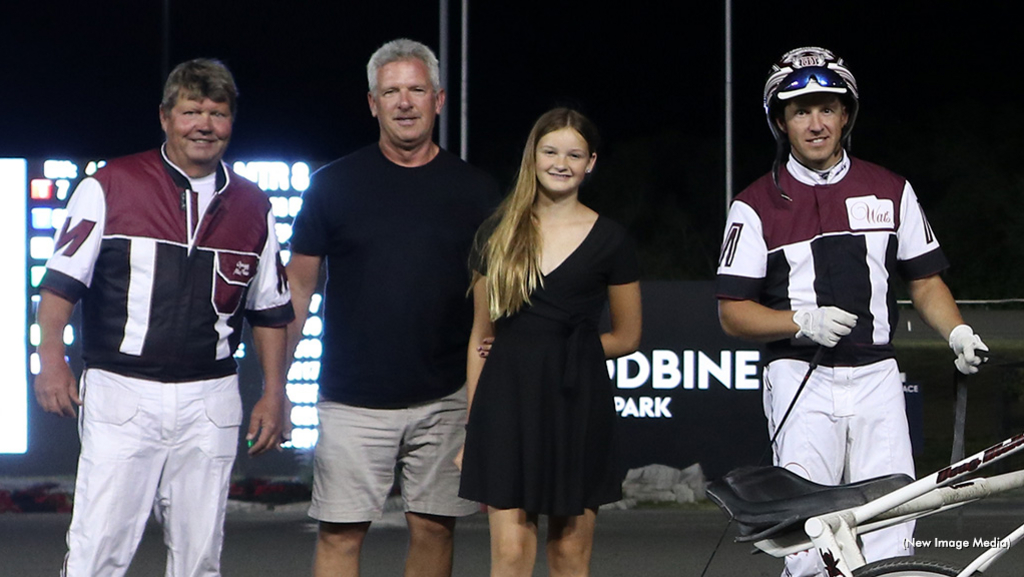 The glamour boys were at Georgian Downs tonight for a pair of Ontario Sires Stakes Gold divisions, and the father-son duo of Gregg and Doug McNair was victorious in each.

Sport Secret started the night off earning his first stakes victory in the $102,200 division in Race 1.

Doug settled the Sportswriter colt off a brisk early pace set by the dueling trio of St Lads Sterling, Southside Eddy and Magical Arthur, who led the field through a first quarter of :26 as they battled for position.

“They mixed her up big time on the front end, and he benefitted from that,” said Gregg.

Southside Eddy, the betting favourite, emerged to take the lead at the half in :54, but was overtaken by St Lads Sterling as he powered to a three-quarter time of 1:22.

As the field entered the stretch, Sport Secret found racing room and closed from third with a final panel of :28.1 to win by a length over a late-charging Century Inspector and Ron.

Making his third OSS start, the third time was the charm for Sport Secret getting a quality trip.

“We’ve only raced him in two stakes races and last Gold he got parked the whole way,” said Gregg. “Then the start before that he was first over, and it was tough for him, but he raced good tonight.”

The win was Sport Secret’s sixth of 2022, pushing him over $175,000 in earnings for Gregg and his ownership partners Frank Brundle (East Garafraxa, Ont.), Jeffrey Skinner (Hammonds Plains, N.S.), and Ross Holmes (London, Ont.).

Century Inspector made a valiant effort to finish second, after going off at 53-1. Bob McClure was in the race bike for trainer John Pentland. Eric Rosene from Bolton, Ont., owns the Hes Watching colt, who now has over $180,000 in career earnings.

Ron flew down the lane to finish third in a photo. It was the James Dean trainee’s second straight top-three finish at the Gold level. Phil Hudon was driving as the colt passed the $200,000 mark for owners James and Wilma Mackenzie.

In Race 3, the second $101,300 OSS Gold division, Stonebridge Helios picked up his third consecutive win since transferring to the McNair barn.

The Sunshine Beach colt was impressive from start to finish. Sent at 1-9 from post four, he settled off the :26.4 first quarter and made a powerful first-up move as the field passed the grandstand for the first time, going from fourth to the front, and leading the rest of the way to win by two lengths.

“He seems to be getting stronger every start,” said Gregg. “He went a nice mile last week at Mohawk, and tonight was a big trip, doing quite a bit of the work and leading them through the half in :54. It was a good mile for him.”

Shawn Steacy trainee Macho Phil was second. Bob McClure was in the race bike as the colt was second for most of the mile and was unable to catch Stonebridge Helios tonight. Hudson Standrdbrd Stb Inc. (Hudson, Que.) owns the son of Shanghai Phil.

(With files from Ontario Sires Stakes)