A snap move by driver Scott Zeron early in the mile proved to be the difference maker for Catch The Fire, who posted a mild upset over heavily favoured Nicholas Beach in the first and fastest division of the Sam McKee Memorial. 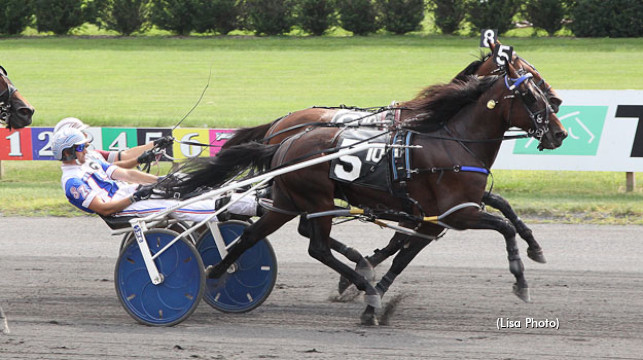 Zeron got away second behind Backstreet Shadow in the early stages of the mile, but he quickly decided to hustle his charge past the leader just as the field made its way to the quarter pole. The first panel flashed up in :26 compliments of Backstreet Shadow and the parked out Catch The Fire. Catch The Fire then cleared, and came under immediate pressure from Nicholas Beach.

The favourite then sped through middle fractions of :53.2 and 1:20.3 before coming under siege from the pocket-popping Catch The Fire. The two pacers staged a bare-knuckle brawl down the lane with Catch The Fire gaining the upper hand in the closing strides. He edged out Nicholas Beach and posted the win in 1:47.2. Third prize was earned by Backstreet Shadow.

Todd Luther trains the four-year-old son of Captaintreacherous-Dream Outloud for Black Magic Racing LLC of Blacklick, OH. The pacer, who also covered 87 mares in the breeding shed this year, has manufactured a 6-1-1 record from nine trips postward this season. His 14 lifetime victories have helped him stash away earnings in excess of $620,000.

Todd McCarthy had inklings of making an early move with Allywag Hanover in his $158,500 Sam McKee division, but he thought better of it. That discretion was the better part of valour, and it landed him in the winner's circle. 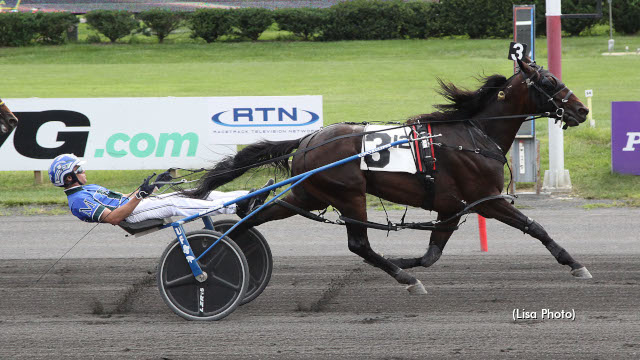 This Is The Plan (Yannick Gingras) left stoutly along with Allywag Hanover and favoured Cattlewash (David Miller). This Is The Plan fronted that trio through a :26.2 opening quarter, and McCarthy thought about looping to the lead but then held back. Cattlewash had no intention of sitting third and popped out of the three hole to front the field of nine at the half in :53.4.

The first to call was Shake That House (Andy McCarthy) with Captain Barbossa (Dexter Dunn) second over heading to the third station. There was a gap in the cover between second-over Captain Barbossa and third-over Western Joe (Scott Zeron) and that space allowed Allywag Hanover to shift into the outer flow turning for home after a 1:21.2 third quarter. When shown racetrack, Allywag Hanover paced with authority and breezed by his rivals to win handily in 1:48. Western Joe found his gear late to close well for second with This Is The Plan staying for third.

"I kind of had it in my head that I would have like to sit the two hole behind Cattlewash and take the chance to shake loose late but when I went to move Yannick kind of sat up a little and I thought I was going to have to do a little bit more to be one spot closer. I just thought I'd take my chances and sit the three hole and hope it panned out."

Allywag Hanover (Captaintreacherous - Anderosa Hanover) is trained by Brett Pelling for Allywag Stable of Wellsville, Penn. The four-year-old gelding now sports five wins this season and 12 lifetime, with earnings of $566,615 in his career.

The Sam McKee Memorial is part of a stakes-packed card of harness racing on Hambletonian Day. Be sure to check out the 2021 Hambletonian Day News Centre for recaps and replays of all the action.