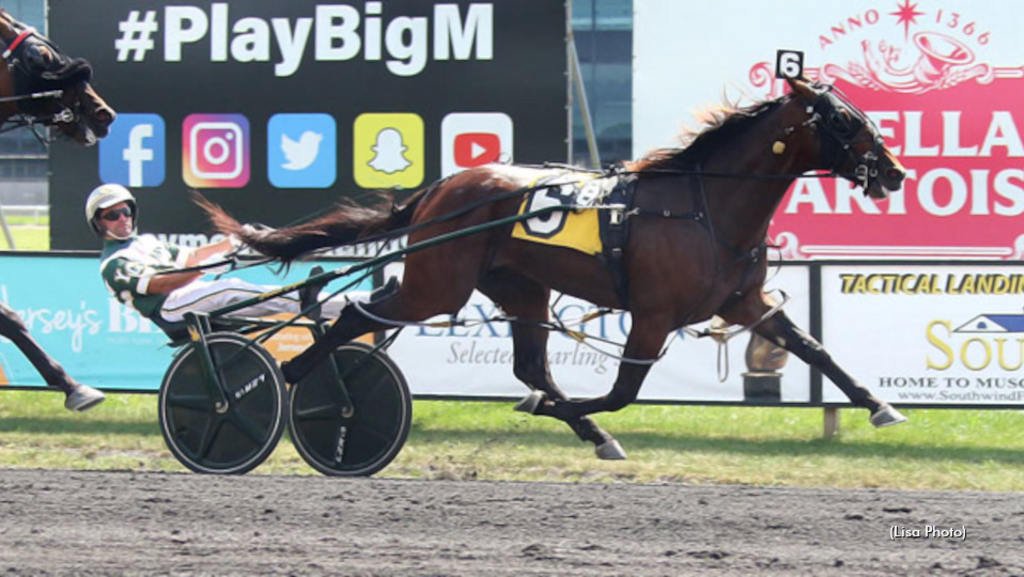 Canadian star Beach Glass claimed the second jewel of the Pacing Triple Crown, the $258,300 Cane Pace for three-year-old colts and geldings, on Hambletonian Day at The Meadowlands.

Returning to the scene of his coveted Meadowlands Pace triumph from three weeks ago, Beach Glass was the 2-5 favourite and didn't disappoint his backers, holding off his main threat Mad Max Hanover for the 1:49 victory for trainer Brent MacGrath and the Schooner II Stable of Truro, N.S.

Coming off a runner-up finish in last Saturday's Adios, driver Yannick Gingras settled the celebrated son of Somebeachsomewhere off the pace while his rivals scrambled for early position.  Mad Max Hanover (Tim Tetrick), the 8-5 second choice and Meadowlands Pace runner-up, touched down on top briefly before Fourever Boy (Mike Wilder) took over, with Night Hawk (David Miller) in pursuit from the outermost post eight through a :27.2 first quarter.

Night Hawk cleared to command but his lead was short-lived as Mad Max Hanover removed to the front. Gingras then made the winning move with Beach Glass, rushing up alongside that rival from fifth and taking charge as they raced past the half in :54.3.

Beach Glass continued to lead to three-quarters in 1:22 with Fourever Boy going first-up after the leader. However, the favourite turned for home with a two-length lead and withstood the pocket-popping challenge from Mad Max Hanover in deep stretch to win by half a length. Night Hawk rounded out the top three finishers.

"I really didn't want to have him on the front, I was trying to get away like fourth or fifth but, you know, :27.2 first quarter, it was going to be :55 and change half probably so I had to make a move and make things happen."

Beach Glass, who has finished top two in all eight of his sophomore starts, paid $2.80 to win. He now boasts five wins this year and eight victories lifetime with $844,900 in earnings from 13 starts.

"It was five tough weeks, and they didn't give him anything," stated MacGrath. "I'm very happy. He does need a week off. I thought about the going to the Milstein and actually told [Northfield Park] I was planning on it but I'm not going. He needs a week and I want to Pocono with him.

"Next will be the the Max Hempt and then a few weeks off and we'll go into the Simcoe and then on to Lexington."

The winner of the first leg of the Triple Crown, Messenger Stakes champion Pleaseletmeknow, was not eligible to the Cane Pace.