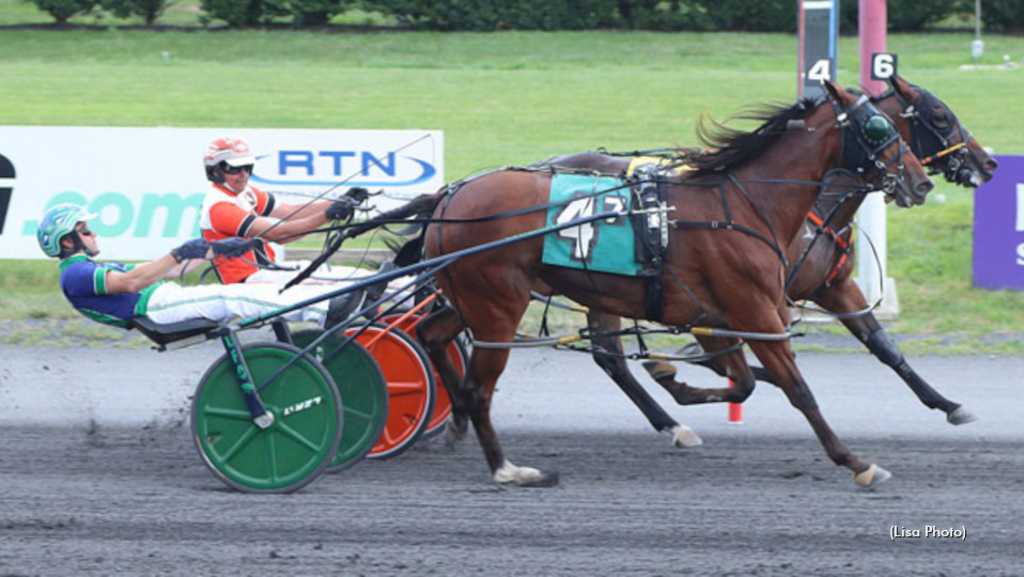 Max Contract and driver Andy Miller were forced to survive a Judges’ inquiry en route to capturing the $92,300 Shady Daisy, which looked a bit like a demolition derby in deep stretch.

With Andy Miller aboard, Max Contract was hustled off the gate and battled with longshot Sweet Treasure to the quarter pole in :26.1 before the favourite brushed to the top.  The parked out Boudoir Hanover then muscled her way to the lead after parking around the first turn, and once she cleared she went on to post middle fractions of :53.2 and 1:21.3.

Gotthegreenlight applied first-over pressure on the leader around the final turn before tiring, and that left Max Contract desperately looking for room in the lane.  Miller tried pushing his way out of the pocket, and after briefly trading paint with Gotthegreenlight it was Max Contract who then appeared to hit that foe’s wheel with her right hind leg.

Miller then dropped his charge inside of the leader Boudoir Hanover, just as Smuggle Tina did at the pylons.  Max Contract accelerated through an opening in deep stretch and managed to out-sprint a rallying Sweet Treasure to the line for the 1:49.3 decision.  Sweet Treasure was a lapped-on runner-up, with third prize going to Treacherous Dragon.

"I thought I was in a great spot and then Todd's filly kind of come up empty and I was searching for room," said driver Andy Miller. "Unfortunately she got slowed down there turning for home but once she got clearance she took off again. She's pretty versatile, I think."

The three-year-old daughter of Huntsville-Big Mcdeal extended her winning streak to four-in-a-row for the partnership of Steve Heimbecker, Andy Miller Stable Inc and Jean Goehlen.  It was the sixth career tally for the Julie Miller trainee who increased her lifetime earnings to $164,750 with the victory.

"I have to give a lot of credit to my owners, Jean and Steve," said Julie.  "They believed in me when I told them I think this filly could be special at three, and they let me prove it to them."