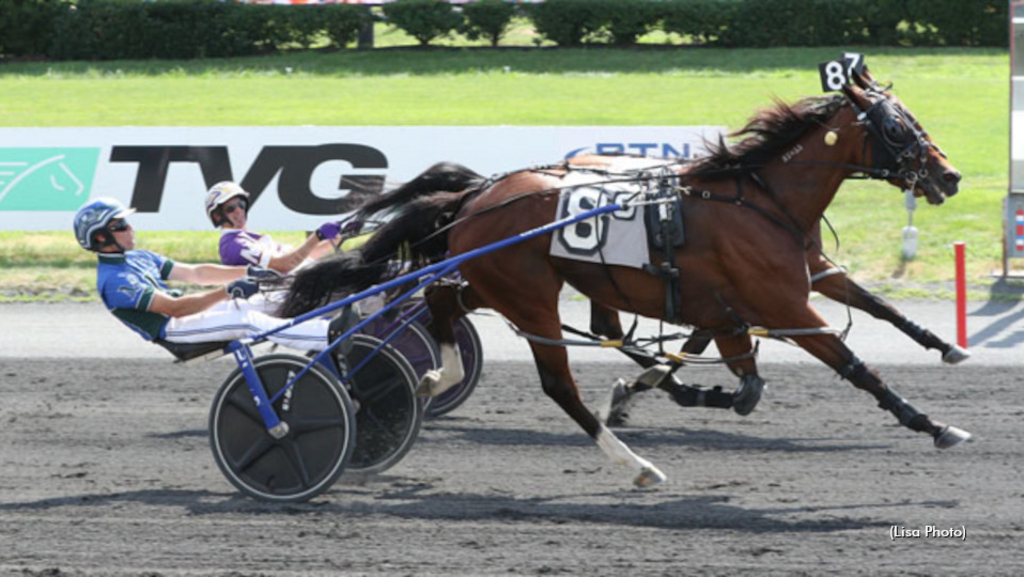 All eyes – and the majority of the public’s win pool dollars – were on Test Of Faith in the $173,000 Lady Liberty Final, and at one point in deep stretch it looked as though the award-winning mare was going to come through for her army of backers.

But in the closing strides a late-rushing Kobes Gigi sprouted wings and stormed home to nail Test Of Faith right on the line in what was the biggest upset of the afternoon.

Kobes Gigi was forwardly-placed early from Post 8 by driver Todd McCarthy, and together they stalked the battling tandem of Racine Bell and Mikala through an opening quarter clocked in :26.1.  Mikala cleared to the lead and went on to post middle splits of :54 and 1:21.3.

Blue Diamond Eyes attacked the leader from first over around the final turn with Test Of Faith tracking her cover from second over.  Test Of Faith catapulted off cover in the lane and appeared to be well on her way to the win, but McCarthy angled Kobes Gigi off the rail in deep stretch and found her a clear path on the outside of the track.  She went into sprint mode and managed to haul down Test Of Faith right at the finish line en route to halting the teletimer in 1:48.3.  Test Of Faith was next best at odds of 1-5, with Amazing Dream N taking home third prize.

"That wasn't really my initial plan but she felt good on the gate and it looked like I was going to be able to step out of there pretty good and she finished up really well," said McCarthy. "Her lines show good time there so she showed it today.

"She raced pretty keen throughout, I was kind of worried it was going to toll on her down the stretch there but it didn't bother her too much. I had to wrestle her out when she got out and clear, and she went right on."

Richard ‘Nifty’ trains the four-year-old daughter of JK Endofanera-Twin Oaks Tess, who was sent off at odds of 51-1, for owners Leander Schwartz and Black And White Stable.  She’s put together a 3-3-1 record from 10 trips to the track this season.  The 10-time winner pushed her career earnings to $372,670 with the win.