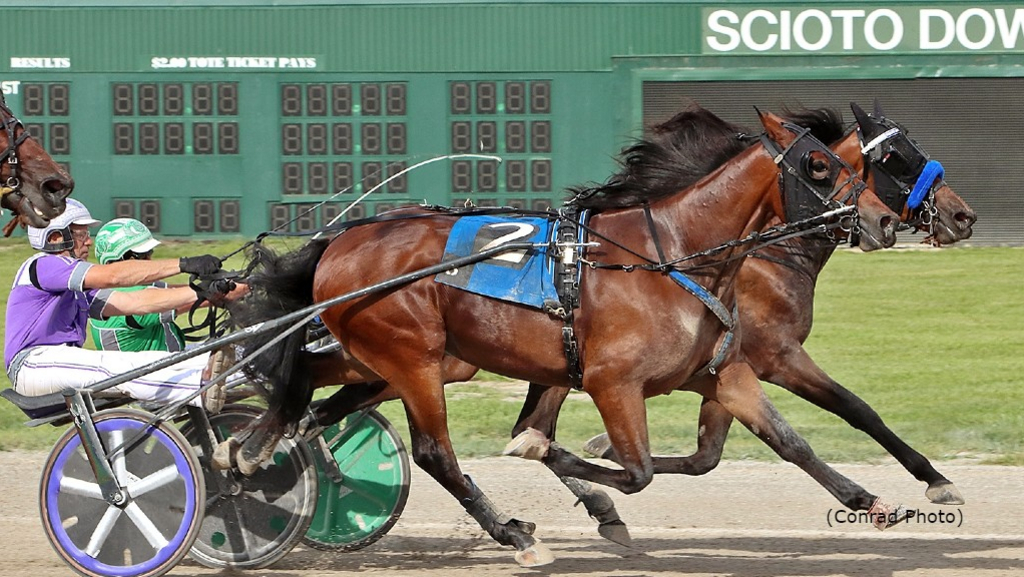 Burton’s Hill (Brett Miller) and Jogging Full Trot (Kurt Sugg) kicked off the first $46,000 division for two-year-old colt trotters in a deadheat fashion. Burton’s Hill, the 6-5 favourite, got away third off the gate. The What The Hill gelding found himself first up on the backside, but never faulted. On the other hand, Jogging Full Trot raced from the back of the pack as the longest shot on the board. The 20-1 gelded son of Full Count was still buried in the final turn but surged through the Lightening Lane. Burton’s Hill and Jogging Full Trot came to the wire together in 1:58.1. Remi’s Rolls Royce (Tyler Smith) was third.

Burton’s Hill is conditioned by Virgil Morgan Jr. for Joyce McClelland. Trained by Miles Wollam, Jogging Full Trot is co-owned by Julie Ann and Dale Sweet as well as Martin Wollam. It was both colts’ first victory.

The next division of colt trotters went to Black Magic (Chris Lems) in 1:57.2. Leaving from Post 5, the son of Full Count went straight to the front to set fractions in :28.4, :59.1, and 1:28.1. Never receiving much pressure, Black Magic bested Great Career (Ronnie Wrenn Jr.) in second while Grand Revival (Dan Noble) completed the trifecta.

A Real Legend (Don Irvine Jr) rounded out the final two-year-old colt trot division in 1:56.1. The gelded son of Uncle Peter was conservative off the gate but didn’t sit long. From fifth off the rail, A Real Legend kicked it into gear just after the :29 opening quarter. For the remainder of the mile, the gelding battled 4-5 favorite John Dutton for control. Once the stretch opened way, there was no looking back as A Real Legend crossed the finish in a new lifetime mark. Rumble Strips (Kayne Kauffman) was second with John Dutton (Tony Hall) in third.

The Rosy Weaver trained and owned trotter has found his groove in the last two starts. Now with back-to-back wins, A Real Legend has $47,800 in career earnings.

The first $63,000 division of the Ohio State Fair Stakes for three-year-old filly pacers went to Coastal (Hall) in 1:51.1. After getting away third, the daughter of Downbytheseaide sat patiently through the half. Her winning move came on the backside as she pulled to challenge the leader. Once she cleared the front, there was no hesitation. Coastal tripped the wire first and established a new lifetime mark. Twenty (Wrenn Jr.) railed for second while Allnight Micki (Aaron Merriman) finished third.

In the final division of sophomore filly pacers, defending 2021 Ohio Triple Crown winner Sea Silk made the first step to repeating the feat in 2022. Leaving from Post 1, the Downbytheseaside filly got away third but decided following wasn’t her style. Merriman quickly pulled the filly to gain control of the field. Unchallenged for the remainder of the mile, Sea Silk stopped the clock in 1:50.3. Stablemate Cape Cod Hanover (Wrenn Jr.) was second and Bittrsweetsymphony (Smith) finished third.

Sea Silk has bankrolled more than $700,000 in her racing career. In six seasonal starts, she has tallied four wins and one third-place finish. Ron Burke trains and co-owns alongside Weaver Bruscemi, Knox Services, and Hatfield Stables.

Criquette Hall (Wrenn Jr.) opened the first $62,500 division for three-year-old trotting fillies in 1:54.4. The daughter of Cash Hall found herself three-wide in the first turn. Determined to clear the front, Criquette Hall pressed onward and finally gained control at the half. Kirsi Dream (Lems) applied pressure on the backside but was no match for the 1-9 favorite. In a new lifetime mark, Criquette Hall held off Kirsi Dream in second with Toes In The Water (Ryan Stahl) finishing third.

Gabbys C Note (Merriman) established a new lifetime mark of 1:54.3 in the final division of the Ohio State Fair Stakes. After patiently sitting third on the rail, the sophomore trotting filly found her opportunity to pull first up on the backside. The daughter of Triumphant Caviar easily made her move to the front. At 1-2, Gabbys C Note cruised across the finish with Favorite Aunt (Hall) coming in second and Alana Hill (Miller) in third.