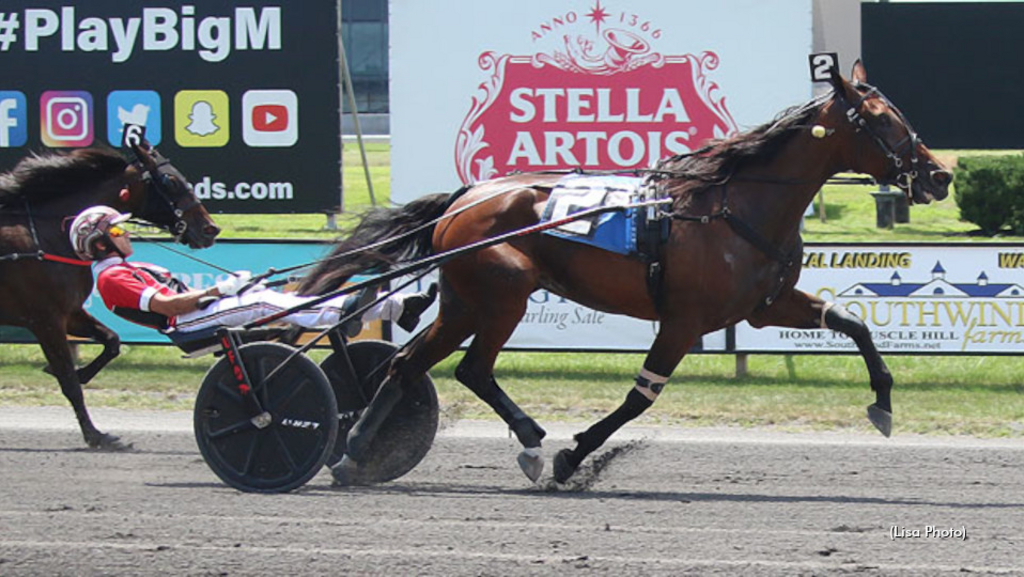 Vaulting off cover in the stretch, Bella Bellini was just peachy delivering as the 4/5 choice in the $145,000 Dr. John R. Steele Memorial Trot on Saturday (August 6) as part of the 2022 Hambletonian Day card at The Meadowlands.

Driver Dexter Dunn settled Bella Bellini ($4.20) into fifth early as Atlanta (Yannick Gingras) used her inside starting spot to cut the corner early and control the tempo. The opening quarter was sharp, clocked in :26 as When Dovescry (David Miller) continued to grind first up down the backside in attempt to take control from her accomplished rival.

When Dovescry did land on the lead just before the :53.3 half, and those serious fractions were just exactly what Dunn hoped to see up front. He tipped Bella Bellini out from fifth to advance, and Gingras also made a move out of the pocket with Atlanta to protect position as the talented trotters hit the third station in 1:22.1. Turning for home, Atlanta looked to be stronger than When Dovescry but Bella Bellini was bullish off that tow around the far turn. When Dunn tipped her off the helmet, she responded willingly and sailed by her rivals under a hand drive to win by two in a lifetime best and stakes record 1:49.4. When Dovescry battled valiantly for the place spot over Atlanta.

"Going down the back I had a bit of a smile on my face," Dunn admitted in the post-race interview. "She was so sharp post parading today, I knew she really had her A-Game on. Once those fractions set up for her, she's so fast at the end of a mile."

Bella Bellini (Bar Hopping - Bella Dolce) is trained by Richard 'Nifty' Norman for breeder - owner David McDuffee. The four-year-old lifted her seasonal summary to 6-2-3 in 11 starts. The winner's share of the purse puts her bankroll over the $1.65 million mark.

Her mile time shaved one-fifth off the former record set by Manchego in 2019.

"I never thought I'd have a trotter under 1:50, that's unbelievable," said McDuffee. "She's doing a hell of a job for us."