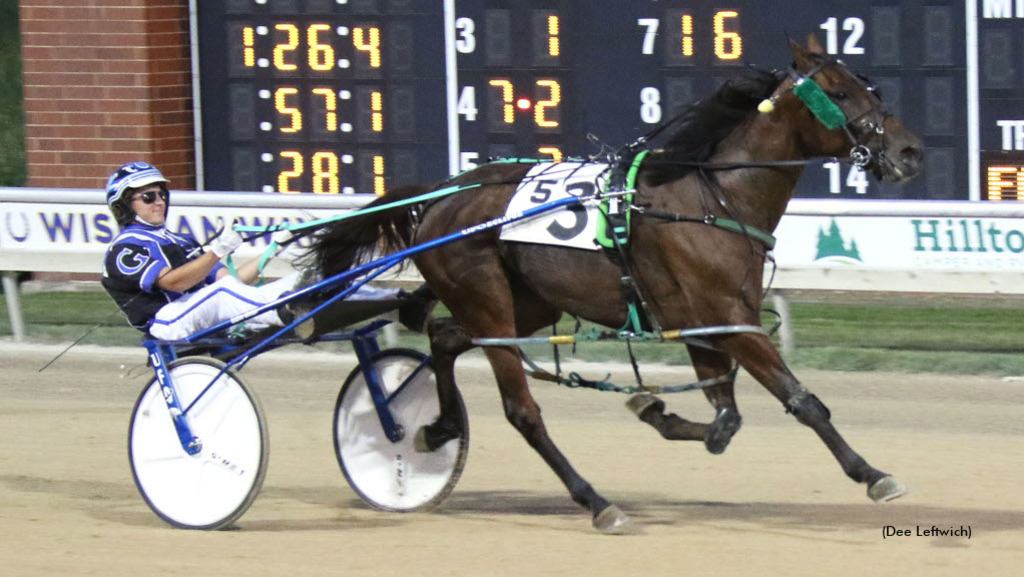 Nineteen-year-old driver James Gould picked up his first career pari-mutuel win on Thursday (August 4) when he piloted Big Rusty to a career best effort in 1:56.1 to capture the $13,200 Minnesota-sired sophomore 'B' pace at Running Aces.

Gould settled his charge away in fourth position from post three while Park With Me Nancy (Brady Jenson) and Rosco P Coletrain (Mooney Svendsen) went to the front and Miss Beach Pearl (Chip Lackey) got away third.

The early fractions of :28.1 and :57.1 were solid for the group and Gould pulled Big Rusty to the outside as they rounded for the backstretch and was able to successfully flush out cover from Rosco P Coletrain, and they were in a perfect striking position as they circled the far turn.

At the top of the lane, Gould and Big Rusty were looming large and they ripped off the cover and roared down the centre of the track to take the lead and draw away handily by four lengths, with Rosco P Coletrain holding second and Datsyukian Deke closing for third.

The winner is a son of The Village Rusty, who now has two wins in nine starts this season for owner Aimes Racing and trainer Elvin Zimmerman.

Gould found the winner's circle in just his sixth career pari-mutuel drive, having just gotten his provisional license earlier this month.  The young reinsman hails from Humboldt, Iowa and has been driving in races at the Iowa fairs since the age of 16. Prior to his big win at Running Aces on Thursday, he had registered 22 career wins at the fairs.

Lovin On You (Jenson) rallied from last to be runner-up for the second straight week, while Kitty Wampus (Svendsen) completed the trifecta.

The winner is now 7-for-7 this season, with earnings of $64,350 for owner/breeder Kati Sokolowski. The impressive son of Easy Again is trained by Maria Alvarez from the Williams Hernandez stable.

Fillister Photo and driver Chad Svendsen captured the $16,500 freshman filly pace with a dominating 9-3/4 length tally in 1:57.2 for a new career mark.

Svendsen took control of the affair early and then proceeded to widen the lead at every call. Justpoppinpickles (Lackey) held off Stevies Girl (Mooney Svendsen) for the place spot.

Driver Mooney Svendsen settled the sharp son of Wind Me Up into the second position early before going after pace-setter Polar Storm (Lackey) and taking control as they headed into the final turn. Once on top, Im A Skoldier ($2.40) drew away from his rivals.

The winner is owned by his breeder Van Otterloo Stables and is trained by Robert Lems.

Live Racing returns to Running Aces on Sunday (August 7) for Pepsi Family Night and will feature two elimination splits for the 2022 Ron Banks Memorial Pace for Fillies and Mares.