Things Get 'Western' In McKee Memorial

Western Joe starred in the Preferred ranks over the winter at The Meadowlands, but on Hambletonian Day the four-year-old found his way to the Big M winner's circle against the sport's best older pacers. 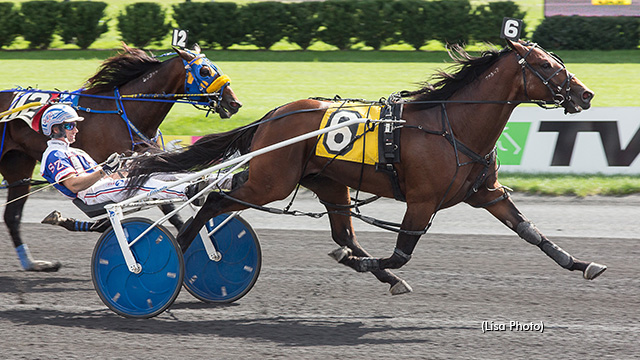 Filibuster Hanover made the front in :26.1 with Western Joe in the pocket. All Bets Off (Matt Kakaley) would emerge from fourth in front of an advancing Miso Fast (Tim Tetrick) and pressure first over before clearing at the :54.4 half-mile point, feeling the heat of Miso Fast to his outside with McWicked third over. The field would buzz through the third station in 1:21, sending Sears three-wide with McWicked. Looping around Miso Fast, McWicked made the lead with a 1:48.2 mile. The fading Miso Fast gave daylight to Western Joe, who was angled into the four path for Zeron loaded with pace. Western Joe's brush was enough to best McWicked by a length in a time of 2:02 for the 1-1/8 mile event. Filibuster Hanover completed the triactor.

"He’s a tough one," said Zeron after the win. "He’s the type of horse that you just always leave for position and just stay in. I don’t think re-moving would’ve been the right option. And at the time sitting third on the rail with that kind of speed we were going up the back side and around the last turn, it was perfect. He runs out a little bit so when I was able to just feed him racetrack to the outside I knew he was gonna get up."

Bred and owned by Anthony Ruggeri of Mamaroneck, N.Y., who co-owns with Richard Tosies, of Hamilton, N.J., Western Joe (Western Ideal - Ante Fay) has nine wins in 22 starts as a four-year-old, with eight of those wins coming at The Meadowlands. The win pushes the stallion's lifetime bankroll to $469,673.