After an O’Brien Award-winning season as a freshman thanks to a number of top tier efforts in big money performances, Stay Hungry seemed to struggle to find his way back to the top of the mountain in 2018. That all changed in the Cane Pace. 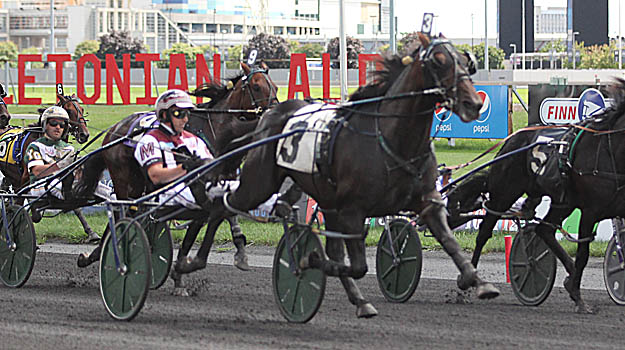 Stay Hungry rallied from last at the head of the lane for driver Doug McNair and came out on top in the rich event, winning in a stakes record-setting clocking of 1:47.3.

The three-year-old son of Somebeachsomewhere-My Little Dragon managed to track Meadowlands Pace winner Courtly Choice while longshot Im A Big Deal tore through wild fractions of :25.3, :53.3 and 1:20.2. The field fanned out wide turning for home, and when McNair hit the accelerator Stay Hungry kicked into overdrive and swept to the lead in deep stretch. Stay Hungry prevailed over Grand Teton and Babes Dig Me. Heavily favoured Courtly Choice settled for fourth.

“He has high, high speed. So if put you him in the right spot and there’s lots of fractions he’s gonna pay something and be real close,” said McNair.

Tony Alagna trains the nine-time winner for owner Brad Grant of Milton, Ontario. The colt now owns a 3-0-3 record this season from eight attempts. The lion’s share of the loot lifted his lifetime earnings to $949,268.

This was McNair’s first career Cane Pace win for McNair and the second for Alagna, who won in 2013 with Captaintreacherous.