Lather Up A Monster In McKee Memorial

The winning streak is now three-in-a-row and counting for the freakishly-fast Lather Up, who crushed the competition in world record-setting fashion in Saturday’s $230,200 Sam McKee Memorial at The Meadowlands. 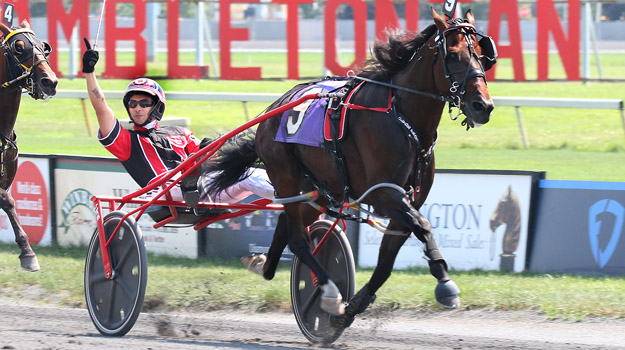 Lather Up cruises to victory in the Sam McKee Memorial at The Meadowlands. (Lisa Photo)

Montrell Teague put the hammer down as soon as the gate sped away, and Lather Up responded by rocketing past the quarter pole in :25.1. From there, the fastest pacer in the history of The Meadowlands slashed his way through fractions of :53, 1:20.1 and 1:46.3 before covering the 1-1/8 mile affair in 1:59.2. This Is The Plan, who sat the pocket throughout, was a well-beaten second. Mcwicked, after a first-over journey, stayed on to finish third.

"I was just hoping to be the last one to front and try to rate the speed as best as I can,: said driver Montrell Teague. "I saw Mcwicked come to my side and I was a little nervous, but right when he straightened up off that last turn, it was just like he was starting to leave out of the gate again. He's unbelievable.

"He couldn't have done it any easier -- :49.4 and I never popped the earplugs," Teague added. "I hit him maybe twice, maybe tapped him just to keep him going around the last turn just to make sure he knew what he was doing."

Clyde Francis trains the four-year-old son of Im Gorgeous-Pocket Comb for owners/breeders Gary and Barbara Iles of Harrington, DE. From 10 starts this season, the superstar has manufactured a 7-0-1 record while banking $543,795 along the way. The lifetime earnings on the 22-time winner now stand at $1,646,242.