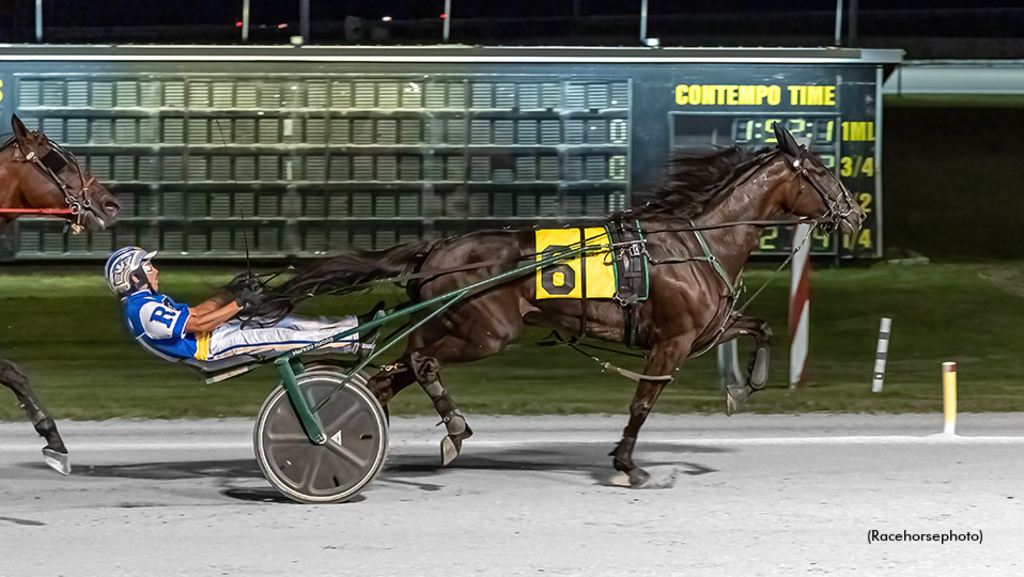 Richard Moreau trainee Fashion Frenzie tucked a worthwhile tightener in his holster heading to the Maple Leaf Trot next week as he lowered the track record at Georgian Downs for aged trotting geldings in taking the oval's signature event, the $100,000 Honourable Earl Rowe Memorial Invitational, on Sunday (Aug. 28).

Driver Louis-Philippe Roy wasted little time to place the 2-5 choice on top to a :27.4 first quarter with Truffles Too sitting the pocket. That pair stayed in line through a :56.4 half and through three-quarters in 1:24.2 while the outer tier struggled with Mycrownmykingdom spinning his wheels uncovered and four lengths from the lead.

Rounding the bottom corner, Roy kept Fashion Frenzie to task as Truffles Too took aim from the pocket, but only gave pursuit to settle for second by 1-1/4 lengths in a 1:52.3 mile. The time bests the previous record for an aged trotting gelding of 1:53.2 first established in 2004 by Abbey Road C and later matched in 2021 by Arrakis. Combs Hanover finished third and Gold Edition took fourth.

For Fashion Frenzie, the Rowe victory gave him five straight wins from five tries in 2022 and added to his resume of now 16 victories in 24 attempts. The four-year-old Archangel gelding has accrued $847,685 in purses for owners Ecurie Francis Richard Inc., Mario Bourgea, Pierre Guillemette and Sylvain Richard. He paid $2.40 to win.

The second-place finish by Truffles Too also marked a momentous occasion for longtime Ontario conditioner Bill Budd, who crossed the $20-million plateau with the $25,000 prize share. Budd, who has trained horses for around three decades, has over 2,000 wins to his name from over 10,000 starts and is on track to top his 2021 season, where he earned $248,654 from 120 starts.

A trio of $21,800 Ontario Sires Stakes Grassroots events for three-year-old trotting fillies were contested on the undercard. Socks N Crocs took the first division in a near pillar-to-post 1:55.1 score.

Odds-on choice Resolving pushed for the lead to a :28 first quarter but parked Socks N Crocs all through the turn before yielding to the latter in the stretch first time. The early battled fired up the Gregg McNair pupil, who remained strong on the lead through a :57.3 half and to three-quarters in 1:26.3. She then repelled Resolving's pocket pop in the stretch to win by 1-1/4 lengths with Grace finishing third and Angelonia checking in fourth.

Gregg McNair co-owns Socks N Crocs with M&s Racing Stable Inc., Dean Lockhart and Paul Kidd. She won her second race from 15 starts and has now banked $63,381 in her career. She paid $8.30 to win.

Chocolate Parfait persisted through a first-over bid to take the second Grassroots split in 1:56.1. The Muscle Mass filly race fourth while Halo Its Heaven led to a :28.3 first quarter. Driver Chris Christoforou then got underway with Chocolate Parfait into a :59.2 half and marched forward through three-quarters in 1:27.2 to match strides with Halo Its Heaven. She then overpowered the temposetter coming off the corner and slid clear to a 1-1/4-length win over Rose Run Xcentric. Halo Its Heaven held third with pocket-sitter Muscle Envy fourth.

The last Grassroots division went the way of pocket-popping Hershey Seelster in 1:55.2. Driver Jason Ryan had the Kadabra filly poised behind tempo-setter Silver Diamond through fractions of :28, :57.2 and 1:26.1 before laying siege on the tiring leader. Hershey Seelster grabbed the lead coming for home and dug in to the finish to hold off 2-5 favourite Clockwork Orange by a length. Muscle Up The Gold took third and Classic Magic finished fourth.

Nick Gallucci trains Hershey Seelster for owner Millar Farms. She won her fourth race from 13 starts, has now earned $37,195 and paid $8.50 to win.

Stonebridge Zeus took the single $7,100 Prospect Series division for three-year-old trotting colts and geldings in 1:56.4. The Blake MacIntosh pupil swept from off the speed to win by a head over favourite The Champ Champ and notch the third win in his career from 23 tries. He has earned $53,279 for owners Van Camp Trotting Corp, Mortgage Boys Stable and Blake MacIntosh and paid $5 to win.

The full replay of COSA TV's live coverage of the Earl Rowe Memorial and some of the preceding races is available below: