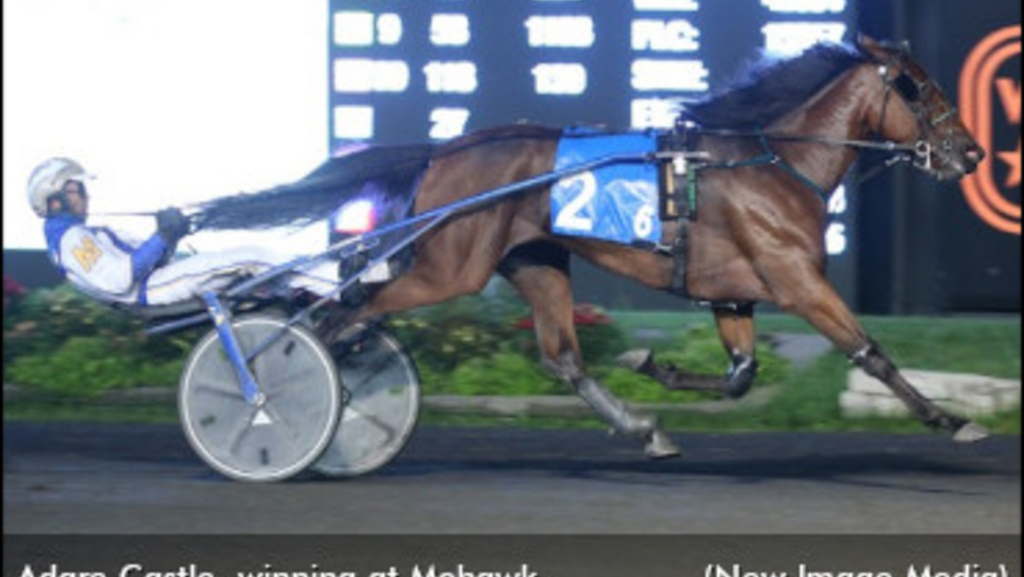 Adare Castle nearly slipped through the fingers of trainer and co-owner Mark Etsell. That filly is part of a stable that is propelling the longtime conditioner and developer to his best year yet, and Etsell is poised to add to those totals in Saturday's 2021 Balanced Image Final at Hanover Raceway.

Etsell is no stranger to stakes success in the province, having campaigned multiple stakes winners including the likes of Ghost Of Sweepall, Tantallon Wonder and Blossom Seelster. But despite the lowest number of starts in any season for the last 30, he's en route to his best single-season earnings total with $364,251 banked as of August 27.

Adare Castle is most certainly the star of the show, but according to Etsell he was only seconds away from not having this story to tell.

"I didn't go to Kentucky because of COVID," Etsell told Trot Insider. "[OSS] Super Finals were in close proximity. So I would have had to quarantine and it just didn't fit into our plan," As a result, Etsell had horseman Walter Whelan bidding on a few yearlings on his behalf at the 2020 Lexington Selected Yearling Sale. "There were a few that we missed out on that I would have been quite happy to have." The decision was made to head to Timonium and ensure quarantine upon return.

As yearling sales go, many people often like the same horses and that was defintely the case at Timonium. Etsell had three Muscle Mass fillies earmarked; the first two he didn't get. Adare Castle was the third, selling as hip 698, and he nearly missed out on her.

"[Adare Castle] was the last of the Muscle Mass fillies I liked. I had scoped her out pretty good, I had scoped her out at home...she didn't have a great video but I don't put a whole lot of faith in videos. I use them as a guideline but that's it. So I looked at her at the sale, and I liked her. She was on a couple of my clients' lists and we had discussed what we were going to go on her."

Etsell gave the filly one last look before she was about to head to the sales ring, then went outside the auction area as to stay physically distant and outdoors as much as possible. After not much time had passed, he was surprised to hear her name as the horse actively being sold.

"I thought 'wow, that filly can't be in the ring already!'"

She was in the ring already.

"I quick ran in and they were at $8,000, so I just threw my hand up really quick. Then all of a sudden they dropped the hammer. I thought 'geez, did I buy the wrong horse? Was I one early or one late, what's going on here?' I looked up, the number's right on the board. They bring the sheet to sign...yeah, it's the right one. I'm thinking 'what just happened? Did I miss something?!'"

Etsell literally followed the filly back to her stall and looked at his new purchase once again, slightly baffled as to how the time had elapsed so quickly. But now, where there was once panic there is a sense of calm. Adare Castle has been flawless thus far in four starts, winning most recently on Thursday (Aug. 26) in her first Grand Circuit assignment — a 1:56.2 score in her Champlain division.

"Everyday is a blessing. She's just so professional. She doesn't get too wound up about anything, like James [MacDonald] said last night, he said 'I thought there was something wrong. I'm going to the half and the lines are just dead in my lap.' Well, that's kind of just how she is. She's better chasing until you kick her into gear; once you kick into gear then hang on, because she's gone. And if you saw us in the winner's circle, she'd stand there all night if you wanted her to.

"She has a paddock buddy, an old gelding there and she just goes out drops her head and eats grass, and an hour and a half later she's at the gate saying 'okay, I want to come in.'"

Etsell emits a positive energy while in the midst of his career year. And that positive energy is happily being shared by his longtime ownership group, including Bob Newton of Walkerton, Graham Hopkins and Peter Porter of Port Dover, Ont.

"We're enjoying it and we appreciate it. I've got a great group of people that own part of this horse and others as well. Bob Newton's been with me since the 80s, Graham Hopkins, we've had horses over the years, we actually had a broodmare together and raised a couple foals. Peter's new, but he's really good. And this year it's kind of special, you know, people can actually get back to the racetrack and enjoy the races and, you know, be in the winner's circle. It's nice. This year, it's been ironic too, Bob's had some health issues that he's dealing with, Graham has a few right now and Peter had a heart attack in the spring. So I think everybody's enjoying this and it's taken a little bit of weight off their shoulders and they're getting to enjoy life and have some fun." 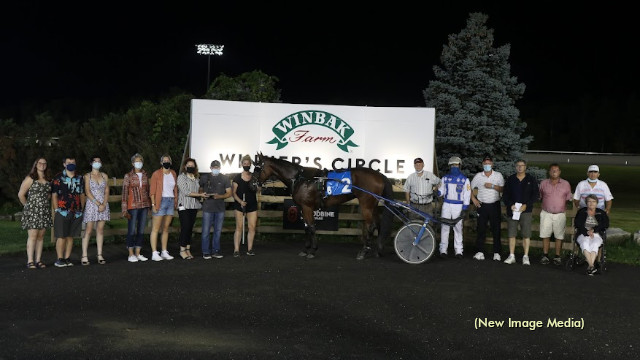 That fun with Adare Castle will be focused in the Halton and Hamilton areas, with no stateside staking due to the uncertainty of travel. Etsell is very content to ship 10 minutes from Rockwood to Woodbine Mohawk Park after years of shipping horses from his former Barrie-area base of operations and long treks up and down Hwy. 400.

But this isn't a story about real estate where the keys to success are location, location and location. Etsell and his team deserve the credit for the success of the stable.

"A lot of hard work by the crew here," noted Etsell. "We're a small stable, we run with maybe 10 [horses] as a low to 20 as a high. There's four of us and everybody works hard.

"The horses are healthy right now and that makes a big difference this time of year. They're peaking at the right time. A horse like Adare, this is why we go to yearling sales, to buy the dream."

It's no surprise that Etsell was looking for Muscle Mass yearlings in his harness racing dreams this past season, given that the stallion tops the charts for provincial earnings on the trotting side and that Etsell himself has had his fair share of success with that pedigree line.

"I've always had a bunch of them. You know, we've had Major Muscle and Mister Muscle...a bunch of different ones, and I think I've just learned over time...they're a very honest breed and I find they're very good-gaited and stay trotting pretty well. But they have certain traits that come from the Muscles Yankee line like conformation and stuff and I think I've just learned how to accept it and and deal with it.

Ironically, he's heading into the 2021 Balanced Image Trot Final on Saturday with an elimination winner sired by Muscle Mass by the name of Sea Can.

Sea Can (Muscle Mass - SOS Respect) is a much different story for Etsell than his three-year-old full brother Blue County who is winless in three starts. Sea Can sports a 1-1-2 summary from six appearances for Etsell, Porter and breeder / co-owner Terry Devos, including his Balanced Image elim win in 1:59.2 last Saturday.

A June foal, Sea Can still has some maturing to do according to Etsell and the addition of trotting hopples about a month ago has definitely helped in that regard.

"He's looking like a really nice horse and I'm hoping that he'll step up as time goes on. That was a good mile for him last week there. I don't want to say it shocked me but I was surprised he went that much." 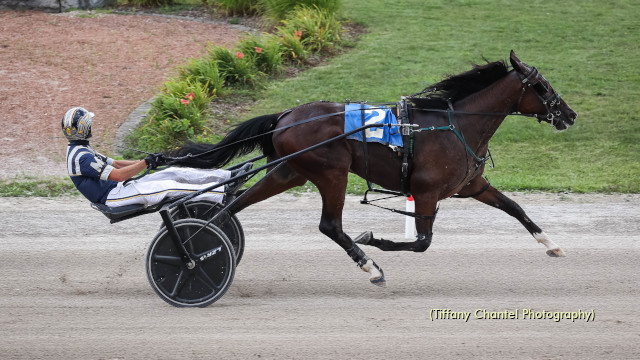 "The weather doesn't sound very nice," said Etsell of his thoughts for Saturday's $44,200 Final, noting that the forecast is calling for five to 10 mm of rain in the Hanover area. "That will change the the whole dimension of that race dramatically right if we get the bad weather. Both horses can leave enough to get spotted it's just, you know, where do you want to be spotted. A lot of speed on the inside, there's a couple one dimensional horses there that, you know, it's going to make it interesting."

The forecast doesn't concern Etsell with respect to how he feels his horses will handle an off surface, but a cooler forecast might help Etsell's other Balanced Image Trot contender, Allisonann Hanover.

"I think Alisonann Hanover, her first start it was a little bit sticky that night and it didn't seem to bother her, she's pretty good-gaited, all she has to do is fill out and grow up a bit more and she'll be good. She has trouble with allergies; a day like today, it would be nicer. When I raced her in Georgian and it was a nice night — not a cool night but not humid — and she responded very well, and then the last two starts at Hanover it's been like 110 degrees there, the allergies got to her and she's not finished as strong as she can. So I'm hoping that a little cooler day for her would be a blessing. But we have to go with whatever the weatherman gives us."

The 2021 Balanced Image Trot Final is slated as the eighth race at Hanover on Saturday.