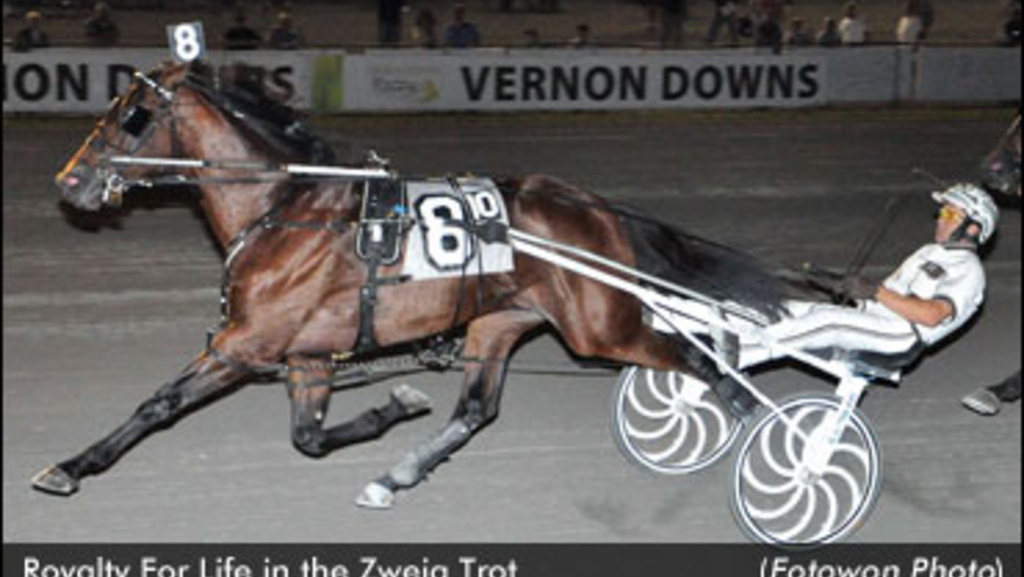 Hambletonian champion Royalty For Life returned to winning form on Sunday evening as he captured the $360,000 Dr. Harry M. Zweig Memorial Trot at Vernon Downs with a 1:53.1 front-stepping effort.

Driver Brian Sears sent hometown hero Royalty For Life to the front of the field from the outside post position and carved out early fractions of :27.1 and :58 with Pine Credit and Corey Callahan advancing right alongside the leader en route to the third quarter mark of 1:26. But Royalty For Life fought back into the stretch and drew clear to score in 1:53.1. Pocket-sitter Corky and David Miller finished one and a half lengths behind in second while Pine Credit held off Aperfectyankee and Jim Oscarsson in a photo for show.

Despite coming off a seventh-place finish in the Colonial Trot at Pocono Downs on Aug. 17, Royalty For Life was the 6-5 co-favourite in the race and paid $4.70 to win.

George Ducharme, who is stabled right in the Vernon backstretch, trains Royalty For Life for breeder Alfred Ross and partners Raymond Campbell and Paul Fontaine. The homebred Rc Royalty-Bourbon N Grits colt has now won five of his nine sophomore starts while banking $874,850 in purses.

Mistery Woman and David Miller rallied home off second over cover and got up in deep stretch to win the companion $150,000 Zweig Filly Trot in a career-best 1:52.1 by one length over entrymate Shared Past, driven by Dave Palone, and Frau Blucher, with Ron Pierce aboard. The Donato Hanover-My Dollys Dream filly, who was three-fifths of a second off the track record set last year by Check Me Out, is trained by Jonas Czeryson for owners Misty Miller, William Donovan, Aldebaran Park Inc. and Millstream Inc.

The $75,000 colt consolation went to the Frank Antonacci-trained Lindys Tru Grit and Tim Tetrick in 1:54.4 while Thistle Dhu nosed out Perfect Alliance and Callahan in 1:54.1 in the $40,000 filly consolation for driver Brett Miller and trainer Del Miller.

The first round of the Tioga/Vernon Drivers' Championship was also held on Sunday evening with Jim Marohn Jr. taking the top spot and $10,000 first prize cheque after accumulating 27 points. Canadian representative Jody Jamieson finished second with 20 points and Tetrick was third with 18. Sears (17), Pierce (10), Yannick Gingras (6), Rick Plano (3), David Miller (2) and Callahan (1) rounded out the leaderboard.

The drivers and their accumulated points will head to Tioga Downs for the second leg of the competition on a special Labour Day card, September 2, with a 1:30 p.m. post time. The overall winner of the event will receive $25,000.