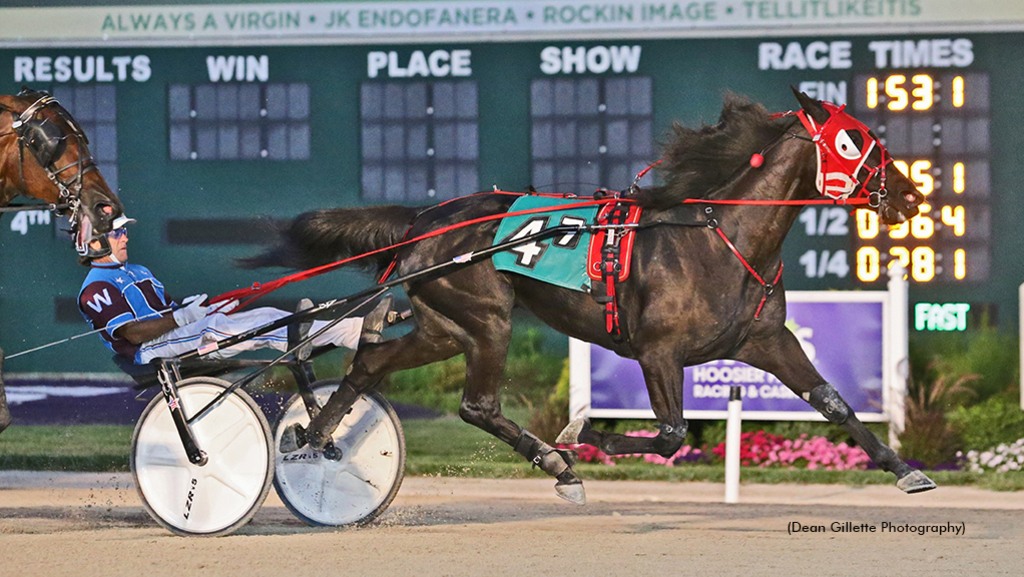 M Ms Dream turned in another dominant performance in the first of two $47,000 Indiana Sires Stakes divisions for three-year-old trotting fillies at Harrah’s Hoosier Park on Wednesday, Aug, 24 to win going away in 1:53.1.

With the victory, M Ms Dream is now undefeated in six starts this season and has won 10 in a row dating back to last September for trainer Henry Graber Jr. and driver Sam Widger.

Leaving from post four, M Ms Dream was unhurried from the gate and settled along the rail in fourth. Swans Eye and driver John DeLong reached the front just past the first quarter in :28.1 and led the field through middle splits of :56.4 and 1:25.1. When the field rounded the final turn, Widger had M Ms Dream on the attack from first-over. Using a :27.4 closing quarter, M Ms Dream was able to track down Swans Eye and hold off a late surge from Fleurie and Michael Oosting up the rail. The 1:53.1 winning time equalled her lifetime mark.

As the heavy betting favourite, M Ms Dream returned $2.20 to her backers at the betting windows.

The daughter of Swan For All-Trading Places has earned $150,000 in six seasonal starts. M Ms Dream has now won 12 of 14 lifetime starts and is owned in partnership by Eleven Star Stable, Hillside Stables and Frank Baldachino. M Ms Dream was bred by Mervin Miller.

In the second division, Bluebird Dove converted a pocket trip into a 1:54.1 score with driver Peter Wrenn in the bike. Using a :26.3 final panel, Bluebird Dove powered home and was able to track down the post time favourites, Jusmakinyalook and Jordan Ross, to get the win by nearly two lengths over Call Me Dani and Trace Tetrick.

Trained by Melanie Wrenn, the daughter of Swan For All-Goosebump Hanover recorded her fifth win of the season from 10 starts. Owned in partnership by David McDuffee and L&L Devisser LLC, Bluebird Dove has now earned $105,256 in lifetime purse earnings. She was bred by Daryl D. Miller.