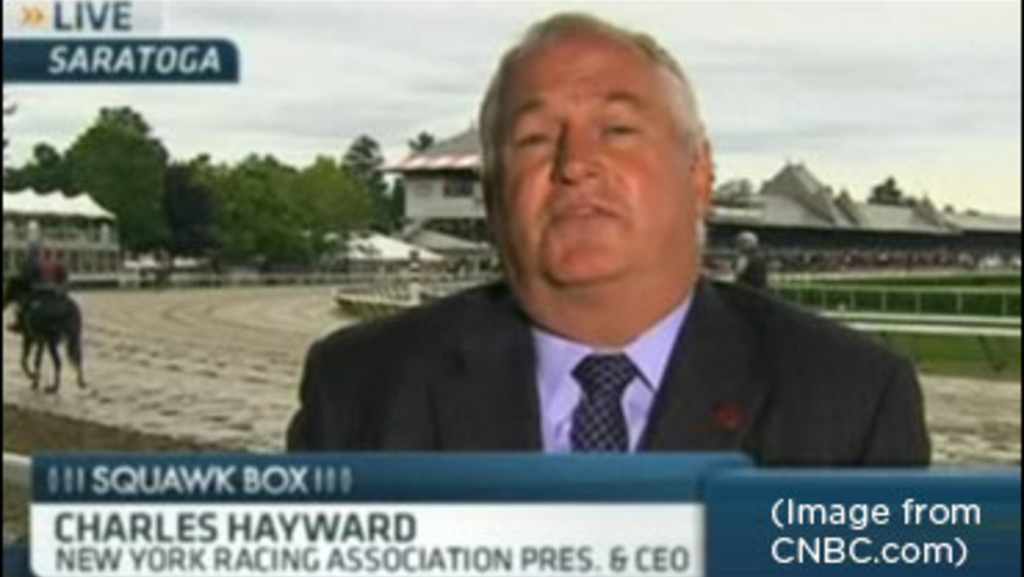 "We're taking too much out of the customer's pocket, and we're not returning enough to them after each race is run."

On Monday, much to the amazement of loyal horse racing punters, New York Racing Association President and CEO Charles Hayward acknowledged on CNBC's 'Squawk Box' morning program that a lowering of track takeout on wagers is needed.

Hayward cited a pair of particular factors during the segment. First he made reference to the increased competition for gaming dollars in the United States of America. "There has been a fairly significant explosion of gaming in this country," explained Hayward, who particularly mentioned the rise of native and non-native, land-based gaming enterprises.

Touching on his second point -- that the current takeout in horse racing is too high and thus uncompetitive with other gaming options -- Hayward said, "The other thing, which is counter-intuitive, is that in 1960 our takeout -- which is the money that we take before we distribute it back to the players -- was 15 per cent. Today it is 19.8 per cent. Table games are two per cent, slots are five per cent, poker is eight per cent, and sports betting is 10 per cent. So the industry, in addition to looking at its racing side, really has to look at the financial side and really make it a better proposition for the customer."

He went on to say that "it sounds a little counter-intuitive, but the more money we put back into the people's hands the more money they will bet back in, so a reduction in takeout would actually be more beneficial for us."

Hayward also commented on the current retraction which is being witnessed across the country in the horse racing industry.

"There is no question that the racing business is going through a decline and a consolidation," he said. "Like any other commodity business, particularly on the breeding and sales side, there are probably far too many horses being bred (which are) not of the right quality. We are seeing significant declines in the breeding side, and I think will mean a consolidated, smaller, but more stable business."

It is great to see another

It is great to see another person in the race game speak up for the horse player. He recognizes that with the current track takeouts the race game is no longer competing with other forms of gambling and the take out must be dramatically reduced. I will correct him on one thing, most people mistakenly believe that single game sports wagering has a house hold of 10% but that is incorrect, it is in fact only 5%

Lets say in the nfl detroit is playing green bay and green bay is -7.5 fav. I bet $110 to win $100 on green bay and someone else wagers $110 to win $100 on detroit.one side wins and the other loses. The house ends up making $10 of a wager of $200 which is 5% These games against the point spread are a 50/50 proposition so even a coin flipper will hit at approx 50%. You will win 1 out of every two bets over the course of time even if you know nothing, or lose 5% of your money. I made this correction to further show just how uncompetitive the race game really is with other forms of gambling.

Finally someone speaking for

Finally someone speaking for the alleged "customer" instead of the owners, trainers !

Yeah, someone gets it!

Yeah, someone gets it!