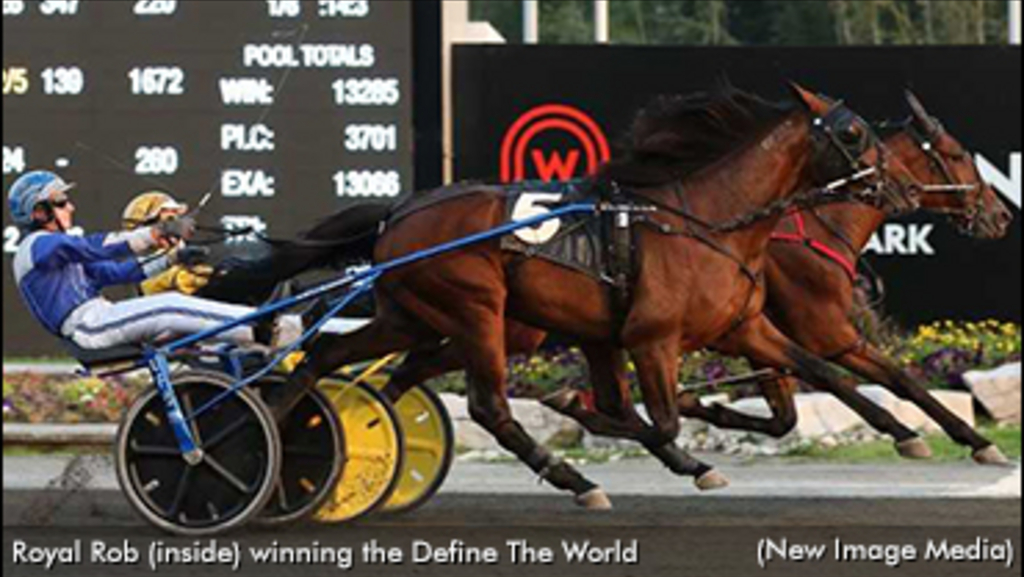 Trevor Henry was the star of the show in the two-year-old trotting series finals at Woodbine Mohawk Park Thursday, Aug. 23 as the Arthur, Ont. resident guided Royal Rob to a narrow victory in the $33,200 Define The World and Sette Deo in the $35,200 Pure Ivory.

Royal Rob went off as the 2/5 favourite in the Define The World Series finale. The Bob McIntosh trainee did the heavy-lifting up front against four rivals and led into the stretch off a 1:28.1 three-quarter time.

In the stretch, Smart As Hill angled from the pocket and drew alongside the leader for the stretch battle. Royal Rob held off the challenger to prevail by a head in 1:56.4. Cesar Duharas finished third, while Clothier Hanover was fourth.

A gelded son of Royalty For Life, Royal Rob came into the final with two wins in three starts. His only defeat came in last week’s second leg after making an early break.

“He’s as good a colt as there is around,” said Henry post-race. “If he stays as good as he was tonight, he’ll have a chance.”

Royal Rob was bred by Robert McIntosh Stables Inc., who co-own the rookie with Dave Boyle, Gordon Wright and Randy Liepa. The Royal For Life gelding is currently the nation’s fastest rookie trotter with a mark of 1:56.1 taken in an Ontario Sires Stakes Gold event on July 31. He paid $2.80 to win.

Sette Deo stepped up at the right time to break her maiden in the Pure Ivory Series final. The Ben Baillargeon trainee and driver Henry, who was steering for the first time, came first over from third on the far turn and marched right by with a :28.4 final-quarter for a 1:57.4 score.

Race-favourite Dark As A Pocket, who entered on a three-race win streak, made the front at the opening-quarter and led the fillies into the lane before making a break after surrendering the lead.

A daughter of Chapter Seven, Sette Deo had hit the board only once in three starts entering Thursday’s dash. The Baillargeon trainee finished third in the first leg and fifth in last week’s second round.

“She trained good all winter, but for some reason I’m just late with a few of these babies this year,” said Baillargeon following the race. “Mario [Baillargeon] did a great job teaching her to go the last two times he drove her...tonight I told Trevor ‘Lets race, we’re going for some money, so make sure we race.’”

Sette Deo is owned by Baillargeon, Claude Hamel and Nunzio & Santo Vena. She was a $42,000 Lexington Selected Yearling Sale purchase. She paid $11.50 to win.

(With files from Woodbine Mohawk Park)