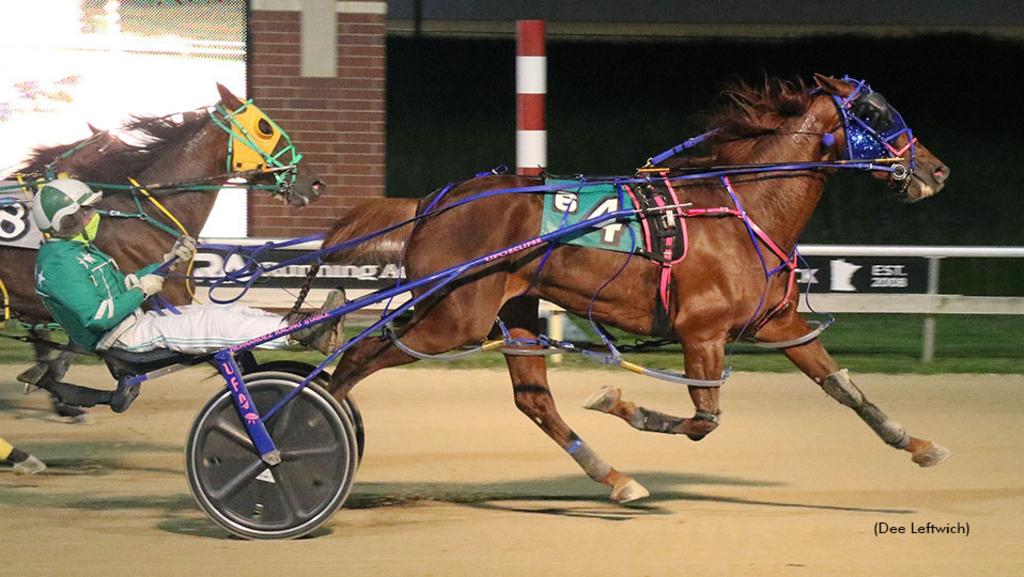 Beautiful weather, a big feature race event and a solid undercard all contributed to a magical night at Running Aces on Sunday (Aug. 21) where a total of $414,945 was wagered for a new track handle mark, eclipsing the previous record of $399,898, which was set earlier this season.

The nine-race program featured the $35,000 Ron Banks Memorial Pace as well as the $19,800 Open Handicap Trot, $15,600 Fillies & Mares Open II Handicap Pace and two divisions of the $33,000 Minnesota-sired sophomore trot. There were just two winning favourites on the night.

The Banks final for fillies and mares did not disappoint and was action-packed from start to finish.

Gottalovemyshadow and driver Chip Lackey surged from the gate and were the first to find the front but they were immediately challenged by race favourite Hottieonthehorizon (Luke Plano). who took over the top well before the quarter while JK My Girl got away sharply in third and the timer flashed :27.3.

Bettor Trix N (Rick Magee), who had briefly dropped in fourth from post seven, launched an early attack to go after the front and cleared the top near the (:56.3) half-mile juncture, while Always Choose Chip (Brady Jenson) also moved out and was then caught first-over down the backside.

Rockin With Lou (Dean Magee) had followed the outer flow, then tipped three-wide heading for the far turn and the field was stacked up as they passed three-quarters in 1:25.1.

Bettor Trix N was under siege as they rounded for home and Rockin With Lou continued to pace strong to take a short lead while Hottieonthehorizon surged inside and Always Choose Chip fought on gamely.

Gottalovemyshadow had saved ground throughout and was angled to the far outside in the lane and she had plenty of late pace to surge past her rivals and score a 10-1 upset in a thrilling finish, stopping the timer in 1:54.1 for a one-length tally. Rockin With Lou had to settle for second over Hottieonthehorizon and Always Choose Chip.

Gottalovemyshadow ($23.40) is an eight-year-old daughter of Shadow Play, owned by Joseph Scanio, James Cosenza and trainer Maria Alvarez. She races from the Williams Hernandez stable and now shows six wins in 24 starts this year, and career stats of 32 wins and $331,570.

All American N (Plano, $3) won the Open Handicap Trot in gate-to-wire fashion for two in a row, holding off longshot Resita (Rick Magee) by a neck in 1:55.3 for his seventh win in 13 starts this year. He is also owned and trained by Maria Alvarez and races from the Williams Hernandez stable.

Graceful Horizon (Rick Magee, $4) was much the best in the Mares Open II Handicap Pace, scoring by 5-1/2 lengths in 1:53.1 over Shesureissomething (Kerwood) and Tenthousand Angels (Plano) for her second local win in three local outings. The winner is owned by Set The Pace Racing and trained by Jessica Johnson.

Cobra Venom (Gary Magee, $20.20) made it two wins in a row by taking the sophomore male trot by 1-1/4 lengths over Shadow Fax (Detgen) in a career-best 1:59 with longshot TA Woody Azzzz (Jenson) getting third. The winner is also owned by Gary Magee as well as Donna Magee.

Scroll On By (Rick Magee, $8.60) picked up her fifth seasonal win in the sophomore filly trot, winning a three-way photo by a head in 1:57.4 for a new career mark. Willamar Spark (Dean Magee) was second-best and CR Promise To You (Jenson) was a close third. The winner is owned by Kennedy Roland and trained by Dan Roland.

Rick Magee led the program with a driving triple while Luke Plano and trainer Maria Alvarez both posted doubles.

In addition to the record $414,945 wagered on the nine-race program, the track also eclipsed the previous all-sources total handle mark for one season of $8,717,522.14, which was recorded in 2019. After Sunday night, the 2022 total currently stands at $9,028,686.60 and there are 12 racing nights left in the season, which will continue to increase the new record amount.

The 2019 number was achieved across a total of 505 races on the season. So far in 2022, there have been 385 races conducted at Running Aces and the total number of races for 2022 should fall very close to the 2019 total number at seasons end.

The per-race average handle comparison between the 2019 numbers and 2022 currently shows an impressive increase of 35.85 per cent.

Live harness racing returns to Running Aces on Tuesday (Aug. 23) and the program will feature 'Dollar Night' specials. The 10-race program will also offer a $15,179 carryover in the 20-cent Pick-5 Jackpot wager. First post is at 7 p.m. (CDT).

The 2022 season continues through Sept. 17, with racing on a Tuesday, Thursday and Sunday basis through Sept. 13, and special programs on Friday, Sept. 16 and Saturday, Sept. 17 for Champions weekend. All post times are at 7 p.m. (CDT).