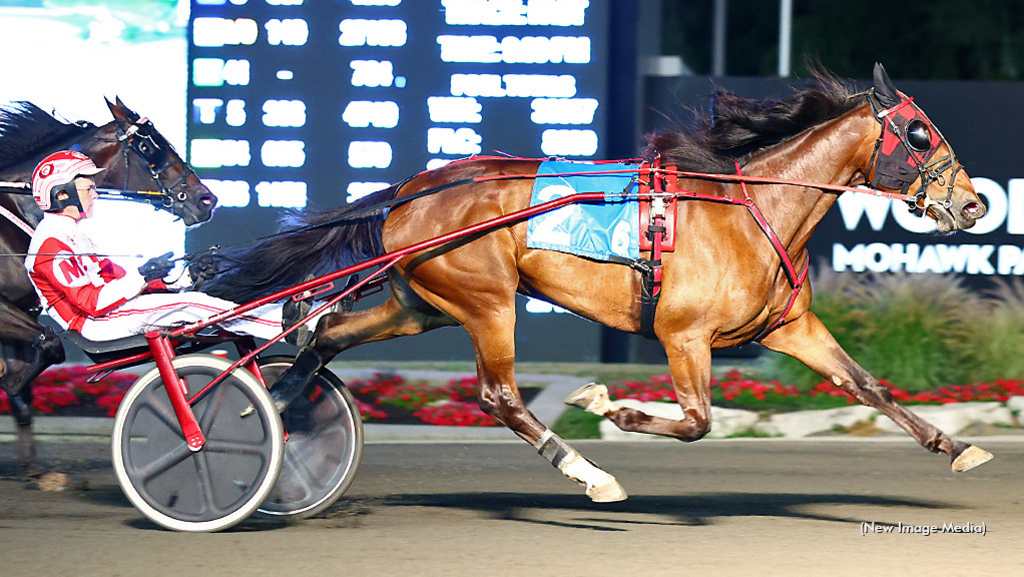 Rookie trotters took the spotlight on Saturday (Aug. 20) at Woodbine Mohawk Park with eliminations for the William Wellwood Memorial and Peaceful Way.

The Saturday evening program featured five elimination races, including three for the Wellwood Memorial, which offers a slot in the Mohawk Million to the horse that wins the final.

A group of 25 two-year-old colt and gelding trotters were split into three $30,000 eliminations for the Wellwood Memorial.

Winners Bet ($3.40) took advantage of a soft middle half engineered by driver Doug McNair to deliver as the 3-5 choice in the first Wellwood elim. Sitting in fourth early, McNair and Winners Bet cleared Tuscan Prince (Bob McClure) after a :59 half and then stole another :30.1 quarter heading to the third station. That breather helped Winners Bet repel the bid of Dahlquist Hanover (Trevor Henry) around the far turn, sprint home in :27.2 and fend off the late threat of Tuscan Prince to win by a neck in 1:56.3. Gaines Hanover (Louis-Philippe Roy) nabbed the show spot.

Lindy Farms Of Connecticut and Robert Rudolph of Vineland, N.J. own Winners Bet (Walner - Side Bet Hanover), who picked up his second straight win for trainer Domenico Cecere. In four starts, Winners bet has finished in the top three on each attempt (2-1-1) while banking $33,600.

The second Wellwood elim wasn't nearly as chalky as Oh Look Magic ($52.30) and Matt Bax connected for a 25-1 stunner. Bax played catch-me-if-you-can with his eight rivals, and those rivals had no answer to his 1:55.1 career best speed. Ghostly Casper (Sylvain Filion) nearly had the answer for the spell cast by Oh Look Magic, but fell a neck short in his late rally. Favoured French Wine (Andy Miller) gets into the final with a third-place finish.

Sporting $27,400 in earnings after the Wellwood elim win, International Man (International Moni - Birthright) picked up his second win in three starts. He finished third by a neck in the other.

The top-three finishers, plus a fourth-place finisher drawn by lot, will advance to the rich Wellwood Memorial final on August 27.

The Peaceful Way eliminations had a pair of seven-horse $30,000 divisions contested.

Warrawee Yes ($11.10) picked up her first career victory in style with a wire-to-wire score in the first Peaceful Way elimination. Driven by Louis-Philippe Roy, the daughter of Walner - Sound Check was three parts of a length better than the appropriately-named longshot Shesundertheradar (Sylvain Filion) and favoured Graceful Patty (Doug McNair) with the mile timed in 1:55.3. Tactical Planner (Tyler Jones) and Horn Player (Trevor Henry) rounded out the top five.

Righteous Resolve ($13.00) was not impressed by the 1-9 odds applied to Heart On Fire in the second Peaceful Way elimination, and the OSS star converted a pocket trip into a new lifetime best while matching the 1:55.3 mile time of the first elim. Paul MacDonell asked Righteous Resolve to pounce on the tempo-setting Heart On Fire (Dexter Dunn) late in the mile, and his filly responded willingly to win by 1-1/2 lengths. Quite Fast (Matt Bax), Winooski (Tyler Jones) and Northern Magenta (James MacDonald) also advance to the Peaceful Way final from the second elim as the third, fourth and fifth-place finishers.

Owned by her breeders Bet Max Stables Inc. of Casco and Benenati Inc. of Clinton Twp, Mich., Righteous Resolve (Resolve - Motown Muscle) boasts a 4-1-0 record from five starts with $150,525 in earnings. The top five finishers from each Peaceful Way elimination advance to the final on August 27.