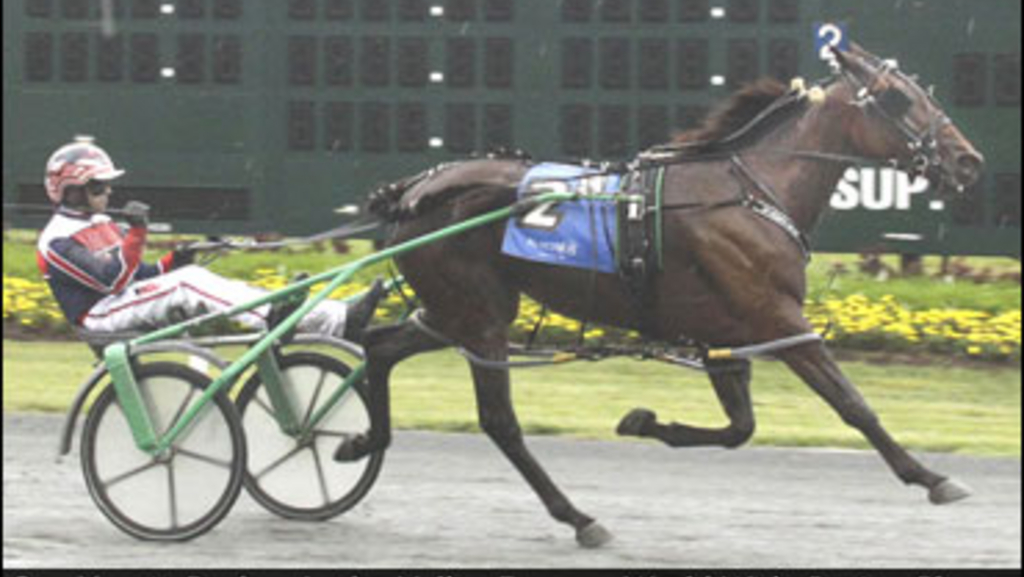 Undefeated three-year-old pacing filly See You At Peelers continued her storybook career, as she added the $350,000 Valley Forge to her list of conquests during Harrah's Chester Super Stakes Sunday card

of harness racing. Manofmanymissions won the $500,000 Colonial Trot and Roll With Joe captured the $500,000 Battle Of The Brandywine.

The Bettors Delight-West Side Glory miss pushed her win streak to 22 with today’s victory and boosted her bankroll to $1,479,592 in the process for trainer Jimmy Takter and owners John and Jim Fielding of Toronto, Ont., and Christina Takter of East Windsor, New Jersey.

When the gate folded, Kripsy Apple sprinted to command from the inside post position ahead of See You At Peelers and driver Marcus Johansson, but the undefeated filly quickly brushed to command before the opening quarter in :26.4.

Idyllic launched a first over attack from third during the second interval with Drop The Ball following her cover, but could not catch See You At Peelers as she sped past the half in :54.4 and kicked clear by two lengths at three-quarters in 1:22.2.

See You At Peelers extended her lead to four lengths in the stretch en route to the 1:50.2 triumph over the 'good' track. Krispy Apple was second with Idyllic finishing third.

“The strategy was just to stay out of trouble. I tried to do the best I could. When you have a good one like that you have a lot of options," said Johansson of his decision to take the lead before the quarter pole. "I saw Yannick [Gingras and Drop The Ball] was second over and I was a little scared of that horse. I know she can finish a little bit so I thought if I stepped on the gas [leading up the three-quarters] she wasn’t going to catch me.”

The victory was See You At Peeler's first since capturing a division of the New York Sires Stakes at Yonkers Raceway on July 28. She was scratched from her next scheduled start in the New York State Fair Stakes on August 14 at Tioga Downs.

“She’s a fantastic animal. She’s so unique," said Jimmy Takter. "It's on the fourth week since she raced last and you know, I’m not a big believer in training fast miles in between. The fastest mile she went last Tuesday was a [1]:56 mile and unfortunately she couldn't race in Tioga because of the weather. She’s just one of the best that’s been around on the racetrack in the history of harness racing.”

With cloudy and wet conditions today, Takter noted his concerns this time out were eased with the condition of the Chester track.

"Yes I was [concerned] but normally here at Chester if it’s raining good at least the track stays firm. Up in Tioga they put the material on the track after the warm up and you don’t want to be scared that something could happen if she slipped on it or anything like that. You don’t want to see that happen.”

Driver Tim Tetrick won both of the Valley Forge Consolations with New Album and Ms Malicious.

New Album ($10.80) and Tetrick yielded to 7-5 favourite Pretty Katherine during the opening quarter and watched as she battled with Strike An Attitude on top in the $150,000 Consolation I before shooting up the rail to score the career-best 1:51.2 victory. Pretty Katherine finished second with Southwind Jazmin rallying wide off cover to grab third. Mark Kesmodel trains and co-owns the daughter of Western Terror-Always Remember with partners Jeffrey Bamond of Brick, New Jersey and the Baron Racing Stable of Horsham, Pennsylvania.

Even-money favourite Ms Malicious ($4) delivered on her pari-mutuel promise in the $75,000 Consolation II as Tetrick sent the Art Major-Silky miss to command at the half and charged to a two and a half length triumph in a career-best 1:51.4. Shabalabadingdong and Real Amor rounded out the top three. Jerry Silverman trains the winning filly for owner Marvin Rounick of Narberth, Pennsylvania.

At the midway point, driver Dave Miller sent Manofmanymissions first over from fourth and was within reach of the lead by three-quarters in 1:24.

The Yankee Glide-Armbro Vanquish colt went head-to-head with Broad Bahn around the turn, taking over in the stretch and holding off the quick-closing Dejarmbro by three-quarters of a length for the 1:53 victory. Pastor Stephen finished third over Broad Bahn.

“Erv [trainer Erv Miller] just said be careful with him and don’t rush him anywhere in the mile and it worked out good,” said Dave Miller, who picked up the drive while the colt’s regular reinsman Andy Miller drove Whatever It Takes for wife, trainer Julie Miller. “He got off the gate way better than I thought he was going to and I came with him there at the half. He’s just a good a horse. If he’s on his game then he had a good chance in there and he was on his game today.”

Dave Miller noted that he was a little concerned going first up against the Hambletonian winner, but said his colt felt good and seemed to be trotting square so he took his shot.

Manofmanymissions paid $6.40 to win with his miscue in the Hambletonian behind him.

"I think that day, late in the day, he wasn’t feeling the best maybe and he wasn’t getting a hold of the racetrack the way he was," said trainer Erv Miller of his colt's miscue in the $1.5 million event two starts ago. "He got a little tired and didn’t get it done that day. Of course he was good the next week [winning the New Jersey Sires Stakes Championship] and great today.”

The career winner of $904,900 is owned by the Manofmanymissions Stable of Lexington, Kentucky, Mystical Marker Farms LLC of Dyer, Indiana, and the M Biasuzzi Stable Inc. of Pompano Beach, Florida.

Heavy 1-5 favourite Luckycharm Hanover ($2.40) was a dominant wire-to-wire winner in the $100,000 Consolation II, stopping the clock in 1:55.4 with Miller in tow. Thomas Haughton trains the son of Andover Hall-Lady Luck Hanover for the ownership group consisting of Arthur Rudolph of Boca Raton, Florida, the Rudolph Stables Inc. of Ronkonkoma, New York, and Bernard Owen of Boynton Beach, Florida.

Three-year-old pacing colt Roll With Joe went all the way, holding off Alsace Hanover to score the victory in the $500,000 Battle of the Brandywine by a nose.

With the inside advantage, Meadowlands Pace champion and Pepsi North America Cup runner-up Roll With Joe and driver Ron Pierce won an early three-horse tussle for the lead while Powerful Mist settled into the pocket and the rough-gaited Custard The Dragon took back to third.

Roll With Joe led the field through fractions of :26.4, :54.4 and 1:21.2 while even-money favourite Alsace Hanover advanced first over with Big Bad John following his cover and angling wide.

Alsace Hanover lunged at the leader down the stretch, but Roll With Joe found the wire just in time to score the 1:49.2 triumph. Big Bad John finished third.

“I said this colt has a lot of talent and he was going to go places, but time will tell,” said trainer Ed Hart, reminiscing on the colt’s beginnings. “This is really a dream. This colt’s been super all year and he’s a super nice horse.

“It’s very tough [to maintain a racehorse over the stakes season] because they’re on their toes every time they race, they have to be sharp. They go such brutal miles nowadays. It is tough and that’s why there’s not too many at this top level. Only the tough survive.”

Roll With Joe paid $6.20 to win. The son of Cams Card Shark-Classic Wish, who has amassed $1,369,070 in career earnings, is owned by Blue Chip Bloodstock Inc., Stephen Demeter and the Not To Worry Stable, all of New York, and Winbak Farm of Chesapeake City, Maryland.

Following the Cane Pace, Roll With Joe will head to the Little Brown Jug.

Mystic Desire ($19.20) and Tetrick gave way to even-money favourite Shadyshark Hanover past the opening quarter in the $200,000 Consolation I, but shot up the rail down the stretch to score the 1:51.2 triumph. Shadyshark Hanover was second with Hugadragon finishing third. The Real Desire-Cannes Festival colt’s bankroll surged past the half-million dollar mark with his winnings today for conditioner Ross Croghan and owners the Let It Ride Stables Inc., Robert Cooper Stables LLC, and Dana Parham, all of Florida, and Jerry Silva of Long Beach, New York.

Wind Me Up ($6.80) held off first over challenger and fellow 2-1 co-favourite Prana to win the $100,000 Consolation II by just a nose in 1:50.3. Montrell Teague drove the son of Bettors Delight-Breathe for his father, trainer George Teague Jr., who co-owns with Theodore Gewertz of New York, New York, Fannin Racing LLC of Lincoln, Delaware, and Robert Feldman of Palm Beach, Florida.

A pair of $60,000 Three-Year-Old Opens (Pennsylvania Sired Preferred) were also contested with the Tyler Ramer-trained Sevruga ($6.60), in rein to Dave Palone, winning the trot race in 1:55 to push his bankroll over the $100,000 mark and NJSS Championship runner-up Rockem ($7) taking the pacing event in 1:51.1 with Dave Miller in the sulky for trainer Casie Coleman.

In the $100,000 Four-Year-Old Open Pace, Nick Surick trainee Valentino ($43.20) and the hot-handed Dave Miller kept the late-charging Shoobees Place and the pesky 3-5 favourite Delmarvelous at bay to score the upset in 1:50.2.

The classy double millionairess, Buck I St Pat ($4), brushed to the top after the opening quarter and cruised to a 1:54.1 triumph in $100,000 Open Trot for Tetrick and trainer Ron Burke.

Dave Miller earned his sixth win on the card when he and millionaire Dial Or Nodial ($6.60) plowed down St Elmo Hero at the wire to win the $100,000 Open Pace finale in 1:49.2 for trainer Jim Campbell.

She's the standardbred version of Zenyatta!!