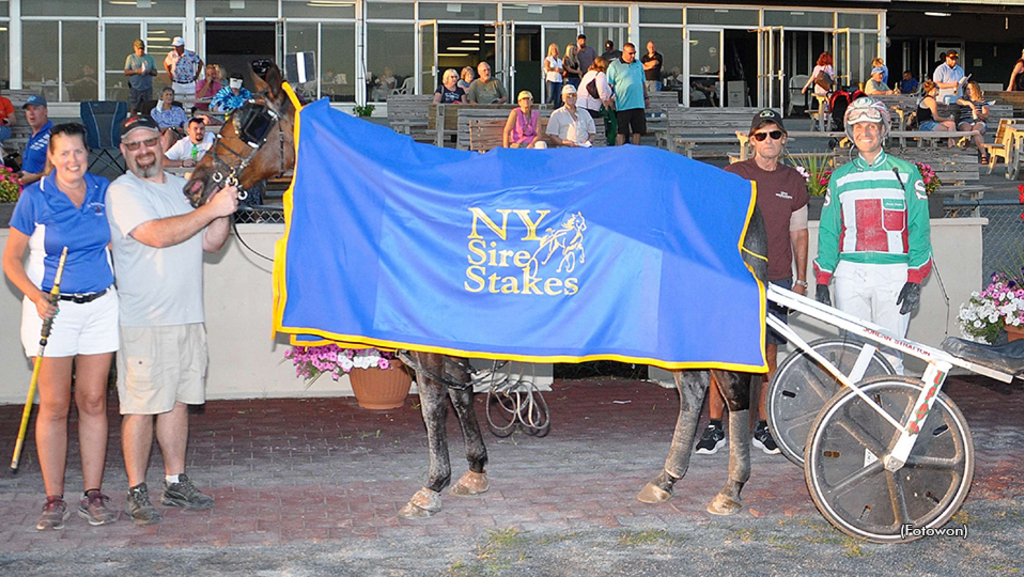 In Italian (pictured above), a full-sister to world champion $3.5 million earner Atlanta, picked up her first career win in the $35,900 first and fastest division as she inherited the top spot when the front-striding favourite, Royal Filly, was disqualified.

Mari (Jack Killeen) was first to the quarter in :28.1 before In Italian (Jordan Stratton) went to the front around the turn.  Her lead was short-lived as Royal Filly (Brian Sears) took over when they reached the backstretch and led through middle splits of :59.1 and 1:27.2. As the field reached the stretch, In Italian popped the pocket and went after Royal Filly, who crossed the finish line first but went off the course in deep stretch leading to her disqualification. In Italian was promoted the winner as she held off a late charge from Pride N Joy (Andrew McCarthy).  Mari was placed third. The winning time was 1:55.2.

A four-time starter trained by Ron Burke, In Italian (Chapter Seven-Hemi Blue Chip) was a $750,000 yearling purchase from the Harrisburg Sale by Brad Grant of Milton, Ont. and Howard Taylor of Philadelphia, Pennsylvania. She paid $7.10 to win as the 5-2 third choice.

Woolco (Tyler Buter) put up a :27.3 first quarter then the favoured Instagram Model (Andrew McCarthy) took over as they headed for the backstretch.  She was first to the half in :58.3 and breezed to three-quarters in 1:27.4. As the field made the turn for home, Instagram Model had plenty in the tank and won easily by four lengths. Woolco held on for second and Unicorn Blue Chip (Brian Sears) finished third.

Instagram Model is a filly by Chapter Seven out of Check Out Trixie.  A $350,000 Lexington Select Yearling Sale acquisition, she is trained by Annie Stoebe and owned by R Lynn Curry of West Chester, Pennsylvania.  Instagram Model now has three victories from four lifetime starts.  She paid $2.60 to win.

The final $35,900 division was won by the favoured filly Ruth Honig.

Ruth Honig (Tyler Buter) led the way to the quarter in :28.2 and half in :59 before Kayleigh S (Brian Sears) came first-up to challenge going to three-quarters in 1:28. As the fillies made the turn for home, Ruth Honig found another gear and won by 1-1/2 lengths in a lifetime best clocking of 1:56.3.  Midwind Success (Jordan Stratton) came up to finish second and Jeans Action (Andrew McCarthy) was third best over Kayleigh S.

Ruth Honig, a filly by Chapter Seven out of Lady Grey, was a $95,000 yearling from the Harrisburg Sale. She is owned by the Shermay Stables of Chester, New Jersey. The Lucas Wallin trainee has won back-to-back NYSS starts and now has three wins from four outings. She paid $3.70 to win.