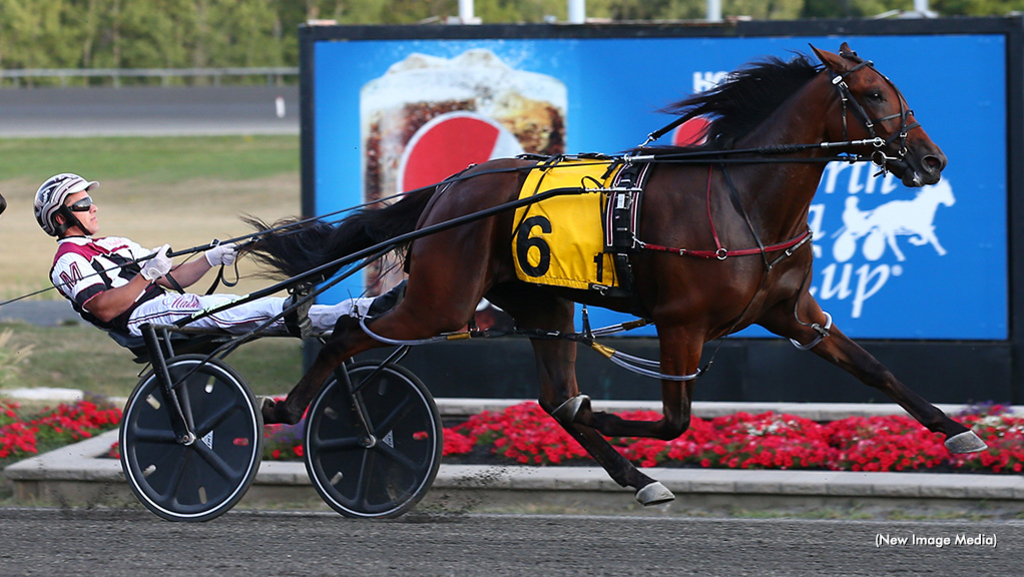 Woodbine Mohawk Park played host to five Ontario Sires Stakes Grassroots events for two-year-old pacing colts and geldings on Thursday night (Aug. 18) and the team of trainer Gregg McNair and driver Doug McNair exited the card with the winner’s cheque from two of the five splits.

Team McNair opened the night with a victory by Whatchulookin At in 1:54.1. The Hes Watching colt pushed forward from midfield into a :26.4 first quarter and landed in the pocket when Joker On Jack circled to the lead before a :56.1 half. Doug McNair then moved his charge for the lead heading to three-quarters in 1:26 and coasted to the finish to deliver as the 4-5 favourite by 1-1/4 lengths. Joker On Jack took second with Verdun closing for third.

Gregg McNair co-owns Watchulookin At – a homebred for him, Jim Newton, Bloomingwood Farms Ltd. – and Paul Kidd. He won his second race from three starts, has now earned $20,580 and paid $3.80 to win.

Later in the card, the McNairs scored with The Moment Arose as the 1-5 favourite in 1:55.2. Protecting position from the pylons to race fourth to a :27.4 first quarter, The Moment Arose stayed put while Best Shadow took over the lead to a :57.2 half. Doug McNair then sent the Control The Moment colt off the pegs to attack the pacesetter to three-quarters in 1:27.1 and powered to the front straightening for the finish. The Moment Arose held firm to the finish to win by a length over fast-closing Hes A Sweetheart while Delightful Leader followed the winner second over to take third.

The Moment Arose races for owners John Stamatis, Joseph Orofiamma and James Georgakopoulos. He won his third race from five starts, has now earned $44,296 and paid $2.70 to win.

Driver James MacDonald also came from off the speed to land a 1:55 victory in the second Grassroots division with Twin B Risenshine. The Francis Dumouchel trainee raced third to a :27.1 first quarter and got shuffled to fifth as favourite Nulli Secondus grabbed the lead to a :56.4 half. MacDonald angled Twin B Risenshine first over to three-quarters in 1:25.2 and continued advancing for home, surging a half length in front of Nulli Secondus at the finish with Sharky rallying off a pylon trip for third.

Ahi Sunshine posted the co-fastest mile of the Grassroots divisions, swooping from off cover to a 1:53.2 win. Driver Sylvain Filion sat sixth with Ahi Sunshine as Shadows Terror took the lead to a :27 first quarter and Conquest Seelster circled for the front to a :55.3 half. As the tempo softened, the outer tier sprung into action with The Golden Jet swinging toward the center of the course to press for the lead to three-quarters in 1:25.1. Ahi Sunshine tracked that move spinning for home and the Shawn Steacy pupil overpowered The Golden Jet to the beam to win by a length. D A Home Stretch kicked from last for third.

A homebred for Hudson Standardbred Stable Inc., Ahi Sunshine also competes for partners Allen Sellen and Bridle Path Stables Ltd. The Sunshine Beach colt nabbed his second win from five starts to push his bankroll to $22,924. He paid $5.60 to win.

John Pentland trainee Reign Supreme later matched the fastest mile of the Grassroots session when winning the final division in 1:53.2. Following suit with the other winners on the night, driver Louis-Philippe Roy sat off the speed with Reign Supreme while Watchmaker pressed the speed through a :27.2 first quarter and led to a :56.1 half. Roy then sent Reign Supreme toward the top heading to three-quarters in 1:24.2 and marched to challenge the leader coming into the stretch. The Control The Moment colt kept digging into the pacesetter and slid to the front nearing the beam, winning by 1-3/4 lengths over closing Nothing Bettor. Watchmaker settled for third.

Zachary Carroll bred and owns Reign Supreme, who won his second race from three starts and has now earned $19,100. He paid $6.80 to win.