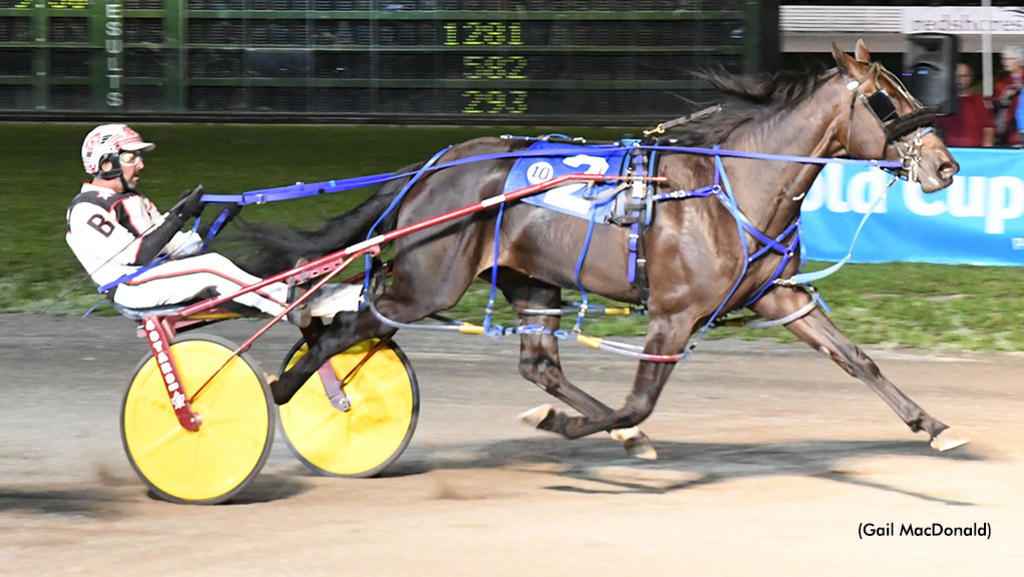 Our Girl Annie was aggressive from the start in her $12,560 Atlantic Sires Stakes "A" division assignment, laying the opening quarter of :29.3. She then released Entitled Express (Driven by Marc Campbell) to the lead, but came right back around at the half of :58.2. Three-quarters were reached in 1:28.1, then the daughter of Arthur Blue Chip powered on to win by a length in 1:57.1 over Rock N Roll Cays (Ken Murphy) and Too Much For You (David Dowling). Eddy Doucette trains the undefeated two-year-old pacing filly for owners Blaine, Jessica and Jennifer Thibeau of Kensington.

Elm Grove Redwine claimed the top prize in her $12,560 A-split in 2:00.1 for trainer-driver David Dowling over Howmac Julia (Jason Hughes) and Howmac Jazy Girl (Brett MacDonald). Alex Quinn of York owns the filly along with Brittany Watts of Springvale and Carl Peterson of North Rustico.

Marina Del Rey delivered in her $12,560 "A" division as part of a driving triple for Marc Campbell. Campbell trains the 1:58.4 winner for owners Grayland Farms and Robert Sumarah of Nova Scotia. JJ America (Mark Bradley) was second ahead of Itsuptoyou (Corey MacPherson).

Campbell’s other wins came with Acrobat Hanover (1:54.3) in the Joey and Dee Arsenault Memorial for trainer Lenny Myers and with Hunger Pangs (1:55.1) from the Blaine McKenna barn in the Wilbur and Eileen Doyle Memorial.

Legendary Ron claimed the $3,000 featured pace of the night in the Wal and Joe Hennessey Memorial with a front end score of 1:54.4 for driver Dale Spence and trainer Nicholas Oakes. Douglas Matheson of Cornwall owns the son of A Rocknroll Dance-Safe From Harm.