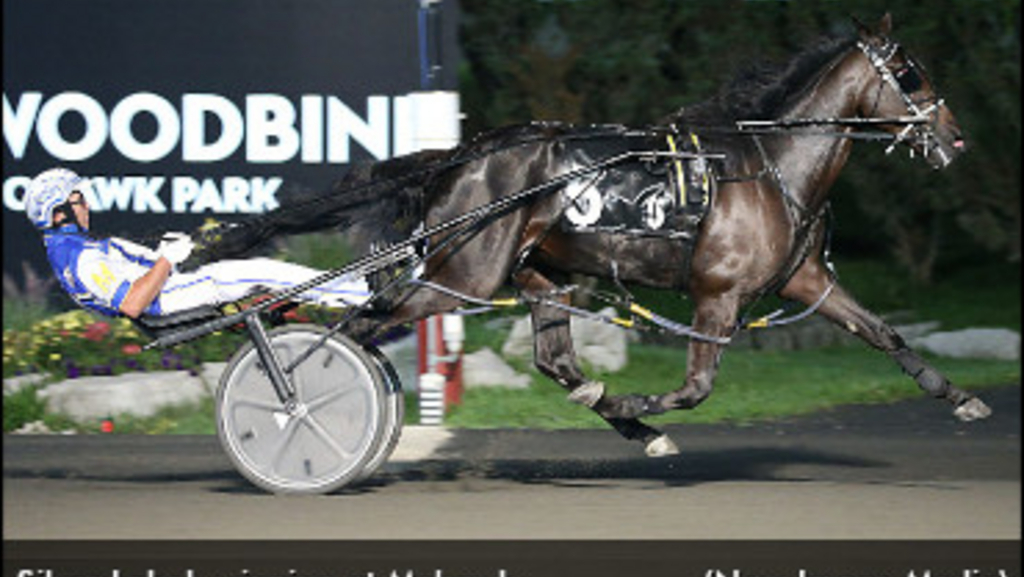 Silver Label was first out of the gate for the Millar Farms team, starting from Post 5 in the first $103,000 Gold division. When many of his peers opted to float away from the gate, MacDonald shifted Silver Label into gear and the filly led the field of 10 to a :27.1 opening quarter. The fan favourites yielded briefly to Watch Her Dance, but MacDonald had Silver Label back in front by the :55.1 half. Around the final turn Silver Label opened up three lengths on her peers and was on cruise control down the stretch, pacing under the wire in a personal best 1:52. Fade Out and Love That Smile closed well for second and third, three and one-quarter lengths behind Silver Label.

“It was nice seeing her pace around the turn, the way she opened up on them. I think that was a really big step forward for her, she kind of proved herself as one of the tops in the division now,” said Gallucci. “She is really confident right now and she’s just really full of herself. We couldn’t really ask for much more from her at this point.”

Gallucci said the daughter of Bettors Delight and Hidden Gem trained down like a professional all winter, but her full siblings were more successful as older horses so they were hopeful, but not confident that she would fulfill her potential this season.

“She always seemed to do everything so easy; all the steps were so easy for her,” said the Stouffville resident. “It seems like one of her best attributes is you can do whatever you want with her. You can leave, you can take her off the gate, she’s just really willing.

“She’s just got so many gears; hopefully we haven’t seen the bottom of her yet.”

The win was Silver Label’s second in Gold Series action and her fourth in four starts. She was also victorious in the July 6 Grassroots opener at Georgian Downs and in an Aug. 2 overnight at Woodbine Mohawk Park.

Four races later Gallucci was overcome with emotion when Prohibition Legal put on a display of raw power, closing from fifth to collar pacesetting favourite Balance and pocket-sitter Flo in a personal best 1:52. Two weeks ago the filly was at the University of Guelph’s Equine Clinic with a bout of abdominal pain and the Millar Farms’ team did not know whether she would race again this summer, let alone recover in time to compete in Tuesday’s leg.

“This win was just so special. It’s one I am not going to forget.”

Gallucci kept MacDonald apprised of the filly’s health status and was grateful that the driver stuck with the two-time Gold winner. In addition to Prohibition Legal, the Guelph, Ont. resident had the option to drive Balance, who he guided to a commanding 1:53.2 win in the Whenuwishuponastar Final on Aug. 10. The trainer also appreciated the trip MacDonald crafted for Prohibition Legal.

“It’s just unbelievable how fast this horse can come off a helmet, and that was the first time we really got to see it in a race. The other races she was first over and on the lead, and I think this is her best racing tactics, off the pace and coming off a helmet,” said Gallucci of the daughter of Big Jim and Catch A Wish. “It’s pretty surreal to watch her do it, it’s amazing. For everything she went through, she made us all really proud and I’m really happy for George (Millar). It’s just really amazing.”

So long as they remain happy and healthy, in the coming weeks Silver Label and Prohibition Legal’s schedules will diverge. Silver Label has the remaining Gold Series events, Sept. 3 and Oct. 2 at Woodbine Mohawk Park, and the Sept. 11 Champlain Stakes. Prohibition Legal has those, along with the Aug. 28 Eternal Camnation and the Shes A Great Lady, with eliminations Sept. 18 and the final Sept. 25, among her options.

“We’ll just kind of take it week to week and hope that they’re ready to go when the money is on the line. Luckily these fillies have been so far, hopefully it carries forward,” said Gallucci. “It would be really nice to win one of the major Grand Circuit races, but I am just as happy winning a Gold. It’s really amazing wining these races.”

On Thursday evening (Aug. 19), Woodbine Mohawk Park welcomes back the two-year-old trotting colts for their third Gold Series Leg. The colts will compete in a trio of $69,733 divisions, going postward in Races 2, 6, and 10. Fans can download a program and watch the live stream on the Woodbine Mohawk Park website or register here to attend in person.