Party Girl Hill has given owner Tom Hill reason to celebrate. Unraced at age two because of a stress fracture, the three-year-old female pacer is 6-for-6 in 2020 as she prepares for a Fan Hanover elimination on Saturday at Woodbine Mohawk Park.

The Chris Ryder-trainee has won all but one start by at least 1-1/4 lengths, including an 11-3/4 length romp in her debut June 12 at The Meadowlands. She won her most recent race, a sire stakes division at The Downs at Mohegan Sun Pocono, by 4-1/2 lengths in 1:49. It was her third consecutive sub-1:50 win on a five-eighths-mile track and the fastest mile on a five-eighths oval by a three-year-old filly pacer in four years, only two-fifths of a second off the world record.

Hill bred Party Girl Hill, a daughter of Captaintreacherous out of Look Cheap. Party Girl Hill trained well as a two-year-old but was injured just prior to qualifying.

“There was no surgery, we just had to give her the time to heal,” Hill said. “She was training like an absolute monster. If we didn’t have to quit with her, there’s no doubt she would have been a top-class two-year-old.” 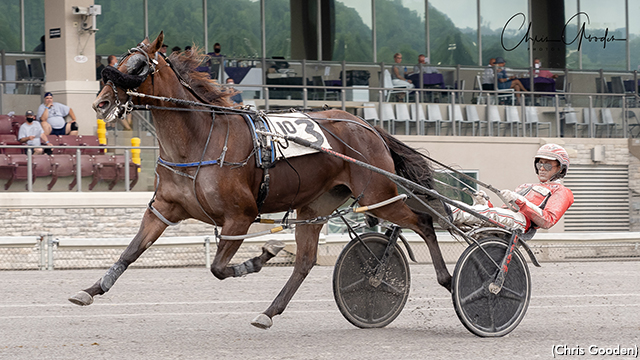 But Party Girl Hill is something different.

“She’s the best horse I’ve ever been fortunate enough to own,” Hill said. “She’s just in a different sphere. We knew last year she was a tremendously fast horse, and a good horse. If I said I knew she would be as good as she is, I’d be telling you lies, but she had blistering speed and she was intelligent. Whatever you want to do, she will do it.

“Chris says she’s easy on herself, nothing bothers her. She travels good, she sleeps good, she eats good, and after a race you wouldn’t think she had one. She can race from the front, she can do it from behind, she can get parked out; it doesn’t matter. She’s the full package. That’s what makes a champion, when you get all those things coming together.”

Party Girl Hill faces seven rivals Saturday in the second of two Fan Hanover eliminations. Doug McNair is listed to drive the filly, who will start from post two. The top five finishers from each elim will advance to the final. Party Girl Hill had been entered previously to race Thursday in a Pennsylvania Sire Stakes division at Harrah’s Philadelphia, but will be scratched.

“I’m just hoping she carries on and stays healthy,” Hill said. “When she’s on her game, I don’t think there is a three-year-old filly that can go with her. If she stays healthy, I think she can be a big contender for Horse of the Year. She’s just a special horse. She’s a gift from God.”