Streaks Extend And Snap In ATSS 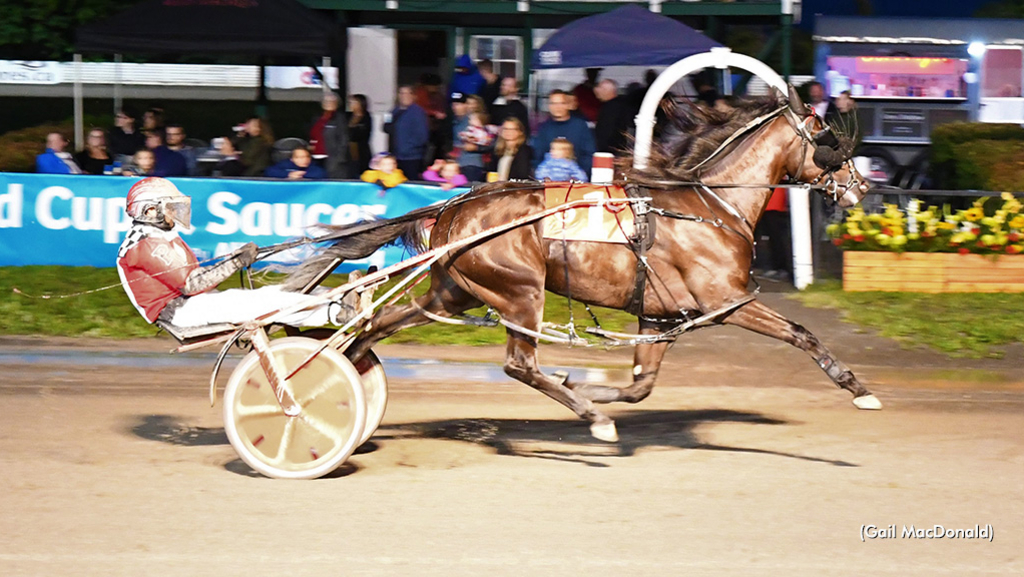 Expected outcomes and unforeseen upsets were all around during Atlantic Sires action Wednesday evening (Aug. 17) at Red Shores Racetrack and Casino as part of Old Home Week racing.

The Atlantic Sires Stakes for two-year-old pacing colts was on display with Malignity winning his fifth straight race in a $16,940 Atlantic Sires Stakes "A" division. The Malicious colt guarded the pylons and romped away from his competition in 1:56.1 for a 19-length score over a wet track rated one-second off. Paul Langille was in the bike aboard his trainee as he defeated No Boats On Sunday (Driven by Myles Heffernan Sr.) while Nibbler (Jason Hughes) was third. Debbie Francis and Rosanne Langille of Nova Scotia share ownership of the youngster.

In the other "A" division for rookie colts, 1-9 favourite Tobins Profit (Corey MacPherson) suffered a break in stride at the quarter pole and ended fourth to have his undefeated win streak snapped at five. Arthur Blue Chip colt Fishermans Son (Danny Gillis) picked up the pieces to get the lion’s share of the $16,940 purse in 1:58.2 ahead of Howmac Charmer (David Dowling) and Bacononabiscuit (Marc Campbell). Walter Walker co-owns and trains Fishermans Son in partnership with Angus MacInnis of Mabou, N.S.

Bad Boy Boogie won the lone $3,000 "B" division for two-year-old colts in 2:02.1 for driver Mike McGuigan and owner-trainer Dana Sweet of Bloomfield Station.

Trainer Todd Walsh was perfect on the night, winning with Saulsbrook Velveta (David Dowling) in Race 1 and Better Than Men (Jason Hughes) Race 8, both in 1:58.3.