Up Helly AA On An Awesome Roll 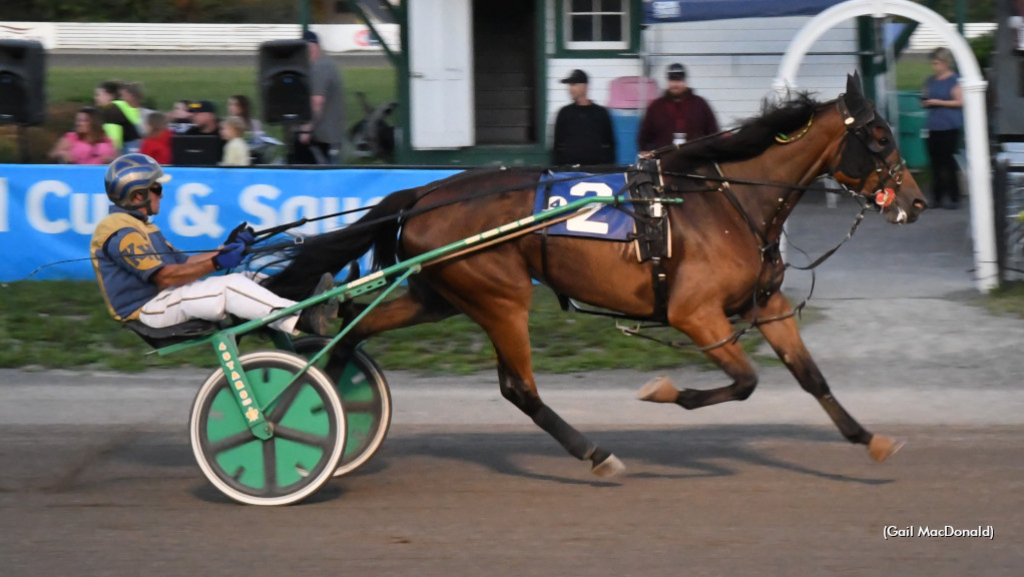 Stars of the Atlantic Sires Stakes program were on display Tuesday evening at the as the oval hosted a number of talented trotters including Up Helly AA who was trying to extend his winning streak to 14-in-a-row.

And that’s exactly what he did in the first of two $9,800 ATSS ‘A’ divisions for three-year-olds.

With Kenneth MacDonald in tow, Up Helly AA marched to the lead from Post 2 and never relinquished the top spot.  He sailed through fractions of :30.1, :59.3 and 1:30.1 before kicking home in :29.3 to win by 13 lengths over Berts Legacy in 1:59.4.  Majian Raptor took home third prize in the lopsided affair.

Sent off as the 1-9 favourite, the son of Armbro Barrister-Burnt With Finesse improved his year’s record to five-for-five with the victory.  Clare MacDonald trains the photogenic performer who hasn’t tasted defeat since finishing third in his pari-mutuel debut on July 6, 2021.  The streaking sophomore has banked over $63,000 to date for Riley Farms Ltd of .

Headline Howie turned a two-hole trip into a narrow triumph in the second division for trainer/driver Michael McGuigan.

The son of Armbro Barrister-Mad Over U tracked from the garden spot while Getting Allfiredup led the field through fractions of :30.3, 1:00.2 and 1:31.1.  Headline Howie found clearance in the lane and powered home in :28.4 to win by one-quarter of a length over Getting Allfiredup in 2:00.2.  Majian Salsa was third under the finish line.

James Whalen Jr of owns the gelding who has six wins under his belt this season from 10 attempts.  The seven-time winner, who lifted his lifetime earnings to $37,075 with the win, has now posted back-to-back victories for his connections.

Earlier on the card in the lone ATSS ‘A’ division for two-year-old trotters it was Irish Ray recovering from an early miscue to keep his perfect record intact.

Trainer/driver Marc Campbell was forced to help the gelding, who was sent off as the 1-9 favourite, get back on gait after making a break behind the starting gate.  Getting Salty got away cleanly and had the field chasing him to the quarter pole in :30.3.  Irish Ray got his act together quickly, and by the time they arrived at the half it was Irish Ray racing parked while leading at that juncture in 1:00.2.

Irish Ray then pushed on to the three-quarter pole in 1:30.4 before using a :29.4 closing quarter to win by a pair of lengths over Gettin Salty in 2:00.3.  Windemeregotmuscle took home the show dough in the six-horse affair.

It was a career-best performance for the son of Muscle Through It-Highly Organized who is owned by Three Wisemen Stable of .  His lifetime earnings shot to $31,793 with the victory.

With a power move from the backfield, Ultimatelyhandsome took Kyle Mason to the winner’s circle in the inaugural Gamester-Pinkney Memorial Cup final on Tuesday evening at Red Shores Racetrack and Casino at the Charlottetown Driving Park.

The event showcased some of the upcoming talent in the Atlantic Provinces with drivers 30 years of age and younger in the competition but it was the Saint John-born Kyle Mason that took the top prize with Ultimatelyhandsome.  He edged out Oakrock Eldorado (Driven by Brett Leblanc) in 1:59.1. Dont Ask Logan (Ryder Matthews-Rennison) rounded out the Trifecta.