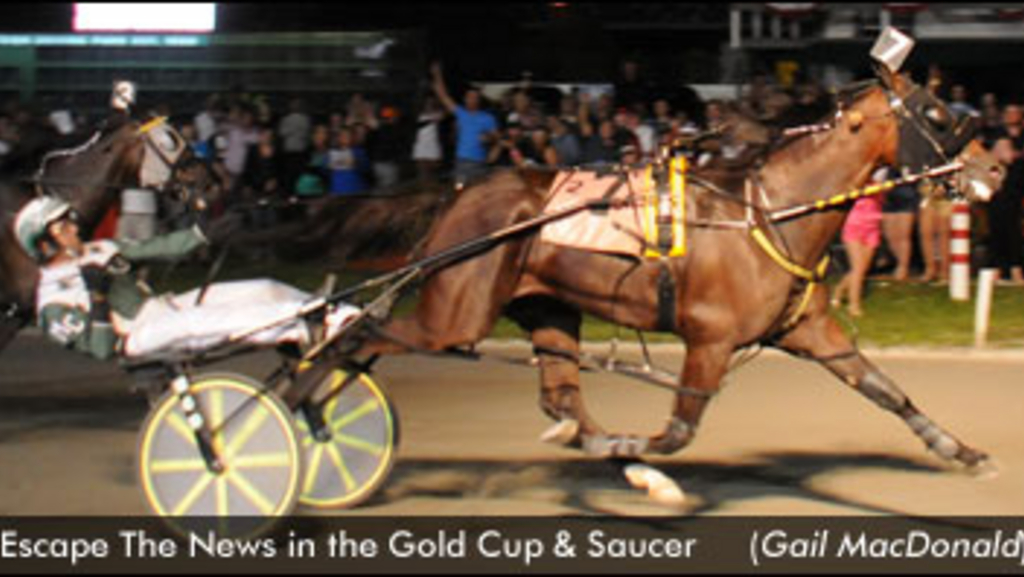 Charlottetown's leading driver Marc Campbell celebrated the biggest win of his career as he guided Escape The News to a 1:50.4 track record victory in the $60,000 Gold Cup & Saucer to close out Old Home Week on Saturday night at Red Shores at Charlottetown Driving Park.

When the wings of the gate opened for the 54th running of the Sobeys Gold Cup & Saucer, it was no surprise to see Carl Jamieson leaving from the rail with up The Credit as the Hall of Famer had declared “Yes, I'll be leaving!” during an interview on the Red Shores broadcast the previous night.

Up The Credit protected the rail position while Machs Beach Boy (James MacDonald) settled into the pocket with R Caan (Jason Ryan) parked out through a :26.2 opening panel.

R Caan went head-to-head with the leader through a sizzling :53.2 half and eventually cleared to command into the clubhouse turn.

R Caan began to open up on his rivals down the backstretch, but Hillbilly Hanover was advancing as they approached the third quarter mark in 1:21.4 with Escape The News rallying three-wide off his cover.

Hillbilly Hanover took over command in the stretch before Escape The News swept by with a :28.3 final panel to earn his 15th career win, returning $10.40 to his backers. R Caan finished third.

The time of the mile was one-fifth of a second better than the track record set by 2010 winner Part Shark and later matched by Eighteen in last year's edition. It also matched Rare Jewel and Tigerama's Canadian record for aged pacers on a half-mile track.

"It was a good trip," said Campbell after the victory. "I knew they were going crazy fractions up front and I thought it would work out in my favour for sure.

"Halfway down the stretch I thought [I had the win]. I just didn't want to fall off the bike," laughed the O'Brien Award winning horseman before being hoisted up in winner's circle celebrations.

Among the winning connections, Mickey Burke had nothing but praise for his driver.

"He is one of the top drivers in the country," said Burke. "He can drive with any of them, there's no question about it."

"All my partners are happy, how can you say anything else about it," said Burke of his first Old Home Week experience and Gold Cup & Saucer win. "It's just outstanding. We've been to some big races, but I've never seen a crowd more enthusiastic. It's unbelievable. I love this island. We will be back."

Gold Cup & Saucer runner-up Barrieau also enjoyed a successful evening as he won both $10,000 Gold divisions of the Joe O'Brien Memorial with Kevin Maclean trainees Pownal Bay Mustang in a career-best 1.56.1 and Forever Paradise in his own personal-best clocking of 1:56.3. MacLean won three races in a row as he also sent out the streaking Preferred winner Something Blue (1:56.2) in between the O'Brien splits with Brodie MacPhee driving. Reginald MacPherson of Stratford, P.E.I. shares ownership in all three winners.

Barrieau picked up another win in one of the $5,000 O'Brien Grassroots divisions with the Charles Miles-conditioned Flying Cowboy (1:58.2) during the afternoon card while the other splits went to Colbys Comet (1:55.3) and trainer/driver Darren Crowe, and Remember Will (1:57.4) with Brian MacPhee driving for Ambyr Campbell.

Barrieau also drove the one-time Troy Murray-trained Dontcallmeprincess (1:56.1) to victory lane in the $7,100 Alpine Claiming Series Final for mares. She was claimed for $4,500 from her conditioner by Kayla Habicht of Inverness, N.S.

In other action, Touch Of Lightning rallied from off the pace to win the the $11,600 Premier's Pace in a new lifetime mark of 1:53 for trainer/driver Earl Smith while Narragansett and driver Norris Rogers prevailed by a head over Sterling Seelster and Campbell in a mark of 1:56.1 in the $1,700 Norman MacPhail Memorial Pace for trainer Dale Sobey.

Just watched the replay. That

Just watched the replay. That was a thrill. The apron was shoulder to shoulder. the boys were flying around that small venue. Excitement at it's finest. I miss that so much. Now on my bucket list...
The Cup and saucer.

Man Oh Man...This is how

Man Oh Man...This is how racing and the " Marketing " of such an event should be done....and No One does it better than " The Island ". Just ask Mickey Burke how it was for him and his owners this week. This is what keeps them coming back. Now if only the other provices could follow suit, we could possibly break this vicious circle we're in and start a new and exciting process.

Congrats to Marc Campbell! You can drive with the best. With good horses in the right venue you could make some owners and yourself a lot of money!