Patrikthepiranha Powers To Win In Trial 3 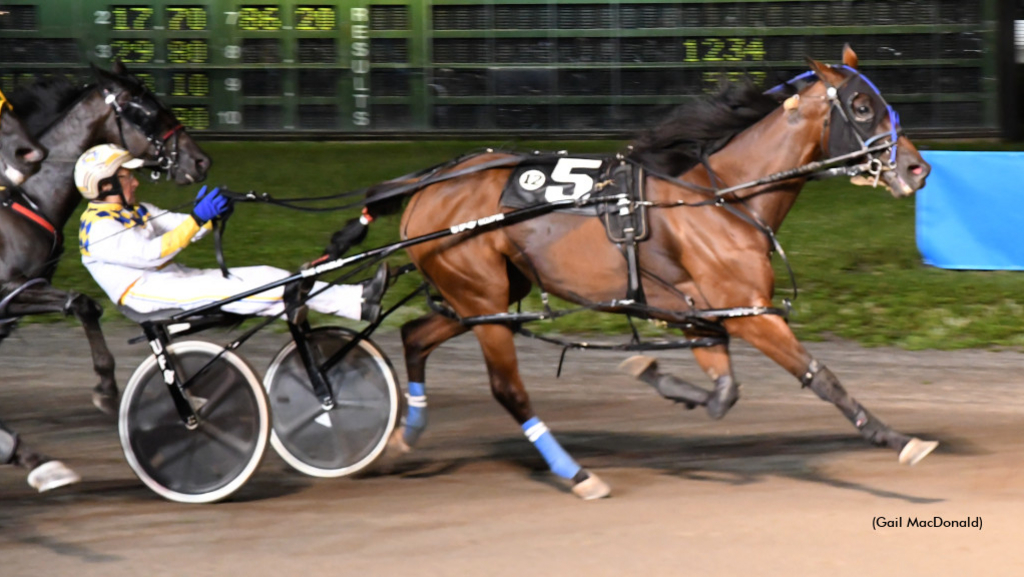 The Atlantic Lottery Gold Cup & Saucer Trial #3 went postward Monday evening at the , and Hall of Famer Wally Hennessey returned to his native land to capture the $12,500 contest with heavily-favoured Patrikthepiranha A in an eye-catching clocking of 1:51.3.

In no hurry in the early going, Hennessey got away fifth with Patrikthepiranha A while longshot Lovemyrockinbird blazed a path to the lead and then laid down first-half fractions of :27.2 and :55.3.

commenced a first-over bid on the way to the half, and he muscled his way up to the lead while racing parked past the three-quarter pole in 1:23.4.  The backfield was coming to life in a big way as Hennessey kicked out three-wide with Patrikthepiranha A and hot on their heels was No Plan Intended.

Patrikthepiranha A fired home in :27.2 to win by three-quarters of a length over No Plan Intended, while held on bravely to finish third and thus complete the finalists for Saturday’s $100,000 final.

“The main thing was to finish top three so I just took a shot coming off the gate and actually my horse was quite comfortable where he was sitting,” said Hennessey.  “Jody [Jamieson driving No Plan Intended] flushed me a bit and I was lucky to grab some cover. Then the last turn I made the move I had to make and came three-high and it worked.  I don’t think you’ve seen the best of him yet. Mark and Melissa Beckwith know their way around and how to get the best out of their horses. They do a great job.”

Hennessey watched the first two Trials from his base before flying to P.E.I. and was impressed by every one of the trial entrants and thinks Y S Lotus’ 1:50.1 track record is far from safe.

“It’ll scare the track record,” said Hennessey. “Regardless of post position I’d say Sintra will be your morning line favourite, but with nine horses lining up behind the gate post position is going to be so important. The tradition and the pageantry of this race it makes sure that nobody will be out there lolly gagging, they’ll be going.”

Melissa Beckwith trains the seven-year-old son of Four Starzzz Shark-Thats The Spirit for Thestable Patrikthepirana of .  The 22-time winner improved his year’s scorecard to 7-3-1 from 20 trips to the track.  He’s banked over $115,000 this year and more than $360,000 to date.

The Monday program also featured a pair of $16,480 Atlantic Sires Stakes three-year-old pacing colt ‘A’ divisions including an Atlantic Canadian record as Maximumlovin shocked the toteboard to win at 27-1 in the first division in 1:54.1 in line to trainer Clare MacDonald.

It was the fastest winning mile ever by a female driver on the Canadian East Coast. It was win number three of the Proven Lover three-year-old’s career as he shaved seven seconds off his former 2:01.1 lifetime mark for owner Ian Tate of .

Driver David Dowling scored a triple winning with Mister Rebbily A (1:53.4) for trainer Mike Dowling, Moonwriter (1:54.2) from the Colin Johnson barn and with Howmac Agustus (1:55.4) for trainer Earl Watts in a $3,000 Atlantic Sires Stakes ‘B’ division.

The other ‘B’ division was claimed by JJ Tommy (1:56.4) for driver Colin Kelly and trainer Jared Perrot, who celebrated the first stakes win of his young career.