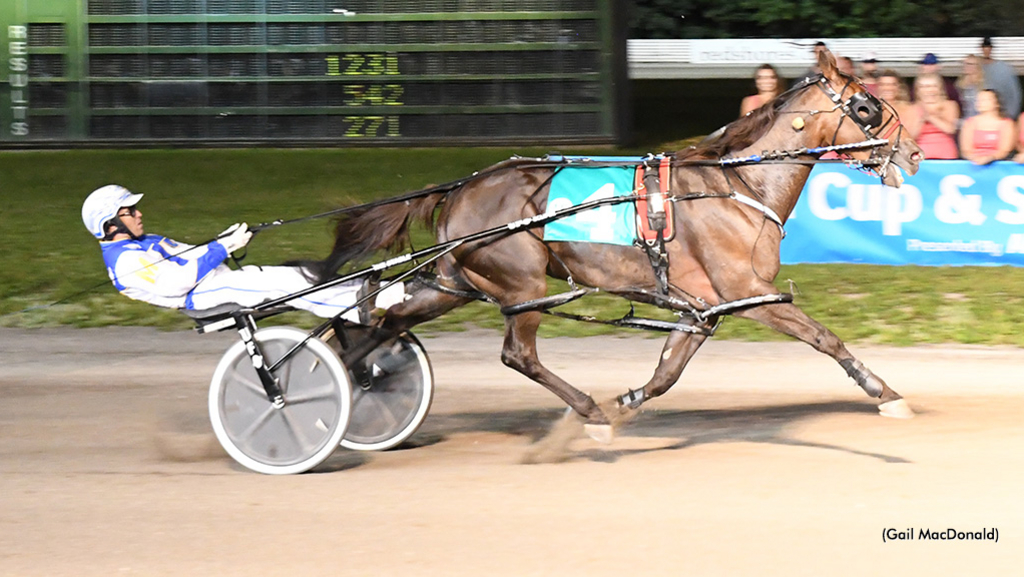 Canadian stalwart Sintra trekked his trade to Prince Edward Island to land himself in the province’s largest race after a 1:50.3 sizzler in the second of two $12,500 Gold Cup & Saucer Trials on Saturday night (Aug. 13) at Charlottetown Driving Park.

With James MacDonald returning home for the drive, Sintra sat third as Island Beach Boy posted heated fractions of :27.1 and :54.2 on an uncontested lead. MacDonald then made his move after the leader, who began to tire to three-quarters in 1:23.1. Sintra took over command to the final turn and slipped to a 2-3/4-length win over Major Hill with Laughagain Hanover taking third.

A nine-year-old gelding by Mach Three, Sintra won his 40th race from 110 starts and has now earned $1,523,807. Jamie Smith handles the training in P.E.I. for Sintra and his owner Thestable Sintra Group. He paid $2.80 to win.

MacDonald found himself in the winner’s circle of the other Gold Cup Trial behind Anthony Beaton pupil Ideal Perception, who scored a 1:51.3 victory as the even-money favourite.

Local star Time To Dance took the lead from the pylon post heading to a :27.1 first quarter and bore pressure from Bayfield Beach to a :56.1 half and through three-quarters in 1:24.2. Ideal Perception all the while sat the pocket and – when Bayfield Beach dropped anchor coming for home – had room to angle off the pegs and slide to a 1-1/2-length win over Time To Dance at the finish. Bettim Again rallied from near last for third.

A pair of $16,020 Atlantic Sires Stakes (ATSS) divisions also hit the track for three-year-old pacing fillies. Cougar On A Terr took the first division off a pocket ride to a 1:55.3 win.

Tobins Diva, the even-money favourite, set the tempo through a clip of :28, :56.3 and 1:26.1 with Mystical Gal advancing first over to the final turn. With Mystical Gal still at Tobins Diva’s side off the corner, Cougar On A Terr took to the inside and zipped by to a 1-1/4-length win. Tobins Diva held second with Orrsterror closing for third and Mystical Gal fading to fourth.

Walter Walker trains and co-owns Cougar On A Terr with Angus MacInnis. Don Gillis Jr. drove the daughter of Cougar Hall to her sixth win in 18 starts, pushing her bankroll to $26,070. She paid $10.40 to win.

Undefeated in her sophomore season, Therealprincess pushed first over to a 1:55.3 win in the other $16,020 ATSS “A” division for three-year-old pacing fillies.

Driver Corey MacPherson sat fourth with the Source Of Pride filly to a :27.4 first quarter before tipping off the pylons and beginning a steady advance towards pacesetter JJ Scarlett. Past a :55.2 half, the pace slowed and Therealprincess charged toward JJ Scarlett to race alongside the leader by three-quarters in 1:25.2. She then grabbed the lead and strode home a length winner over KCs Starlite, who stormed home for second. Woodmere Jazz rode the pocket for third and West River Glo finished fourth.

Eddy Doucette trains and co-owns Therealprincess, who is now seven-for-seven this season, with Blaine Thibeau, Gordon MacLeod and Grant Mann. She won her 12th race from 19 starts and has now earned $89,975. She paid $3 to win.

Rose Run Quest survived a first-over journey to win the $3,500 Preferred 1 Pace in 1:53.4. Driver Adam Merner moved the 10-year-old If I Can Dream gelding off the pylons after a :27.1 first quarter and made a steady advance towards pacesetter Woodmere Ideal Art through a :57.2 half and to three-quarters in 1:26. He gamely fought to the finish to win by three-quarter lengths over Bugsy Maguire to nab his 58th win from 188 starts. The Melissa Rennie trainee has now earned $258,097 and races for owners Blair Hansen and Isaac Schurman. He paid $11.30 to win.

Mantario rallied off a pocket trip to win the $3,150 Preferred 2 Pace. Driver David Dowling sat steady after a :28.3 first quarter while Burn Out Hanover set the pace while pressed by Screen Test through a :56.3 half and to three-quarters in 1:25.4. Dowling then rallied Mantario through the passing lane to win by 1-1/4 lengths over Nogreatmischief and Burn Out Hanover. Trainer Jennifer Doyle co-owns the six-year-old Sportswriter gelding with Danny Birt. He won his 22nd race from 113 starts and has earned $114,338. He paid $7.40 to win.