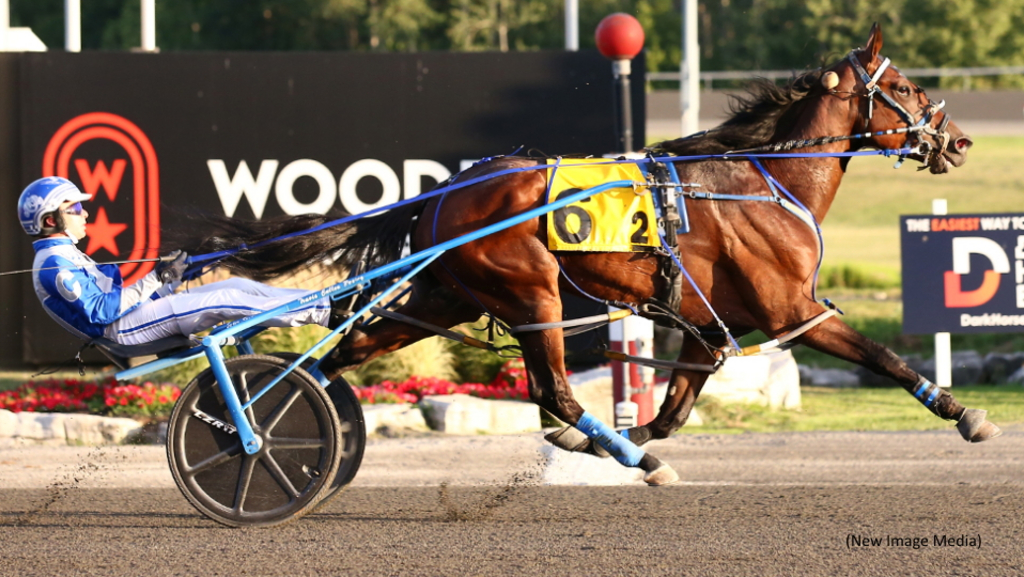 Pacing colts and geldings trekked to on Saturday evening as the oval hosted a trio of OSS Grassroots divisions for the sophomore set.

The first division went to a suddenly-streaking Dreamfair Arnie B for Team Cullen.

The homebred son of Sportswriter-Dreamfair Eternal got away third and held that position while Kaporal led the field through fractions of :26.2, :55 and 1:22.3. Dreamfair Arnie B was hustled first over around the final turn by driver Travis Cullen, and the favourite was knocking on the door as the group turned for home.

Cullen asked his colt to sprint, and the sophomore complied with a :27-second kicker. That was enough to propel him to the win by 4-1/4 lengths over Kaporal in 1:50.2. Stone Carver rallied to finish third.

Jodie Cullen trains the photogenic pacer for owner/breeder John Lamers of Mount Brydges, Ont.  With the win Dreamfair Arnie B now boasts a 4-2-1 record from 12 trips to the track this season. It was a new lifetime mark for the career winner of $54,616.

Twin B Jammer turned a two-hole trip into a 1:52.3 triumph in the second division for the tandem of driver Louis-Philippe Roy and trainer Francis Dumouchel.

The gelding left hard from Post 7 and dropped into the garden spot behind Sip Of Bourbon who carved out fractions of :28, :56.4 and 1:24.4. Twin B Jammer popped out the pocket in the lane and fired home in :27.3 to win by 1-1/4 lengths over Called In Sick. Sip Of Bourbon wound up third.

After an unproductive start to the season, Aviator came up big in his third start off the bench by winning the third division in 1:52.4 for driver Doug McNair and trainer Nick Gallucci.

McNair worked out a sweet, pocket trip for the son of Sportswriter-Epoxy Queen who managed to track race favourite Persistant Boy through fractions of :27.4, :56.3 and 1:25.1. McNair hustled his charge through a tight opening at the rail in deep stretch and Aviator’s :27.2 closing speed earned him the win by three-quarters of a length over Persistant Boy. Sporty M Three took home third prize.

Sent off at odds of 14-1, Aviator nabbed his fourth career win for owner-breeder Millar Farms of Stouffville, Ont.  The lion’s share of the $21,800 purse bumped his lifetime earnings to $119,109.