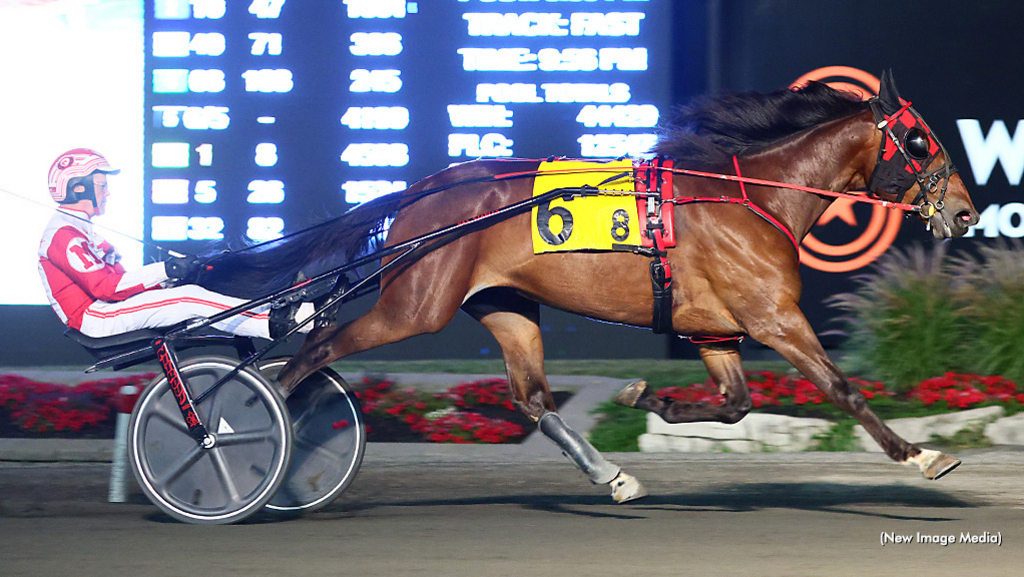 In the second $102,200 Gold division, Paul MacDonell settled the filly into mid-pack early, behind an opening panel of :28.3 set by Stonebridge Bravo. MacDonell made his move along the backstretch after Tyler Jones sent Winooski to the front and was promptly overtaken by Righteous Resolve as the field passed the half in :59.2. Stonebridge Bravo tried to track down the John Bax trainee, but Righteous Resolve would not be denied, winning in a time of 1:57.1 by 2-3/4 lengths.

“I thought Paul did a great job tonight to let them all settle in and then he came with her,” said Bax. “And I was impressed with [Righteous Resolve]. She’s a big strong filly and pretty masculine for a filly. I’m hoping that she can handle the big girls and keep on going.”

Bax’s first-year trotters are off to a strong start across the board. He’s had five two-year-olds make a combined 12 Gold starts for a record of 4-3-2.

The Gold action got underway earlier with Mass Hysteria leading gate to wire to notch her first win.

Trevor Henry piloted the Muscle Mass filly to an opening fraction of :28.2 and settled into a comfortable pace, leading the field through a :30.1 second panel for a half-mile time of :58.3. Doug McNair made a first-up move with betting favourite Sweet Detrmination midway through the backstretch and moved within a half-length rounding the far turn. Henry called on his filly as McNair slid into the pocket and the Kyle Bossence trainee turned on the afterburners. She came home in :28.4 to win by over five lengths in a final time of 1:57.

“I couldn’t be happier with the performance. I’ve always really liked her and it’s nice when it pays off,” said Bossence. “Three of us own her, and the other two guys jog horses for me every day. So, it’s nice that the home team gets the win.”

Bax trainee Its Your Choice rounded the top-three with Louis-Philippe Roy driving. It was the third-consecutive third-place finish for the Muscle Mass filly owned by Al Libfeld (Pickering, Ont.), and Marvin and Lynn Katz from Toronto, Ont.

Carla Cam ($5.70) won the second Grassroots division. Rodney Duford owns and trains the daughter of Artspeak while Chris Christoforou sat in the sulky.

All Bets Off continues his impressive freshman sire season with Grandeur Seelster ($6) winning. Marcel Barrieau conditions the winner for himself, Gestion Mastel Inc. and Courtney Gallant while Austin Sorrie engineered the victory.

Ima Doll ($18) dropped down to Grassroots after a fourth- and fifth-place finish in two Gold starts to pick up her first win with Trevor Henry aboard. Pentland trains and co-owns the daughter of Control The Moment with breeder Alan Bodin.

Cheese So Pretty ($4.70) and driver Sylvain Filion wrapped the night by winning her second straight start and for the first time in the OSS. Tony Beaton trains and co-owns the daughter of Betterthancheddar with David Mercer and David Lumsden.

(With files from Ontario Sires Stakes)