'Allisonann' Hoping For Success At Hanover 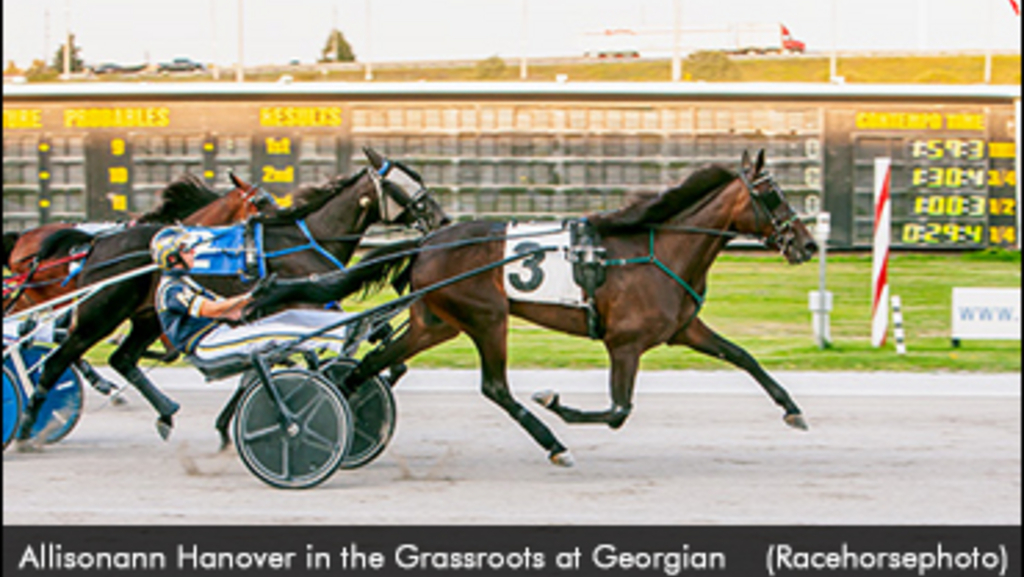 Ontario’s talented two-year-old trotting fillies are headed to Hanover Raceway on Saturday, Aug. 14 for the third Ontario Sires Stakes Grassroots leg of their campaign and trainer Mark Etsell is hoping Allisonann Hanover can pick up her second straight win in the last $21,450 division.

With Bob McClure in the race bike, Allisonann Hanover was a 1:59.4 winner at Georgian Downs on August 3, delivering an off-the-pace effort that impressed Etsell and his co-owners Graham Hopkins of Chesley, Ont., Chuan Tan of Cambridge, Ont., and Peter Porter of Port Dover, Ont.

“That was a good mile and she did it right, come home in 29 seconds, so we were good with that,” said former Hanover, Ont. resident Etsell. “She’s a big filly; I think she’ll be that much better next year. She’s good-gaited and honest, and doesn’t mind her work.”

Allisonann Hanover started her Ontario Sires Stakes career at the Gold Series level and finished seventh in the July 6 season opener at Woodbine Mohawk Park. Her stablemate Adare Castle has been a star in the top class, winning both of her Gold Series starts, so Etsell opted to move Allisonann Hanover down to the Grassroots for the second leg. The Rockwood, Ont. resident schooled both fillies over the Grand River Raceway half-mile before the July 28 Gold Series event, and said Allisonann Hanover handled the smaller oval with ease.

“She’s pretty good around a half. She skated around Grand River when we schooled them (July 21), but the other filly went by her so fast, that’s why I didn’t put her in the Gold,” said Etsell. “She’s a big, growthy filly that does everything right. She has speed, she just has to get stronger. She has all the parts there, she just has to fill in.”

Etsell will steer the filly from Post 5 in the fourth Grassroots division on Saturday and said the daughter of Archangel should appreciate starting near the middle of the seven-filly field.

“Two-year-old trotters, you don’t want to be inside too much, there’s too much confusion for them sometimes,” said Etsell. “You hit that first turn at least you can be wide if you have to be, you can square the turn up a little better, so I think it’s a good spot to be, five. But it’s two-year-old racing and anything can happen.”

If all goes well for Allisonann Hanover on Saturday and the filly remains happy and healthy through the following week, she is expected to return to Hanover for the Balanced Image eliminations on August 21. Hanover Raceway’s signature event for Ontario Sired two-year-old trotters, the $40,000 Balanced Image Final goes postward on August 28.

“That’s the plan,” said Etsell, who offered up $85,000 for the filly at last fall’s Black Book Yearling Sale. “A lot can happen between now and then, but it’s on the radar because there won’t be much for her before September.”

Following Saturday’s event, the two-year-old trotting fillies will not return to Grassroots action until September 13 at Woodbine Mohawk Park. They finish up the regular season on September 21 at Flamboro Downs and then the top 20 point-earners will return to Woodbine Mohawk Park for their $20,000 Semi-Finals on September 30, with the $50,000 Grassroots Championship slated for October 9. Allisonann Hanover is currently tied for fourth in the point race.

Post time for Hanover Raceway’s Saturday afternoon program is 1:30 p.m., and the two-year-old trotting fillies will be spotlighted in Races 3, 5, 7, and 9. Fans can register to attend in person or download a program and watch the live stream on Hanover Raceway's website.