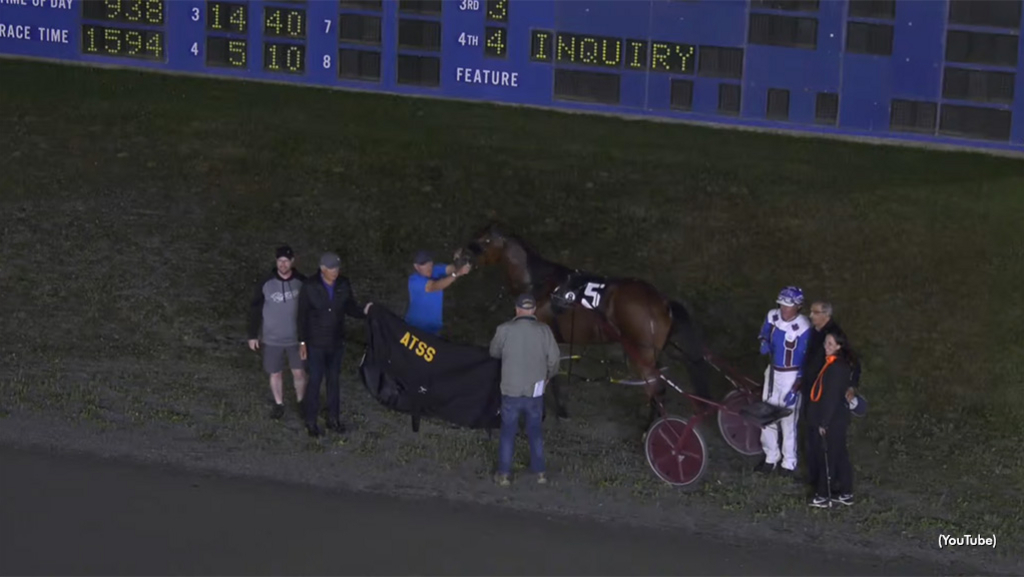 Driver Jason Hughes hustled the gelding from post five to the lead heading to a :30.1 first quarter and held firm to the finish. By a 1:00.1 half and through a light first-over challenge from Howmac Charmer to three-quarters in 1:30.4, Tobins Profit strode for home a 2-1/2-length winner over pocket-sitter Bacononabiscuit. Howmac Charmer finished third and Sue Warrior settled for fourth.

Malignity motored in the other ATSS “A” division for two-year-old colts and geldings to romp in 1:57. The gelding by Malicious raced wide through a :30.1 first quarter and charged for the lead as No Boats On Sunday strung him to a :57.3 half. But Malignity kept rolling up the backside and widened his lead to three-quarters in 1:27.2. His advantage opened through the stretch as he crossed the wire 11-1/4 lengths better than No Boats On Sunday while Nibbler finished another seven lengths back in third and Tobins Party rounded out the field.

Paul Langille trains and drives Malignity for owners Debbie Francis and Roseanne Langille. He won his fourth race from five starts and has now earned $21,938. He paid $2.20 to win.

The first of three $6,940 ATSS “A” divisions for two-year-old pacing fillies went to Entitled Express, who posted a coast-to-coast mile in 1:59.2. The daughter of Stonebridge Terror protected position from the pylons to race unchallenged through a clip of :30.2, :59.3 and 1:30 before stopping the clock in 1:59.2. Redland Misspretty finished second, beaten 1-1/2 lengths, with Howmac Jazzy Girl third and Gday Mate last.

Breeder Danica Ellis co-owns Entitled Express with Mark Dean. She broke her maiden with the victory while adding to her account now worth $4,477. Trainer Marc Campbell drove the $6 winner.

Similar wire-to-wire tactics landed Woodmere Jade in the winner’s circle of the second ATSS “A” division for freshman pacing fillies. Leaving from post three, driver Myles Heffernan Sr. secured the lead with Woodmere Jade to a :31.1 first quarter and chugged along the track through fractions of 1:00.3 and 1:31.1. She grew leg weary coming for home and pocket-sitter Howmac Julia sprung into action late, but the daughter of Rollwithitharry came to the line in time to win by a quarter of a length in 2:01. Rosetown Mary finished third and Marina Del Ray took fourth.

Gosistersoulsister took the last ATSS “A” split for fillies with another front-stepping effort, this one timed in 2:01.3. Driver Corey MacPherson pushed the daughter of Arthur Blue Chip to the lead to a :30.4 first quarter and avoided all trouble stacking behind her through a 1:01.1 half and to three-quarters in 1:32.3. Favourite Woodmere Macerena swung around traffic late and narrowed on the leader to settle for second, beaten 1-3/4 lengths, with Lookoveryour another five lengths behind in third and JJ Aurora finishing fourth.

Owned by Groupof7 Stable, Gosistersoulsister has now earned $4,473 in winning her third race from four starts. Jamie Smith conditions the filly, who paid $8.10 to win.

Racing concluded with a $1,700 Winners Over Pace won from off the speed by Thunder Alley. The six-year-old Mystery Chase gelding sat third while Betterthanbutter set a tempo of :27.4, :56.2 and 1:25.4 on the lead. Moving for the final turn, driver Paul Langille cued Thunder Alley to attack and the Rick Beaumont trainee rolled toward the pacesetter spinning for home to then edge a length in front to the finish of a 1:56.2 mile. Euchred rallied from the pocket for second while Betterthanbutter faded to third.