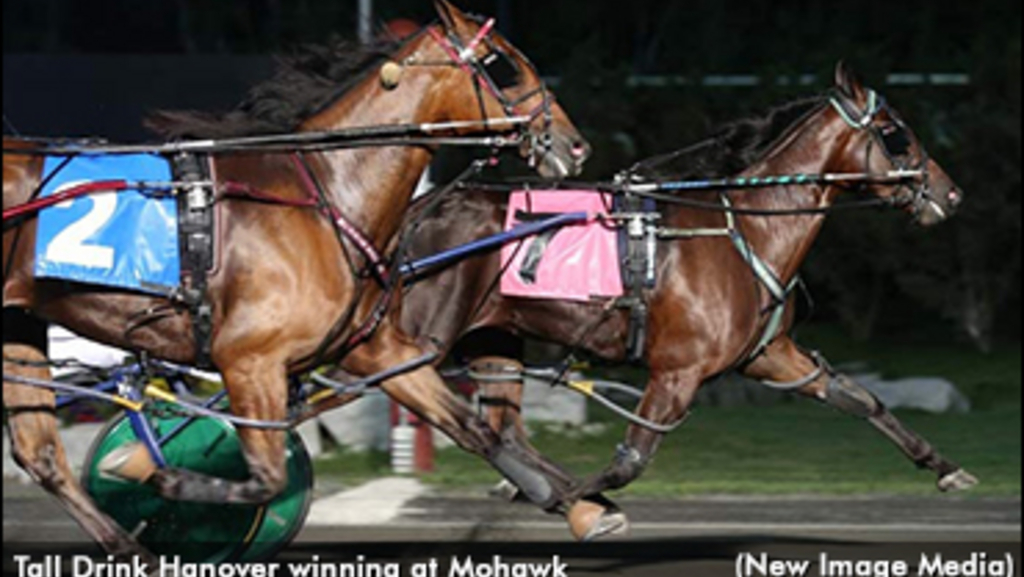 Trainer Tony Alagna and driver Brett Miller teamed up to sweep Tuesday’s opening round of the Whenuwishuponastar Series with a pair of Captaintreacherous fillies.

A group of 17 two-year-old pacing fillies were split into two $14,000 divisions.

Tall Drink Hanover converted off a two-hole trip to break her maiden and win the first division in 1:53.2. The daughter of Captaintreacherous shot home in :26.1 to defeat Beautyonthebeach by half a length. Abuelita Hanover and Beach Bar finished third and fourth, respectively.

A $35,000 Harrisburg yearling purchase, Tall Drink Hanover shipped in off a pair of third-place finishes in the Kindergarten Series at The Meadowlands. She is owned by Alagna Racing LLC, Marvin Katz and Riverview Racing LLC. She paid $7.60 to win.

Key West unleashed a stunning :25.4 last-quarter to win the second division in 1:52.4 for Alagna and Miller.

The daughter of Captaintreacherous swept up to the lead on the first turn and dictated the tempo, posting fractions of :27.4, :58.3 and 1:27. Prescient Beauty, who entered Tuesday’s contest two for two, shot out of the two-hole just before three-quarters to set up a final-quarter spring.

Key West briefly surrendered the lead but reclaimed in the final-eighth with her powerful strides and the help of a drifting Prescient Beauty to win by a little less than two-lengths. Deb finished third, while Tarryn A Strip was fourth.

Key West was a $130,000 Lexington Selected Yearling Sale purchase. The daughter of Captaintreacherous already has a mark of 1:51.1 and is now two for three for owners Brittany Farms and Brad Grant. She returned $2.50.

For the second night this week the two-year-old trotting colts and geldings demonstrated a serious level of skill in Ontario Sires Stakes competition, this time in three Grassroots divisions at Woodbine Mohawk Park.

In the first $19,850 division, Carey On and driver Doug McNair took control of the race heading by the half and cruised to a one-and-one-half length victory in 1:59.1. Early pacesetter Cousin Peter, who led the field to a :29 quarter and 1:01 half before the favourite took command and trotted to a 1:30 three-quarters, finished second and LMC Picasso was third.

“He behaved tonight, which is key with two-year-old trotters,” said McNair. “I thought if he stayed flat he would have a good shot, and even Grandma was here for her picture.”

McNair piloted Carey On to the win for his father, trainer Gregg McNair, and grandmother, Gwendolyn McNair who bred and owns the colt. A son of Kadabra and Nellie Mae Lavec, Carey On had started his Ontario Sires Stakes career in the Gold Series season opener at Woodbine Mohawk Park on July 16, but made an early break and finished seventh.

All three of the divisions were captured by homebred youngsters, with the other two hailing from the barn of Hall of Fame horseman Bob McIntosh.

Royal Rob was the first of the McIntosh trainees to grace the Grassroots winner’s circle. Getting away fourth from post one, Royal Rob made a powerful move to the front heading past the :59.2 half and then maintained his speed through a 1:28 three-quarters and on to a 1:56.1 victory. Pocket-sitter Okeanos moved at Royal Rob in the stretch, but the leader held him at bay and secured a one-half length victory. Royale Elite was well back in third.

“He was a standout all winter training and he got a little bit off in spring, just kind of some growing pains, and I backed off on him, just gave him some time, because you can’t fight with Mother Nature,” said McIntosh of the son of Royalty For Life and Armbro Chelsea. “Now he’s turning out to be the horse I thought he was. I was very high on him last winter. I thought he was one of the better trotters I’ve had for a while and he’s proving me right now I guess.”

Tuesday’s outing was Royal Rob’s first and came after just one qualifier, a 2:01 effort at Woodbine Mohawk Park on July 24. McIntosh bred the colt and owns him in partnership with Dave Boyle, Gordon Wright and Randy Liepa. Royal Rob’s 1:56.1 clocking makes him the fastest two-year-old trotter in Canada so far this season.

“He’s a heck of an individual, he’s very strong,” said McIntosh. “Last summer, or the summer before I was up at David Heffering’s farm [Tara Hills Stud] and I saw Royalty For Life, and he’s the spitting image of his Dad, same colour and same build, same everything.

“Hopefully he can make half as much money, I’m not greedy, just half as much,” added the horseman with a laugh. Royalty For Life earned $1.6 million in a standout career that included victories in the Hambletonian and Canadian Trotting Classic.

The final division went to McIntosh trainee Judge Ken, who fired out of post 10 and led the field through fractions of :28.2, :59.1 and 1:28.2 on his way to a two-and-one-half length victory in 1:57.3. Scarlett Raider finished second and Clothier Hanover completed the top three.

The win was Judge Ken’s first in four starts. The son of Justice Hall and Barbie And Ken finished third in the Grassroots season opener at Georgian Downs on July 17, made a break and finished seventh in a June 28 overnight and stayed on gait for a second-place finish in a June 21 overnight, both at Woodbine Mohawk Park. McIntosh, Dave Boyle and C S X Stables of Liberty Center, Ohio bred and own the gelding and Bob McClure stepped into the race bike for Tuesday night’s victory.

“He’s a nice little horse, not very big, but really mature,” said McClure. “He did well to overcome the 10-hole. It’s hard for young horses to do.”

Off their impressive efforts, Tuesday’s winners will now have to decide whether to remain in the Grassroots Series for the third leg at Hiawatha Horse Park on August 11 or take on the Gold Series colts at Woodbine Mohawk Park on August 9.

This Saturday, August 4 the three-year-old pacing colts will be part of Woodbine Mohawk Park’s Civic Holiday celebrations, which features fireworks following the races. The pacing colts will battle in a pair of Gold Series divisions, scheduled as races six and nine.

(With files from Woodbine Mohawk Park and the Ontario Sires Stakes)