Babies And Stars At The Big M 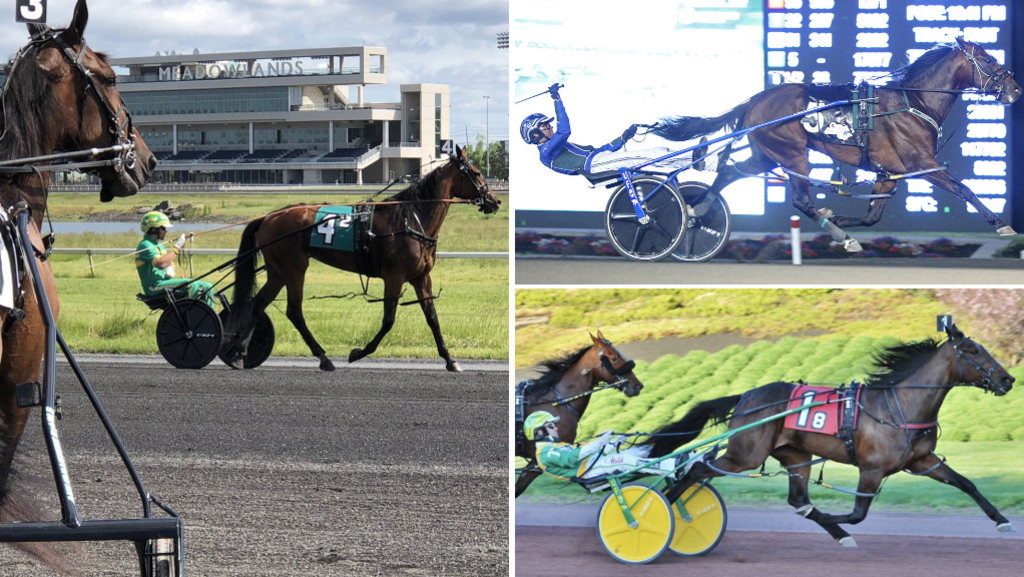 The Meadowlands was blessed with another beautiful summer morning on Saturday (July 9) for the Fantasy Announcer Camp edition of Breakfast With The Babies.

The track was fast and temperatures hovered in the mid-70’s when things got underway at 9 a.m. The Meadowlands would like to sincerely thank Jules Siegel for his sponsorship of the event over the past several seasons under his nom de course of Fashion Farms.

Trainer Tony Alagna had another big day with five winners on the card from seven two-year-old races.

The first two baby races on the day were for pacing colts and fillies respectively, all horses in both fields raced out of the Tony Alagna barn and all were sired by top horses that Tony trained, the great Captaintreacherous and first crop sire Stay Hungry.

Stormalong (Dexter Dunn) converted a pocket trip into victory with Hungry Angel Boy (T. McCarthy) flying late but falling just short to be second. Captain Batboy (Andy McCarthy) had made the pace through three quarters in 1:25.3, setting up the :26.4 sprint home in the 1:52.2 mile.  Stormalong was a $35,000 Harrisburg bargain for Brad Grant and Steve Heimbecker. Vieux Carre Farms and Lin Higgins bred the Stay Hungry colt.

Caviart Davia (A. McCarthy) laid down even fractions in the fourth and tried to shake the competition with an early stretch sprint, but alas could not withstand the powerful close of stablemate Caviart Marcella (Scott Zeron), who went zooming by from well back through the :27.3 end to a 1:54.3 mile. The winner is a Caviart Farms homebred by Stay Hungry.

Alagna colts finished 1-4 in the fifth race. Todd McCarthy put Caviart Stoney on the lead by the :57 half and held sway until Captain Van Gogh (Dunn) and Dupree Hanover (A. McCarthy) came-a-callin' as they turned home. Those two dueled through a :26.3 end to the 1:52.1 mile, with 'Van Gogh' leaving a lasting impression with the win. The Captaintreacherous colt was a $62,000 Lexington Selected Yearling Sale buy for Pryde Stable, Daniel & Jean Christophe Plouffe, JAF & Gordon Stables. Brittany Farms and Mel Hartman are the breeders.

Colt trotters were next. Brian Sears cut the mile with Bullseye Hanover and led until the final strides when Jazz In Jackson (T. McCarthy) picked him up through the :28.2 end to the 2:01.3 mile as Talkin Bout You (James O’Donnell) closed inside for second. It was another win for the Alagna Armada with Tony owning the son of Muscle Hill in partnership with Pryde Stable, Jim Crawford IV and breeder, Coyote Wynd Farm. The winner was a $50,000 Lexington Selected Yearling Sale purchase.

Race seven saw leader Air Power (Sears) roll off onto a break on the last turn, leaving Take My Name (Dave Miller) in front to duel gamely with but ultimately succumb to Upnaway Blue Chip (Yannick Gingras) through the :28.4 end to the 1:58.4 mile. The winner is a Blue Chip Farms-bred Chapter Seven colt, bought in Lexington last fall for $165,000 by Lindy Farms, Stemberg, Anderson & Rudolph and is trained by Domenico Cecere.

Marcus Melander trainees took turns on the lead with Kayleigh S (Sears) releasing Heaven Hanover (Tetrick) through the middle fractions, then tipping off that one’s back to surge by late in the 29-second final quarter for the narrow 1:59.2 win. Kayleigh S, who already boasts a stakes win with a division of the NYSS at Saratoga in June, is a Courant Inc. homebred Chapter Seven sister to the sensational Joviality S.

Baby racing ended with Tony Alagna celebrating his fifth winner of the day with the Father Patrick filly Heart On Fire (Dunn) who converted a perfect trip by closing out her impressive 1:56.3 win with a :28.3 final quarter. Crawford Farms owns the winner, who was bred by Spring Haven Farms and Doug Millard.

The day actually began with a few qualifying races, the first for pacing fillies and mares. Quantity was low with a field of just three, but the quality was very high and Queen Of Success (Andy McCarthy) set all the fractions until the unbeaten current “queen” of the sophomore crop Treacherous Dragon slipped out of the pocket mid-stretch and by the leader through the :26.2 final quarter of the 1:52 mile for Tim Tetrick. Hot Mess Express (Dexter Dunn) was third. Hot Lead Farm owns, and Nancy Takter trains the winner.

The second race was another three-horse qualifier featuring North America Cup winner Pebble Beach (Todd McCarthy), who was ineligible for the Meadowlands Pace via the Stallion Restriction Condition. Imaginary Line (Dunn) cut three-quarters in 1:25 before McCarthy popped Pebble Beach from the pocket and roared by for the win in 1:51.2. Noel Daley trains the winner for Patricia Stable, Country Club Acres, Sbrocco and Laexpressfoderadeovolente.

It’s a big night at The Meadowlands with the BBQ Extravaganza, $750,000 Graduate Series finals and Meadowlands Pace eliminations, leading into next Saturday’s “Greatest Party in Harness Racing”. First post time is 6:20 p.m.

The Meadowlands races will be carried live on Fox Sports 2 in concert with NYRA's "America's Day At The Races" from 8:00 to 11:00 tonight.

Jessica Otten and Gabe Prewitt will do the hosting live from The Meadowlands where Grand Circuit stakes include the four Graduate Series finals with the sport's top four-year-olds vying for $750,000 in purses and two $50,000 eliminations for next Saturday's $600,000 Meadowlands Pace.

Meadowlands racing will be back for the Pace night finals next week and again on Hambletonian Day, Saturday, Aug. 6.

Free programs for tonight's races, which begin at 6:20, are available on The Meadowlands website.