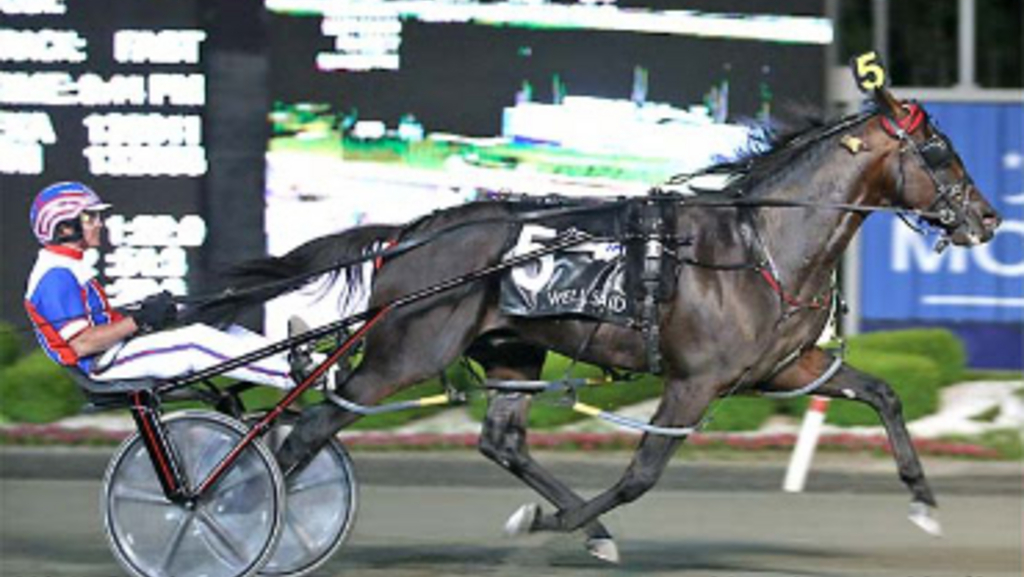 One of three horses entered by trainer Steve Elliott, Well Said tops the field for the first of the two $50,000 eliminations for the Meadowlands Pace on Saturday, July 12. He will start from post six with Ron Pierce in the sulky.

The first five finishers in each elim will advance to the nation's richest event for sophomore pacers on Saturday, July 18 at the Meadowlands. The pair of $50,000 eliminations are carded as races five and seven on Saturday night.

With seven victories and nearly $1.3 million in earnings, Jeff Snyder and Lothlorien's Well Said is the richest of the Meadowlands Pace contenders. His 1:48.1 score in the Pepsi North America Cup on June 27 at Mohawk was a stakes, track and Canadian record. His biggest win at two came in the $700,000 Breeders Crown at the Meadowlands, which he won by a length over Art Colony in a season's best 1:51.

Well Said will try to become the eighth colt in history to win both the Pepsi North America Cup and Meadowlands Pace. His stablemate, Pair A Dice, will start from post four in their elimination, while Elliott's other contender, Mysticism, drew post eight in the second of the two elims.

"He had something left," said Ron Pierce of Well Said's decisive Pepsi North America Cup win. "I don't see any reason why he can't continue what he's doing and beat these colts in the Pace, too."

Art Colony, runner-up to Well Said in both the Breeders Crown and North America Cup, will face his nemesis once again in their Pace elim. The Casie Coleman trainee will leave from post five.

Passmaster Hanover, winner of the $500,000 SBOA/Anthony Abbatiello New Jersey Classic on June 13, looks to rebound in the Pace elims after being scratched with a pus pocket last week. He will start from post six in the second of the elims, race seven, for trainer Blair Burgess and driver Tim Tetrick.

The eliminations of the Meadowlands Pace share the spotlight on Saturday with the $688,000 William R. Haughton Memorial for free-for-all pacers. The Haughton features the first major battle between two-time Older Pacer of the Year Mister Big and Art Official, the 2008 Meadowlands Pace winner.