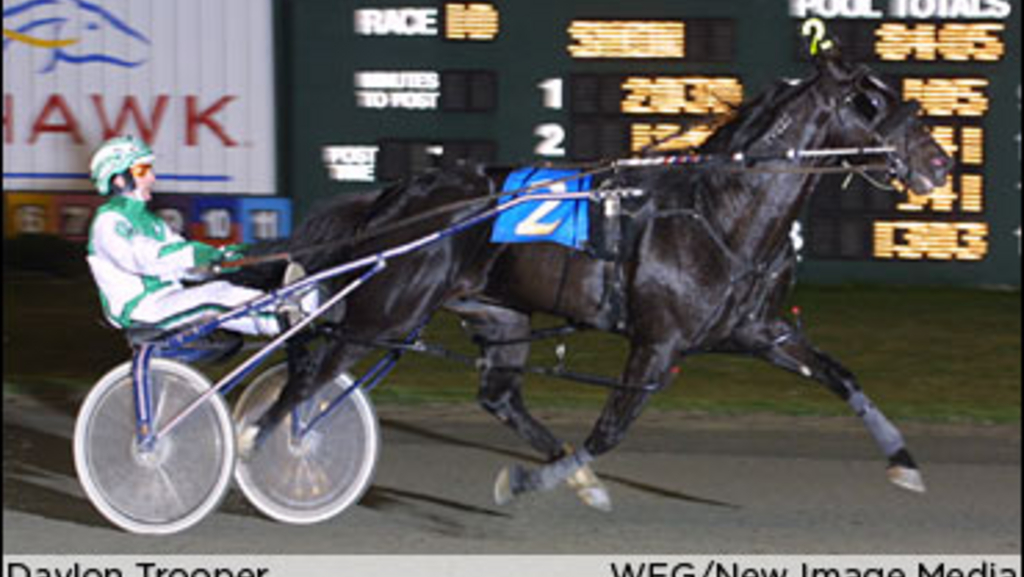 Scarborough Downs's Michael Sweeney has composed the following obituary honouring the great Daylon Trooper, who was euthanized on Sunday, July 5

We lost one of the great ones this weekend.

Millionaire pacer Daylon Trooper was euthanized in the wee hours of the morning on Sunday, July 5 after suffering catastrophic injuries in a stable related incident, just one evening removed from recording the 43rd win of his illustrious career at Scarborough Downs

Daylon Trooper won the final race of his career at Scarborough Downs on the Fourth of July program.

As dawn broke quiet over southern Maine that morning a noble creature was called away. A note passed in a morning meeting informed me of his fate. It simply read “Daylon Trooper is gone” but the passing of such a giant should be trumpeted with much more fanfare than that.

I met him only once, just days after he arrived at Scarborough Downs. I couldn’t wait to lay eyes on one of harness racing’s elite.

He was a fine looking animal, shiny and strapping, endowed with the presence and bearing that only those who have been to the big time could ever possess. He came to my hand as I grabbed onto his halter and he even allowed me to pat him on the forehead once or twice. His tolerance quickly gave way though as he tired of the attention and began a playful game of trying to chew off the newcomer’s hand. Apparently even star players can tire of the attention of their adoring fans.

His loss was felt deeply at Scarborough Downs this weekend.

“The only word that can describe this situation is heartbreaking,” said longtime Scarborough trainer Dana Childs. “It was a heartbreaking end to a brilliant career.”

What a career it was.

He was bred in the purple, one of the most successful sons of the great stallion Camluck, who was crossed in this fortunate instance with the Big Towner mare Ara Newton. He was owned at the end by David MacDonald of Halifax, Nova Scotia.

Although a factor in Ontario Sire Stakes action, Daylon Trooper earned the lion’s share of his impressive bankroll in the work-a-day world of overnight racing. He won only one purse race in excess of $100,000, but was a constant presence at the Open level in New York and New Jersey through the mid-portion of this decade before becoming the terror of the upper claiming classes toward the end of his career.

Trainer Jason MacDougall’s attempt at stoicism would fail when he emotionally talked of Daylon Trooper in the paddock on Sunday.

“I only had him a short while but he was a really nice horse to have -- a joy to have. You’d never know he was a stud, classy out on the racetrack, just a nice horse to be around. He was a friendly and kind horse -- very kind.”

The highs and lows that are part and parcel of our close to the skin industry were never so poignantly displayed as they were this weekend. The realization that the triumphs that we all strive for can be so quickly dashed by tragic circumstance can cause even a strong brave man to crumble to his knees.

Daylon Trooper was a kind horse who met an unkind end. He went out on top, he went out a winner, and he died with his boots on. And in the final analysis, can we ask anything further from our heroes?

Lovely comments posted regarding Daylon Trooper were very much appreciated. Thank you Michael Sweeney and Scarborough Downs - there were many people's lives Trooper entered over all his years, he is remembered by many, especially by our family. Watching him all these years was such a joy. Thank you, Dave and Mary Lemon.

How sad. I remember when he

How sad. I remember when he raced at Woodbine. May he RIP.