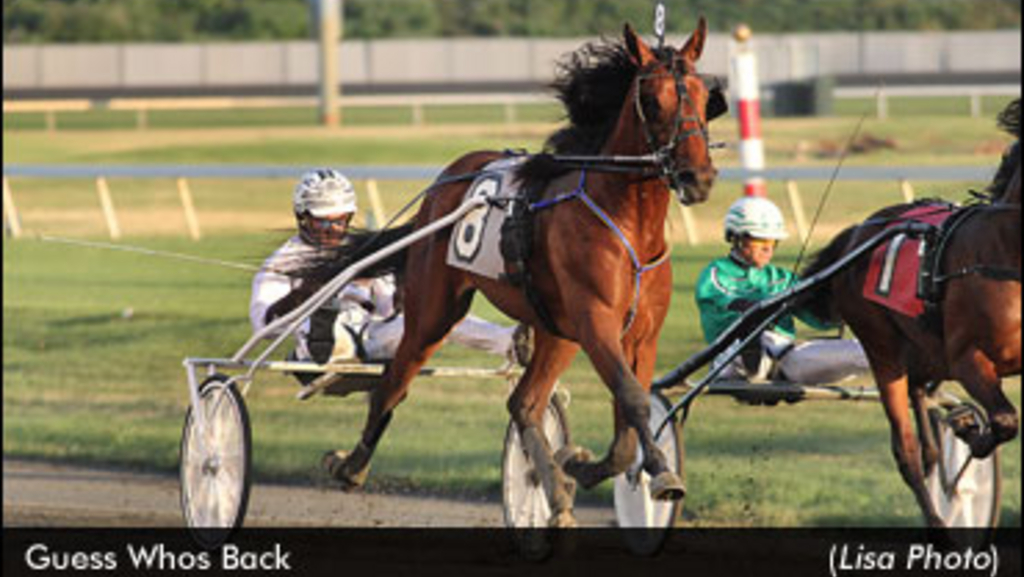 Guess Whos Back benefited from a quarter-mile duel between Stonebridge Force and Canepa Hanover to win the $40,500 second round New Jersey Sire Stakes for two-year-old trotting colts and geldings on Friday, July 4 at the Meadowlands Racetrack. In the $39,500 filly division, Mission Brief trotted a stakes record 1:55.1.

In the colts’ race, Stonebridge Force (sired by Muscle Hill) and driver Ake Svanstedt would not relinquish the lead and the rail to 1-5 favourite Canepa Hanover (Muscle Hill) as the two battled down the backstretch. Early in the turn for home Canepa Hanover broke stride, leaving Stonebridge Force on a clear lead until Brian Sears, who won both ends of the early Daily Double, sent Guess Whos Back sprinting in the stretch. The son of Muscles Yankee–Shes Gone Again took the lead in the final eighth and clocked a career-best 1:57 flat, with a last quarter in :29 seconds, winning by a length and a half over Stonebridge Force. Guess Whos Back returned $12.60 to win. Falk On Hill (Muscle Hill), entrymate to Canepa Hanover, saved the bridge-jumpers, finishing third by eight and three-quarter lengths.

Guess Whos Back, a $90,000 Harrisburg Sale purchase, was making his second career start, having broken stride in last week’s opening leg of the New Jersey Sire Stakes. The Nikolas Drennan trainee picked up the winner’s share of $20,250 for owners Joseph Davino of Clarksburg, New Jersey and Brad Shackman of Calgary, Alta. He was bred by Diamond Creek Farm of Kentucky and Melvin Hartman of Ontario.

Mission Brief, who broke stride early in last week’s first leg, was carefully timed to the starting gate by driver Yannick Gingras and had the lead from first call to the finish line. The 3-5 favourite, Saturday Mornings, was second by nine and three-quarter lengths. It was 12 and a half lengths to Demons N Diamonds in third. All three top finishers are daughters of Muscle Hill.

The Ron Burke trainee, out of the Breeders Crown winner Southwind Serena, paid $7.20 to win. The win was the filly’s first in two starts, earning $19,750 for the partnership of Burke Racing Stable of Fredericktown, Pennsylvania, Our Horse Cents Stables of Clifton Park, New York, J&T Silva Stables of Long Beach, New York and Weaver Bruscemi of Canonsburg, Pennsylvania. The $150,000 Lexington Selected Sale purchase was bred by Steve Stewart of Kentucky, Black Creek Farm of Indiana and Andrea Lea Racing Stables of Quebec.

The $30,000 Free For All Handicap for pacing mares featured a quintet of mares prepping for the Golden Girls next week. It was one of those five, in fact, odds-on favourite Shebestingin, who scored a neck victory over a very game Mattie Terror Girl in 1:50.3. Jerseylicious established the early pace, but was quickly shuffled back through a quarter of :26.4 and a half-mile in a rapid :53.2. Mattie Terror Girl made a steady grind to the lead and turned for home with the lead through three-quarters of 1:21.1. 'Mattie' dug in, but simply could not hold off the classy Shebestingin, who scored the victory for Dave Miller. Both mares look poised as major contenders in the Golden Girls on Meadowlands Pace night. Charisma Hanover finished a solid third.

The following race, a C-1/B-2 Handicap, saw Aunt Caroline make her 2014 debut a winning one, scoring a sharp 1:51.3 victory. Aunt Caroline is also Golden Girls eligible and figures to go postward in that event on Pace night as well.

There will also be a spectacular fireworks show following the live racing program.