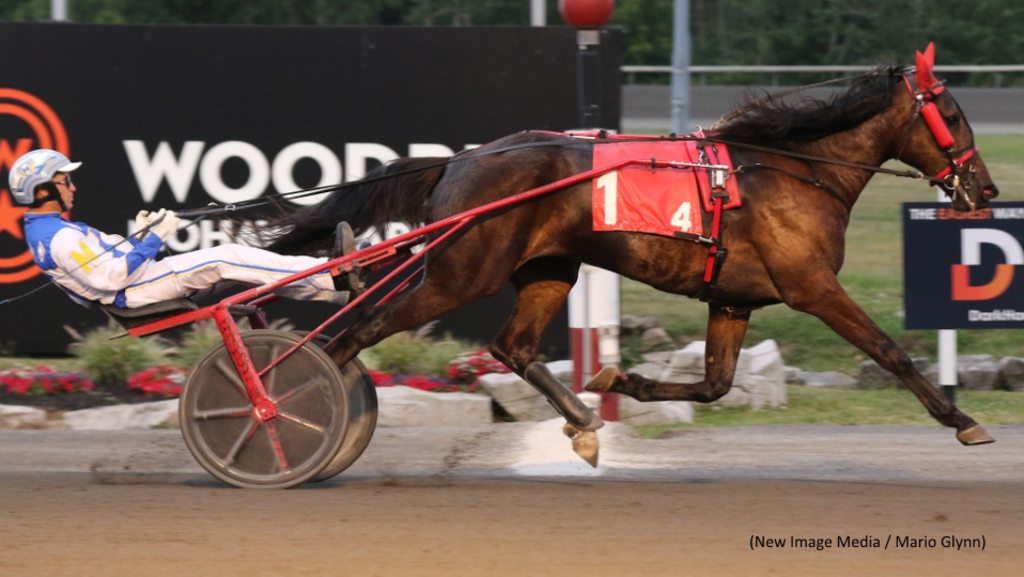 Big money was up for grabs at Woodbine Mohawk Park on Monday evening as two-year-old trotting colts and geldings were in town battling in a trio of OSS Gold Series divisions.

Mass Market turned a two-hole trip into a 1:56.1 triumph in the first split for the team of driver Trevor Henry and trainer Bob McIntosh.

The son of Muscle Mass-Pier Ho La Donato dropped into an early pocket position while race favourite Snowpiercer marched to the lead and laid down fractions of :29.1, :59.1 and 1:28.3.  Henry angled his charge to the outside at the head of the stretch, and the gelding kicked home in :27.1 to win by a neck over Snowpiercer.  The Great Emotion rallied to finish third.

“I knew going into tonight he had a good shot. He’s a nice colt,” said Henry. “With Paul’s horse, it’s tough with a young horse on the front, they get a little green, and that’s probably the reason I picked him off late.”

Robert Mcintosh Stables Inc, Doug Mcintosh and Randy Liepa share ownership on the speedy youngster who was a solid runner-up in his debut at on June 24.  The rookie’s bankroll climbed to $39,267 with the win.

Oh Look Magic went to the front and didn’t look back in the second division for driver James MacDonald and trainer John Bax.

“I think it showed tonight that he’d been to the front, because he wanted to go there again,” said Bax. “Going forward we are going to have to work on that.”

Bax Stable and The Cavalier Stable share ownership on the gelding with his breeder, Glengate Farms.  The freshman is now two-for-two to start his career.  The lion’s share of the purse boosted his bankroll to $43,267.

Dowedealinandwhy accepted an early pocket trip in the third division, but he didn’t there for very long for driver Sylvain Filion.

The son of Wheeling N Dealin-Gaelic Princess watched Deadline Hall supply an opening quarter in :29 before popping out of the pocket and charging to the top.  Once on the lead, the gelding sailed through middle fractions of 1:00.2 and 1:30.3 before rocketing home in :27.2 to win by 1-3/4 lengths over Deadline Hall in 1:58.  Taking home third prize was Templeton.

“Any time you have the rail with a two-year-old trotter, you don’t know how they are going to act,” said Fellows. “We were cautious because you don’t want to get away fifth and come first up for a half-mile. It was more of a see what happens.

“(Sylvain) cut out very nice fractions for him, and he was able to sprint in the lane,” Fellows continued. “Now it’s all about keeping him healthy and sound for the rest of the season.”

Rob Fellows trains the rookie for Yolanda Fellows and Irene Carey.  He’s now two-for-two to kick off his career, and in the process he’s managed to bank $43,717.

(with quotes from OSS)